Y’all Means All: Texans are all in for equality 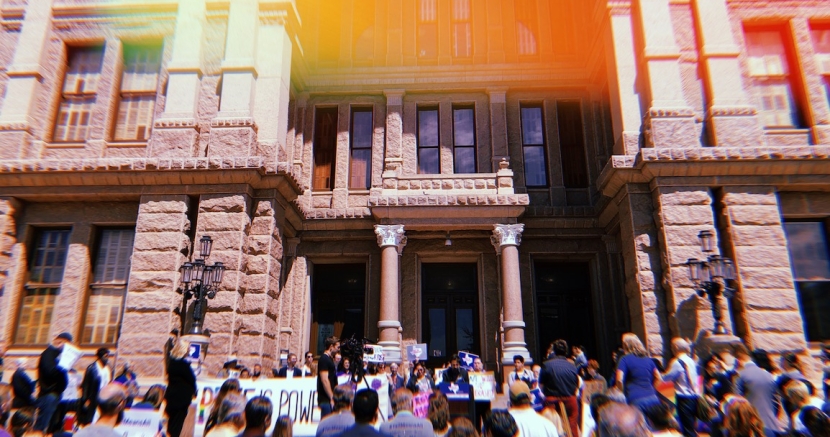 Chants of “Y’all Means All!” could be heard throughout the Texas Capitol grounds today as the Equality Coalition brought folks together for All in For Equality Advocacy Day.

Our friends at the ACLU of Texas, Human Rights Campaign, Equality Texas, Texas Freedom Network, Transgender Education Network of Texas put on today’s advocacy day and empowered LGBTQIA+ Texans and allies to raise their voice during this legislative session.

Advocates now have the opportunity to ask state leaders to pass inclusive policies that protect all Texans, including our children; and end discrimination based on sexual orientation and gender identity or expression.

Last session was dominated in large part by Lt. Governor Dan Patrick’s so-called bathroom bill that threatened the ability of transgender Texans to live authentically and without fear. But because progressives showed up in the 2018 midterm elections, many of the legislators who were backing this hateful legislation have been voted out of office. Our representatives have taken notice and changed their focus from legislation that divides us, to a proactive agenda that supports the health, safety, and well-being of all Texans, regardless of who they are or who they love.

These changes come during a historic session as five lawmakers decided to form the Texas Legislature's first LGBTQ caucus, chaired by Rep. Mary González. This caucus is championing legislation to empower all Texans to live without fear, a remarkable change from just two years ago.

Now, this doesn’t mean Dan Patrick has given up his old tricks (if only.) We’ve got a watchful eye on some of the bad bills that target LGBTQIA+ Texans, like Dan Patrick's SB 17, the license to discriminate bill, and SB 15 that would preempt local non-discrimination ordinances.

Here at Progress Texas, we’re also following proactive legislation like House Bill 84, which would repeal the section of the Texas penal code that lists "homosexual conduct" as a crime. The U.S. Supreme Court has already ruled that this section cannot be enforced, but it remains on the books (sigh.)

We’re also following HB 3281, which would limit the use of the so-called "gay panic" legal defense. Current law allows perpetrators of LGBTQIA+  murders to receive a lesser sentence or avoid conviction by placing blame on the victims perceived orientation. This unequal protection of the laws creates validity for crimes against members of the LGBTQIA+ community and discredits efforts to promote equity and justice.

Every Texan deserves the dignity and respect of living without fear, no exceptions or exclusions. Incredible strides have been made to support the queer community, but there is still a hard fight ahead.

We believe in a big-hearted Texas that is inclusive and welcoming to everyone who lives here, and when we say y'all means all–we mean it.