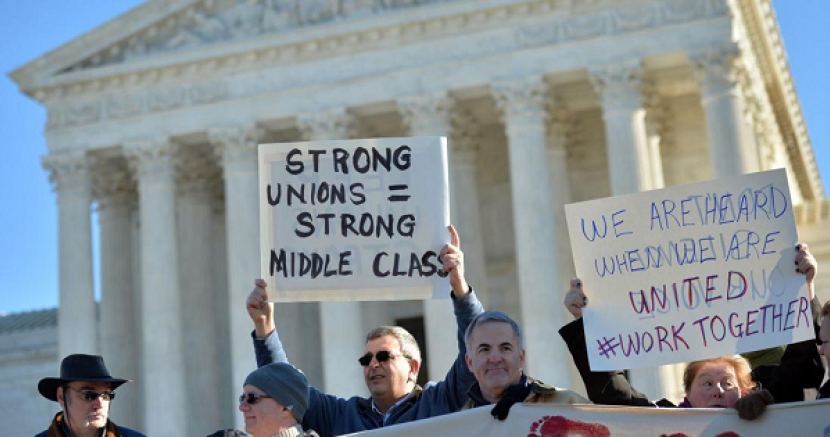 Huge news out of the Supreme Court today, as a 4-4 ruling has ended the greatest threat to unions in over 40 years.

The case in question involved whether non-union employees still have to pay limited fees for working at a unionized office or business. The reason those fees are required is to counter-act the free-rider problem, where someone who is not part of the union still enjoys the benefits of the union.

Conservatives have tried to eliminate this rule for years, in their further attempt to gut unions. Today's loss is a blow to their efforts.

From Think Progress' post, The Biggest Legal Attack On Unions In Decades Is Dead:

On Tuesday, the Supreme Court announced the widely expected consequence of Scalia’s encounter with his own mortality. In a single-sentence order, the Supreme Court announced that the judgment of a lower court rejecting this effort to defund public sector unions “is affirmed by an equally divided court.” Friedrichs v. California Teachers Association is dead. A four-decade-old opinion protecting public sector unions shall live to see another day.

Because the court is split following the death of Justice Antonin Scalia, today's 4-4 ruling means that the lower court's decision stands - for now.

If a Democratic president -- either President Obama or the Democratic nominee in 2017 -- is able to replace Justice Scalia, then today's ruling will likely stand for decades. However, if a Republcian wins in November, today's victory could be short-lived.

Which makes today's ruling yet another example of why courts matter, and why anyone who cares about public policy must also support filling judicial vacancies in our courts.

UPDATE - Here is a statement from AFL-CIO President Richard Trumka on today's ruling:

Today, working people have persevered in the face of another attack on our rights. All over the country working people are showing that we won’t allow wealthy special interests or their politicians to stand in our way to join collectively and make workplaces better all across America. In the face of these attacks we are more committed than ever to ensuring that everyone has the right to speak up together for a better life.