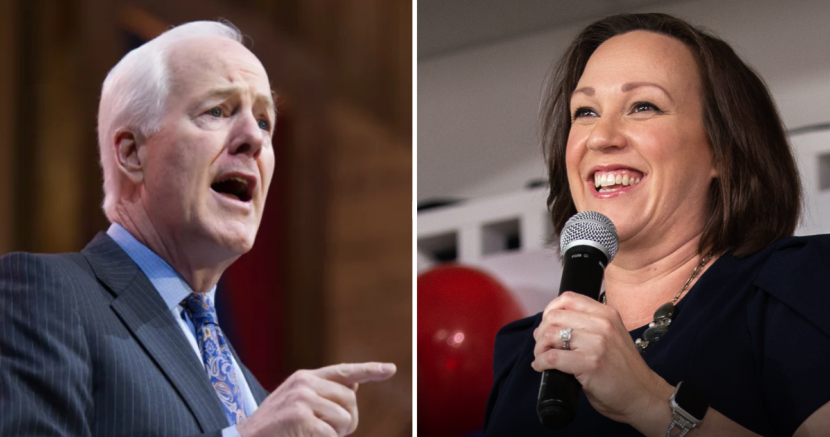 Abby Springs
MJ Hegar wants three debates. Cornyn has only agreed to one.

After a long summer of campaigning, U.S. Senator John Cornyn has finally agreed to debate MJ Hegar. Airing on October 9th, the debate will be the first chance for Texans to compare the two candidates side-by-side. If Cornyn has his way, however, it’s going to be our only one.

Democratic nominee MJ Hegar has enthusiastically agreed to two more debates before the election on November 3rd, each televised statewide to Texans. But Cornyn has refused to commit, his campaign only saying he would “consider other opportunities.” For the Republican senator, that’s code for “never going to happen."

Cornyn has a long history of worming his way out of public scrutiny. In 2008, during his first fight for reelection, his opponent asked for no less than five debates on issues that mattered to Texans. Cornyn only agreed to two. In 2014, Cornyn just debated once, and it only aired on TV on C-SPAN and Spanish-language channels.

Cornyn likes to stay out of the spotlight. That’s why, even though he’s a third-term senator, 63% of Texas voters either dislike him or don’t know him. For Cornyn, he would prefer that his shameful voting record over the last 18 years remains quiet so he can mislead Texans about who he’s really serving in Washington (hint: it’s the big corporate donors).

When Cornyn is on stage with MJ, he won’t be able to hide behind his usual misinformation and lies. MJ has a long history of standing up to those in power, and she won’t be shy about calling Cornyn out on his positions for dismantling the Affordable Care Act, against extending unemployment protections, for immigration detention, and against civil rights.

On the other hand, MJ is ready to talk about the issues facing Texans — the issues that she’s been talking about for months. From Medicaid expansion, to accessible childcare, to testing and tracing for COVID-19, she knows what problems our state is facing and the progressive solutions we need to fix them. Unlike Cornyn, MJ will take as many chances as she can get to show Texans that she’s ready to stand up for them.

For now, John Cornyn is our senator. But two-thirds of Texans either don’t know or don’t like him. He should be able to face the people of Texas, because a real Texan isn’t afraid to get up on stage and fight for what they believe in.  We deserve real Texas leaders who aren’t afraid to stand up and fight for us.