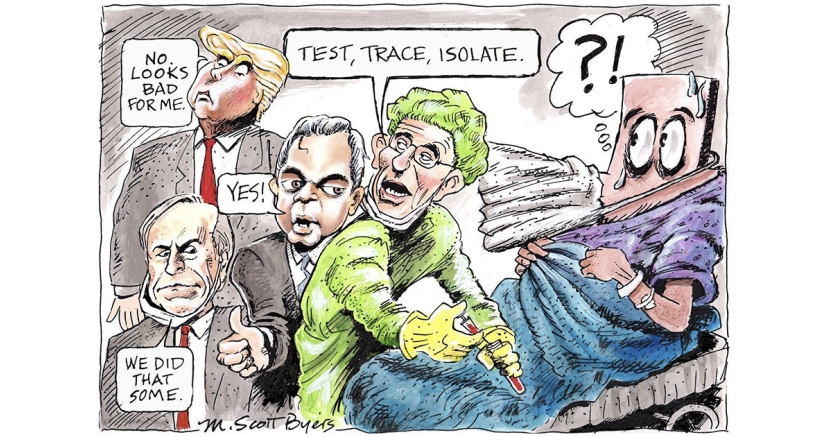 What happened to testing and tracing the virus?

Illustration by M. Scott Byers
If we are to escape the clutches of COVID-19 we are going to have to find a way to allow testing and tracing to catch up.

Massive testing followed by the tracing and isolation of the infected are universally regarded as the most effective weapons in the human struggle against the coronavirus pandemic.

Well, not quite universally. President Donald Trump is not a fan of testing for coronavirus, believing more tests reveal more cases and more cases then subtract from his political support.

A snarky social media commentator noted that Trump could rest his prejudiced soul a bit better if he applied his screwball notion to immigration. Don’t count immigrants and they won’t be here, by Trump’s logic.

The leaders of Texas cities and counties early on launched their own testing and tracing programs. They might have succeeded had Gov. Greg Abbott not opened the state too early. Now the disease has outrun the tracers. They simply can’t move as fast as the virus is moving and infecting us.

You know what moves more slowly even than the testing and tracing? Reliable and consistent information about the virus. Coronavirus is a novel virus. Researchers need time to understand it. Powerful treatments and, possibly, vaccines will follow, but they take time.

Still, much of the confusion has been caused by divided political leadership. Let’s not revisit all of those differences, but just note that local leaders said one thing, Abbott said another, Trump yet something else. Scientists and medical experts struggled to be heard.

Some took Trump’s dismissive attitude to the virus and the absence of a uniform response from other political leaders as an indication that there was little to worry about.

Complicating the situation further, some believed that stay-at-home and other social distancing measures and orders to wear masks in public were attacks on individual freedom. To them, “tracing” sounded like Big Brother.

Masks are for sissies, some believed, missing the point that mask wearing protects others more than it protects those wearing the masks. Let’s stress, “others,” like one’s children, or spouses, or parents and grandchildren, or colleagues or neighbors.

Anyway, if we are to escape the clutches of COVID-19 we are going to have to find a way to allow testing and tracing to catch up. Ideally, we would all cooperate and understand that we — each of us — risk killing others when we stubbornly refuse.

Despite all the noise and contradictory messages, it’s really pretty simple. Stay away from others outside your own household as much as you can. That slows down the virus so the testers and tracers can catch up to it. Infected folks can be isolated so as not to spread the disease further.

This will take nothing but human patience, discipline and good old fashioned American concern for one another. Houstonians, do you recall how many of you risked your lives to help victims of Hurricane Harvey? Now, you can help others by actually lowering risk to your life! It’s easier.

Also, remember to test and trace the effectiveness of political leaders during this crisis. There’s an election around the corner.

Why is John Cornyn afraid to debate MJ Hegar?
6 days ago

We the People (of Texas): 100 years after the 19th amendment, Texas women of color are harnessing their political power
1 week ago

Progressive women in Texas are changing the game
1 week ago

It’s going to take all of us: Swing voters alone will not save democracy