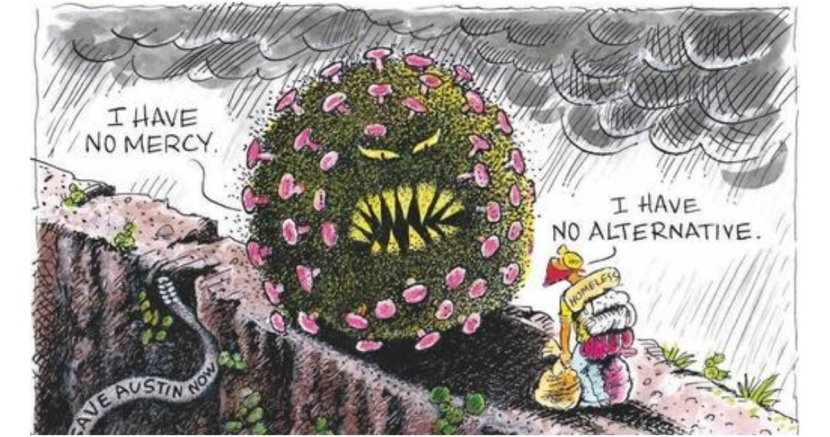 What does “shelter in place” mean for those without shelter?

Illustration by M. Scott Byers
A progressive city like Austin cannot deny shelter to those who need it and then blame them for our failure to find them shelter.

In 2019, the Austin City Council repealed its ban on homeless camping and panhandling after reviewing federal court orders that found such bans unconstitutional.

The move was controversial, and it wasn’t long before the Travis County Republican Party backed an effort to restore the ban. Given the clever name “Save Austin Now,” the action seemed at the time little more than a public relations stunt.

Still, many were alarmed by the emergence of Austin’s homeless from their less conspicuous camps in overgrown green spaces and hidden grottoes.

“Save Austin Now” presented some 24,000 signatures on a petition to place an item on the Nov. 3 ballot that would restore Austin’s anti-camping ordinance. City staff recently rejected enough of those signatures to invalidate the petition, placing the issue in limbo as the anti-homeless group threatens legal action.

The coronavirus pandemic complicated the issue, to say the least. Austin and Travis County officials asked residents to shelter in place as the pandemic raged. What could that mean for homeless people, who faced angry demands from some that they not shelter in the places where they put their tents and camps after Austin’s ban was lifted?

Ending homelessness, especially among veterans and the young but ideally for all, has been the city’s goal. It is a worthy goal shared by the City Council, city staff and the people they represent. It’s a goal that reflects Austin’s progressive heart.

The council budgeted $62.7 million for homeless services in 2019-20, a 17 percent increase over the previous year. The 2020-21 budget proposal includes $60.9 million. Still, progress is slow. The city purchased the Rodeway Inn on Interstate 35 in November, intending to renovate it and use it as a facility for the homeless. That — and other concrete plans — have not yet been completed.

One thought behind Austin’s lifting of the camping ban was the recognition that rules prohibiting services to homeless folks who were ticketed for camping were counterproductive. It’s like a tragic twist in a story by (one-time Austin resident) O Henry. Efforts to provide shelter to the unsheltered were undone by criminalizing — and perpetuating — homelessness.

Heartlessly re-criminalizing homelessness as “Save Austin Now” wants to do is not the answer. It would punish the homeless for our collective failure to do more to end their nightmare. A progressive city like Austin cannot deny shelter to those who need it and then blame them for our failure to find them shelter.

Certainly, the city should have first engaged in a substantive conversation with the public about all that was being done to help people out of homelessness before lifting the camping ban. That might have reduced the anger and alarm.

Now, city staff should learn a lesson from the valiant efforts of workers and volunteers with Caritas, Casa Marianella, Mary House, the Religious Coalition to Assist the Homeless and so many others providing shelter and services to homeless people.

Those workers understand the urgency of their mission and waste little time doing what they can. The city of Austin should do the same. It needs to act with greater haste on its progressive ideas for ending homelessness.

Redistricting Update: What do the new gerrymandered Texas maps look like?
1 day ago

PODCAST: Redistricting and the 3rd Special Session
3 days ago