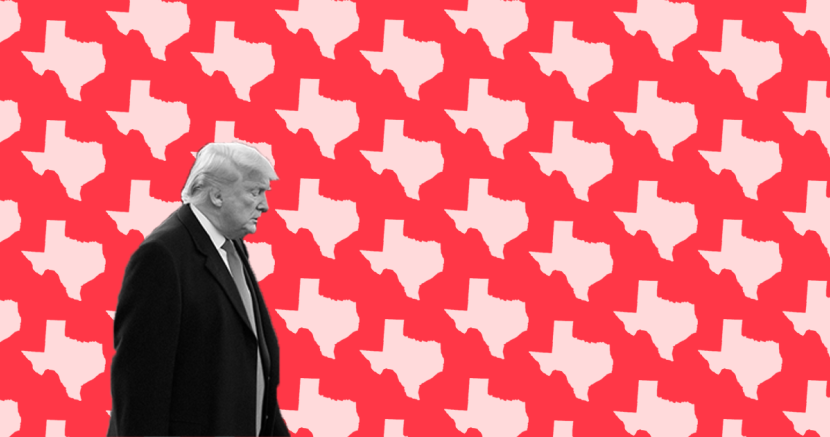 Wesley Story
Trump knows Texas is critical to a win in 2020, and he’s terrified because he knows Texans are fed up with his corruption and hate.

Trump is visiting Texas for the seventh time this year today, more than doubling his 2017 and 2018 visit numbers and further proving that the state is crucial to his 2020 campaign.

If you find yourself wondering why Trump has all of a sudden taken an interest in Texas, you need only look to Texas’ recent election results and voter turnout in our state. Progressive power in Texas is growing, and Republicans are scared.

Texas is the biggest battleground state in 2020.

That fact is, Trump and Texas Republicans know Texas is a battleground state. That’s why he’s visited seven times this year alone.

In 2018, Texas voters affirmed that progressive values are mainstream values, and voters will do so again in the 2020 election.

While this is Trump’s first visit to Austin during his time in office, he’s been visiting different cities throughout the state all year.

Trump is using Texas as his personal bank, but he’s proven time and time again that he does not care about the people in our state.

When hurricane Harvey caused catastrophic flooding, Trump insulted residents by suggesting people went out on their boats just to watch and needed to be rescued. Texas has the highest rate of uninsured people in Texas, yet Trump continues to attack the Affordable Care Act. Our communities have dealt with numerous deaths from mass shootings, yet Trump does nothing to help end the gun violence epidemic across the nation.

Trump knows Texas is critical to a win in 2020, and he’s terrified because he knows Texans are fed up with his corruption and hate.

Texans are not interested in Trump’s failed policies and broken promises. We’re ready to elect lawmakers who will fight for us. And that’s why in 2020, Texans will support progressive candidates with the courage to fight for real change.

Trump should reevaluate his priorities.

As the impeachment inquiry moves forward, witness testimony continues to confirm what’s been known all along: Trump bribed a foreign government by withholding aid in exchange for an investigation into one of his political opponents.

Polls show support for impeachment and the inquiry continues to increase.

A national poll released earlier this week shows that 70% of Americans believe Trump's Ukraine actions were wrong. In addition to that, a Texas poll shows a plurality of Texans support the impeachment inquiry.

While Texans are split on whether Trump should be impeached, we suspect these numbers will only get worse as the investigation reveals more truths about Trump’s corrupt dealings.

On Wednesday, Ambassador Gordon Sondland testified bluntly that there was a ‘quid pro quo’ involving Ukraine. Sondland also said that he and senior administration officials “followed the president’s orders” by coordinating with Trump’s personal attorney to pressure Ukraine to launch investigations.

Instead of visiting Texas, maybe Trump should be figuring out how he plans to pull off an orange jumpsuit with orange skin.