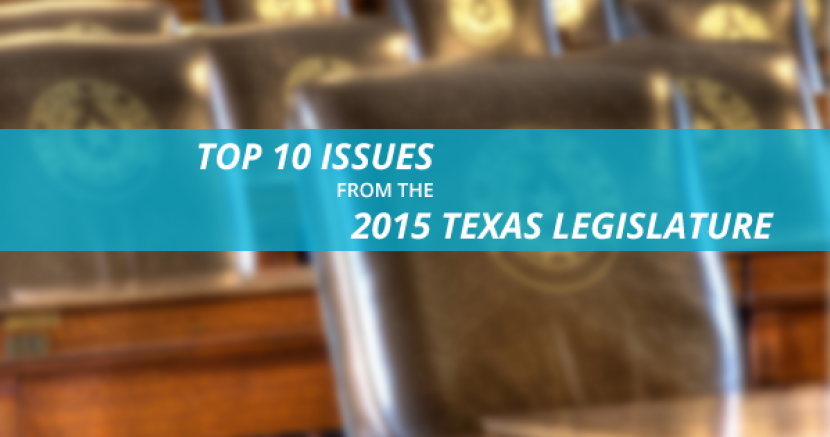 Top 10 Issues From the 2015 Texas Legislature

Now that the dust has settled and the 2015 Texas Legislative session is over, we've made a list of the 10 biggest issues under the pink dome. Be sure to share this list with your family and friends!

1. LGBT EQUALITY: Good news! Thanks to the hard work of Democrats and LGBT advocates, most of the more than 20 anti-LGBTQ bills introduced by Republicans were defeated, save for two totally inconsequential measures. Click here to read all about it.

2. MARIJUANA: More good news - Progress Texas and other groups worked for more than a year to build a thoughtful campaign around marijuana policy reform. Both Democrats and Republicans joined to propose 12 bills, and ultimately Texas' first limited medical marijuana bill was signed into law. We have a long way to go, but Texas made important strides this year. Read our full wrap-up here.

3. MILITARY FAMILIES: Saved from the budget knife is something known as the "Hazelwood exemption," an important program that provides college financial aid to veterans and their dependents. But an impassioned speech by Democrat Joe Farias helped build bipartisan support in favor of keeping the program. Read more about it here.

4. TEA PARTY: Offending ethnic minorities and getting kicked out of committee meetings are all in a day's work - even the Republicans are getting sick of these guys. Back in 2003 the Republicans were all in favor of mid-decade redistricting - bet ya they'd do it again now if they could get away with it. Read more here.

5. BUDGET AND TAXES: The legislature had an opportunity to fund schools, expand access to affordable care, fund full-day Pre-K, and provide much needed transportation infrastructure (how is the traffic in YOUR neighborhood?). Sure there was a tiny tax cut that many people may not notice, but a lot of people won't feel it. In the meantime, Republicans have left $18 billion in tax dollars in the bank, sitting there, doing nothing. Why pay it if they won't use it? Click here to read more.

6. HEALTHCARE: ...went nowhere. But it wasn’t for a lack of trying, as Democratic lawmakers championed Medicaid expansion via legislation all session long. But in the end Republicans refused every proposal - even the ones they said were most necessary. Click here to read more.

7. ABORTION: Mostly bad, but a little good here. Good news is that dozens of anti-abortion bills were defeated. But the bad news is Republicans still passed laws such as one that would give abusive or absentee parents final say in teen abortions, and another that blocks Planned Parenthood patients from accessing cancer screenings. Click here to read our full summary.

8. PUBLIC SCHOOLS: Still reeling from $5 billion in cuts back in 2011, the legislature once again failed to fully fund schools back to pre-recession levels. All while leaving $18 billion in the bank. At least no voucher plans passed. Read more here.

10. GUNS: There's nothing good about politicians going against the overwhelming will of the people and forcing a law that enables open carry. And if that wasn't far enough, they also forced an even more unpopular law to allow guns on college campuses. They tried but barely missed passing a law preventing cops from asking to see gun licenses. Read more here.