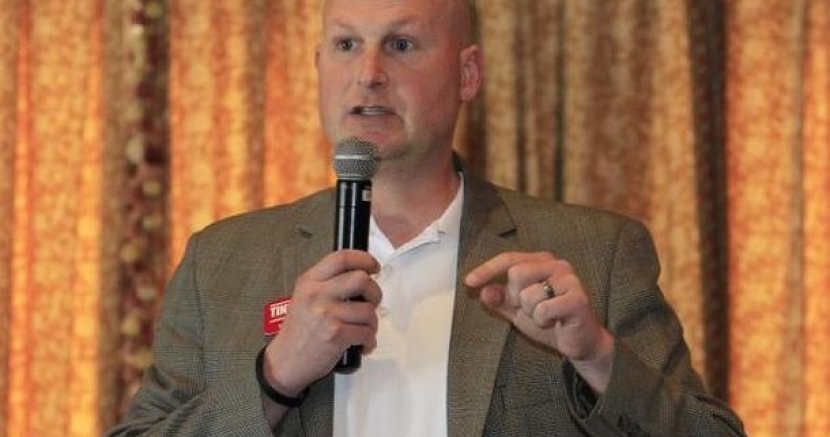 Imagine if we elected Rush Limbaugh to the Texas Legislature. That's what it will be like if Tony Tinderholt wins his Texas House race.

Tea Party candidate Tony Tinderholt is in an upsettingly close race in Fort Worth's House District 94. His antics and actions are so outlandish it's hard to believe he's not a cartoon, satirizing the Tea Party as part of some clever Colbert Report-style gag.

Unfortunately, Tinderholt is real. And he's in no way qualified to hold public office in Texas.

Let's start with research from the Lone Star Project:

Tinderholt has a history of personal and financial irresponsibility that includes four wives and five marriages, exposing children to drug-abusing day care providers, allowing a minor to drink and drive and lying about his employment status and history.

Don't worry folks, we're just getting warmed up. From the Texas Observer, in a "this can't be real" breakdown of remarks Tinderholt said on video, while talking about border security:

He’s coming to Austin, he tells the crowd, and he’ll use his seat in the hallowed chamber of the Texas House to beat back against the scum and the RINOs and the traitors. “I don’t care who watches this video and I don’t care who’s watching me and listening,” he says. “I’ll tell you this: If you get in my way of trying to stop people from trying to come across the border, I’m rolling over the top of you, period.”

Then there's this, from Burnt Orange Report:

In the latest financial reports released this week, Tinderholt’s campaign finances show that close to $15,000 in loans were inexplicably lost by his campaign.

And finally, from our own Tarrant County voter guide:

Tinderholt has said he would not allow for any additional investment in education, and would not vote to restore school funding cuts. He’s fervently anti-choice, and has said he will do everything in his power to make sure Texans do not receive the healthcare that most of the nation now does.

There are some candidates we don't agree with. There are some who are unfit or unqualified for office. And then there's Tony Tinderholt, a man so uniquely terrible that he may just be the worst Tea Party candidate running for office in Texas.