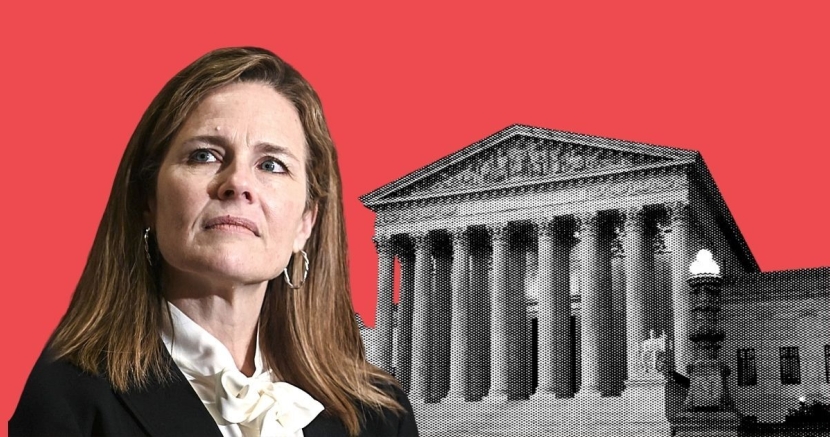 Progress Texas
Barrett’s track record is clear. Instead of fighting to open doors like RBG, she’d work to close them.

With the recent loss of Justice Ruth Bader Ginsburg, an election less than a month away, and the rampant COVID cases connected to Amy Coney Barrett’s nomination, it’s hard to believe that Senate Republicans are still pushing for Barrett’s confirmation to take place next week.

The Supreme Court has already started its October term, the first since Ginsburg’s death, and as Barrett’s nomination approaches, it’s time to look at how she may rule on the bench and how her jurisprudence could create irreparable harm to progressive causes and the communities most impacted by them. Especially, when her confirmation would likely mean a conservative majority on the Court for another lifetime.

Abortion rights are at stake.

Without Ginsburg, Trump’s promise to only appoint justices who would overturn Roe v. Wade has left everyone with the question – does Barrett fit that description?

Barrett made it clear during her confirmation hearings for her Seventh Circuit Court of Appeals confirmation that she would not publicly state how she would rule on Roe as the issue may come before her in court someday.

Even without overturning Roe, strict regulations on abortion already make accessing abortion extremely difficult for many women in Texas, particularly those from low-income backgrounds and rural areas. This method of essentially gutting out Roe has been a popular and successful conservative legal tactic, especially for the Texas GOP. If Barrett were to embrace this tactic as a justice, it would effectively make the right to an abortion empty.

After giving the 2016 speech, Barrett joined the Seventh Circuit Court of Appeals as a judge. In her tenure as a judge, she dissented in an abortion case in which an Indiana law banning abortion on the basis of fetal disability or gender. She also dissented in another case, where the Seventh Circuit struck down an Indiana law that required a minor seeking an abortion to notify their parents.

It’s also worth noting that in 2006, Barrett signed in support of repealing Roe v. Wade in a newspaper ad. Signed by Barrett and her husband while she was a law professor at Notre Dame, the ad describes Roe as “a barbaric legacy.” The ad was sponsored by St. Joseph County Right to Life and also advocated for the criminalization of discarding unused or frozen embryos that were made during the vitro fertilization process (IVF). Barrett failed to disclose her participation in the ad in her Senate Judiciary Questionnaire for both her SCOTUS nomination and her 2017 federal court nomination. Despite Trump’s insistence that Roe isn’t on the ballot, these findings make it clear that those fearful of losing their reproductive rights have substantial reasons.

While Barrett’s own personal and religious views on abortion don’t necessarily determine how she would rule on the bench, her public comments and anti-abortion jurisprudence are fair game. If Barrett were confirmed, it would create a conservative block on the Supreme Court with the power to overturn Roe. It’s hard to imagine that conservatives would pass up that chance when overturning Roe has been top priority ever since the Court’s decision in 1973.

In the midst of a global pandemic, millions of Americans losing the Affordable Care Act would be disastrous and deadly. And for a state like Texas, which has the highest uninsured rate in the country, it would cause irreparable harm. But knowing all that, our Republican lawmakers are still in court suing to have the ACA repealed.

The Supreme Court is slated to hear arguments on an ACA case being led by Texas Republicans immediately after this year’s presidential election on Nov. 10. Barrett has criticized Chief John Roberts in the past for saving the ACA. Roberts famously upheld the individual mandate portion of ACA in 2012 by stating it fell under Congress’ power to tax.

In a 2017 Notre Dame Law School paper, Barrett famously said ACA should be called “SCOTUScare”. In the same paper, Barrett said in saving the ACA, Roberts “pushed the Affordable Care Act beyond its plausible meaning to save the statute.”

With Roberts being the saving vote in 2012 and Barrett’s past comments, it’s possible that a Barrett appointment would mean the elimination of the ACA and a loss of health care coverage for millions of Americans.

LGBTQIA+ progress could be reversed.

With recent opinions by Justice Alito and Justice Thomas suggesting that they would overturn Obergefell v. Hodges, the landmark case which guaranteed marriage equality, it’s worrisome to think about how the Supreme Court court may rule on future cases concerning LGBTQIA+ issues. It’s especially worrisome when Barrett has already publicly defended the dissenters of Obergefell, who believed marriage equality should have been decided by the states. We know here in Texas that if that were the case, hardly any protections would exist for queer Texans. Texas currently has no statewide law protecting LGBTQIA+ Texans from discrimination, and before the marriage equality ruling, the state did not allow for same-sex couples to get married.

In the same 2016 lecture, Barrett also misgendered transgender women when she referred to them as “physiological males” in female bathrooms. This June, the Court extended Title VII employment discrimination protections to gay and transgender people, but did so with Ginsburg’s support. The Court has more recently been a place of progressive victory for LGBTQIA+ issues, and a Barrett appointment could mean the loss of that progress and a more hostile Texas for queer folks.

“Fight for the things that you care about.”

During the now-infamous Barrett nomination White House event, many drew comparisons between Barrett and Ginsburg. The White House even went so far as to create “Notorious ACB” shirts. But Ginsburg and Barrett are not interchangeable.

Barrett may be an accomplished legal scholar, but that does not negate the harm her jurisprudence would have. Barrett’s track record is clear. She will not fight for progressive policies when she is on the bench.

Ginsburg once famously said, “Fight for the things that you care about. But do it in a way that will lead others to join you.” The people who join Barrett’s fight are not looking to open doors. They are working to close them.