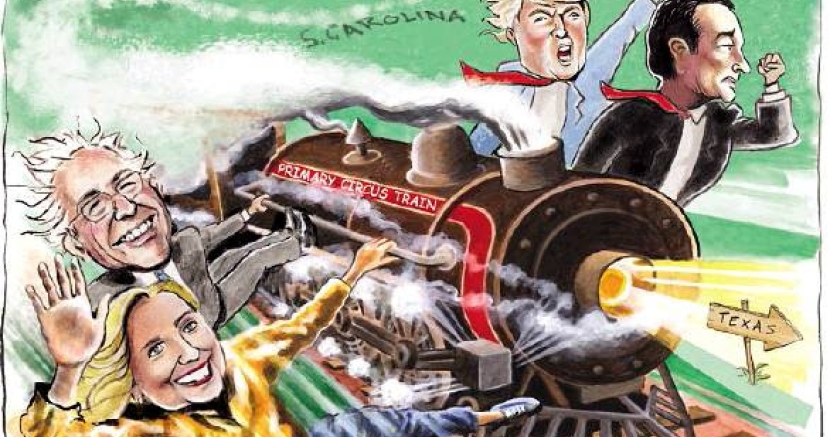 The nation is in the middle of some presidential primary elections. And brace yourselves because the circus trains are coming to Texas.

The trains stops in Nevada and South Carolina before pulling into Texas on March 1. That’s Super Tuesday, and 14 states — plus American Samoa — will hold primaries or caucuses that day. Texas is by far the largest. Democrats will award more than 250 delegates. One hundred and fifty-five delegates are there for the picking by GOP candidates.

The name-calling, race-baiting, flip-flopping, resume-padding and character-destroying antics of this campaign have many wondering if it’s any way to run a railroad. Or a circus. Or, certainly, a democracy.

And now, in the middle of all this, Republican presidential candidates and their colleagues in the U.S. Senate are threatening to shut down the U.S. Supreme Court in the aftermath of the death of Justice Antonin Scalia. Government shutdowns have worked so well for them in the past.

So much for the U.S. Constitution, which requires the president to appoint a replacement to be confirmed on the advice and consent of the Senate. But Barack Obama is president and the GOP doesn’t want to let him appoint Scalia’s replacement. Unless Scalia is replaced, the likely 4-4 ties among the other justices on key issues effectively close the court until a new judge is seated.

Scalia’s death is already having profound effects on the presidential primaries. Clinton and Sanders will certainly agree that the Senate should not effectively mini-impeach a president by denying any action on a court appointment before one is even named. But the issue plays more to Clinton’s benefit.

The current court is now deadlocked at four conservatives and four liberals. The issues already pending are of staggering importance. The stakes are high and they are dominating the news. Voters will likely see this as a time for experience over experiment. On the Democratic side, that helps Clinton.

Here in Texas, Clinton already enjoys a significant advantage. She and former President Bill Clinton have long been popular with Texas Democrats. In 2008, Hillary Clinton demonstrated that support by beating Barack Obama in the Texas primary.

However, Bernie Sanders has run a remarkable campaign. He and his supporters deserve deep respect for their campaign savvy and commitment. Should Hillary stumble badly in Nevada or South Carolina, her assumed support in Texas could decline and the Sanders campaign could use the momentum to turn the tide here.

The level of mudslinging among passionate Democrats favoring one or the other candidate is unfortunate. How could any Democrat watch the dangerous extremism of the GOP presidential candidates and imagine either Clinton or Sanders as the enemy?

Ted Cruz has the advantage in Texas. It’s odd to write that given the Bush family’s long history here. Nonetheless, it’s Cruz who has captured the extreme right-wing voters who now dominate the Republican primary.

It used to be said that all politics is local. True enough some time ago, before the relative decline in the amount if not the quality of state political coverage and the rise of 24-hour cable news. In a sense, all politics is now national or global.

Profound regional differences remain, of course. It is sometimes surprising to note how little those regional differences change, in spite of national migration patterns and demographic shifts. Still, it’s worth asking if we’re not already engaged in something like a national primary, no matter how staggered the voting is on the calendar.

The trouble with the current sequencing of primaries is that the outcomes in the early ones deeply influence future outcomes. And if the local or regional character is already washed out a little by the power of national over local reporting, will the outcomes here truly reflect our character and preferences? Let’s hope so, because Texas could play a bigger role in the outcome of both primaries than ever before.

This was article originally published in the Austin American Statesman. Glenn W. Smith is Director of the Progress Texas Pac.