Texas Republicans want to erase indigenous history in our schools 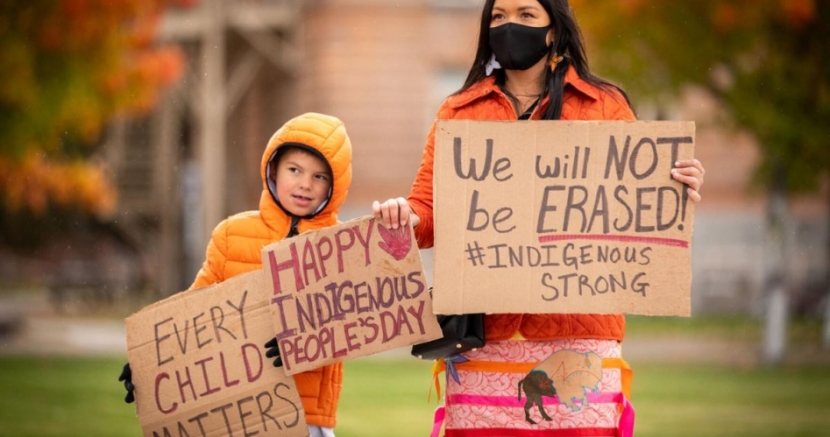 Arabella Cadena
November is Indigenous History Month. We break down how Texas Republicans are erasing indigenous history from schools.

On October 8, 2021, President Joe Biden officially recognized Indigenous Peoples’ Day as a national holiday. It only took around 530 years of hailing Christopher Columbus as the ‘discoverer’ of the New World for the United States to acknowledge its racist and colonialist past. And if sudden changes aren’t for you, don’t worry, you can still find Columbus Day marked on calendars right above Indigenous Peoples’ Day and hear the myths of America by asking a Texan what they learned in public school. Ahead of Thanksgiving, America’s favorite mythological origin story, here’s how Texas politicians have sought to erase essential indigenous history from our schools.

Elementary school parades decked out in their mascot’s feather headdress. Thanksgiving reenactments of generous Native Americans and grateful pilgrims. A two-second mention of the Trail of Tears. Read aloud sessions of novels written by white men filled with harmful words and stereotypes. This is often the extent of indigenous history that kids are taught in Texas schools. Our state has a history of censoring school curriculum and textbooks in favor of a revisionist American narrative, one that doesn’t just gloss over but outright removes any negative aspects of our state’s history. According to a 2015 study, indigenous peoples were only represented in 4% of Texas history standards.

Southlake, Texas has been at the forefront of the fight regarding how to competently teach race and racism in schools. When the school board tried to implement a culturally competent action plan in response to an abundance of racist events at schools it received a strong, organized backlash from parents.

In Texas, “Protect the Tradition” goes all the way to the Governor’s Mansion. During the 87th Regular Session, HB 3979 passed and went into effect on September 1st, 2021. The bill seeks to ban “critical race theory” from being taught in schools despite the fact that teachers and experts agree that critical race theory is not taught in K-12 schools. This bill is a thinly concealed attempt by Governor Abbot to whitewash history.

Laws like this stop children from developing critical thinking skills in favor of advancing a conservative political agenda. HB 3979 includes a long list of subjects and ideas that must and must not be taught. And while Native American history is included (after being added by Democratic legislators), now teachers can’t be “compelled to discuss a particular current event or widely debated and currently controversial issue of public policy or social affairs,” or to give “deference to any one perspective”.

Let’s be honest, most students were already receiving education on indigenous peoples that privileged “opposing views”. Students learn carefully curated myths that depict indigenous peoples as homogenous, groups of a past struggle. Karankawa, Caddos, Jumanos, Comanche, Apache. These are only a few of the diverse tribal nations from Texas. The Alabama-Coushatta, Tigua, and Kickapoo are the only three federally recognized tribes that still have reservations in Texas.

Indigenous people in Texas are still fighting today to be recognized and if Texas doesn’t put back the missing pages in their textbooks then the struggle will never end. Children deserve an honest and accurate education that enables them to learn from the mistakes of our past to help create a better future.

The consequences of this bill are already being seen, not surprisingly in Southlake, Texas where teachers were told to include opposing views on the Holocaust. Additionally, Republican State Representative Matt Krause has launched an investigation into Texas school districts over a 16-page list of books he claims can make certain ‘students feel discomfort’. The list includes An Indigenous Peoples' History of the United States for Young People and Love Beyond Body, Space, and Time: An Indigenous LGBT Sci-Fi Anthology, important books with indigenous authors and contributors.

In Texas, where indigenous history is already neglected, this bill opens the doorway for state-sanctioned erasure of Texas’ indigenous peoples. Now, teachers must not teach that “slavery and racism are anything other than deviations from, betrayals of, or failures to live up to, the authentic founding principles of the United States”. The atrocities of colonization and forced resettlement are not mere deviations, they are what American and Texan identities are founded upon. There is no denying this truth, but now lies are the law and educators must tiptoe their way through teaching vital histories of indigenous peoples.

November is Native American Heritage Month. Now, is the time to engage critically and intentionally with the history of indigenous people that you’ve been taught. Take the time to support and learn about indigenous people. Visit Not Even Past, a digital history magazine from the University of Texas at Austin with comprehensive resources on Texas history, including a fifth-grade social studies curriculum based on primary resources rather than politicized textbooks. Don’t let a day of pumpkin pie and turkey be the only thought you give to Native Americans this year.