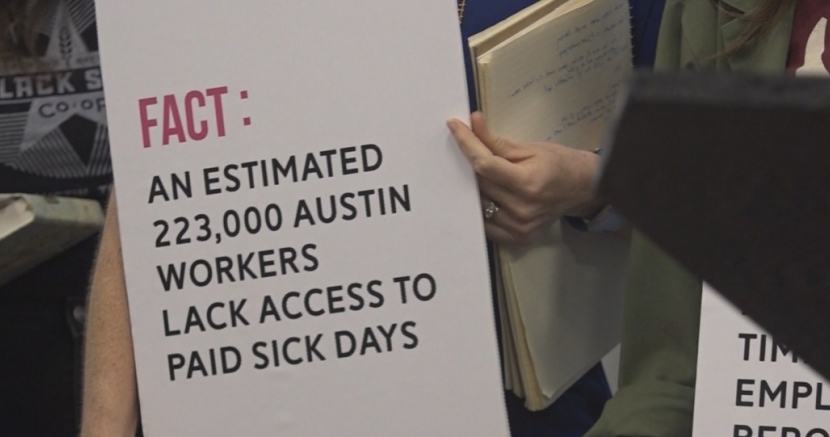 Austin's paid sick days law is already under attack. And the opposition is showing just how out of touch they are with the struggles faced by everyday working Texans.

State Rep. Paul Workman, R-Austin, spoke out against the bill immediately after it passed, claiming the ordinance is “declaring war” on small private businesses and blaming the “liberal city council.”

Currently, one in three Austin workers - and 40 percent of Texas workers - can’t earn even a single paid sick day to care for themselves or a loved one. After Austin families overwhelmingly testified in support of the bill, the council voted 9-2 to implement the policy.

Even with this overwhelming support, Republicans in the Texas legislature are working to reverse the bill.

“I will make good on my promise to file legislation on the first day possible to reverse this and the other liberal Austin policies that they’ve enacted,” Workman said in an interview with KVUE.

The opposition is attacking the bill the same way they attacked minimum wage increases, by saying mandatory paid sick leave will put Austin out of business. Overwhelming evidence, however, says that is not true.

In their efforts to reverse all “liberal Austin policies” simply because they were backed by a different party, Republicans are attacking working families who need the flexibility paid sick days provide.

According to the Center for Public Policy Priorities, approximately 37 percent of the total Austin workforce is at risk of losing wages or being fired if they follow doctor’s orders when they or a family member is ill. And for a low-income American worker without paid sick days, three days of lost pay is equivalent to an entire monthly grocery budget.

The truth is, paid sick days benefit everybody. They’re not just good for families, but for public health and for the economy. Cities that have already mandated paid sick days serve as proof. The vast majority of employers that have been surveyed in places with paid sick days are supportive of the policy after its been implemented.

Austin is ahead of the southern curve. Paid sick days should be standard practice in every city in our state. Opposition from any lawmaker is a deeper representation of how out of touch they are with the struggles faced by everyday working Texans.

Austin’s paid leave is safe for now, but by the looks of it, this fight is far from over. Workman won’t be able to do much until the start of the 2019 legislative session, but he claims he has enough support from members of the House and Senate to pass legislation that overrides the ordinance.

From what we’ve seen fighting to get the bill passed, we know Austin residents are passionate about paid sick days. It’s going to take more than party politics and opposition rooted in flawed logic to reverse a policy so many Austinites worked to implement.

The State has won an appeal to defund Planned Parenthood from Medicaid, here’s what it means for Texans
2 days ago