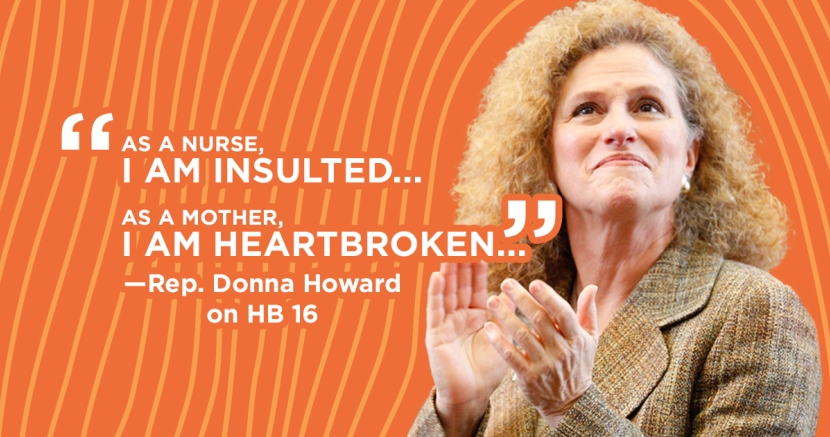 Tara Pohlmeyer
Two bills in the Texas Legislature Legislature, HB 16 and its companion SB 23, attempt to limit abortion rights based on a series of outright lies.

Extremist conservative lawmakers at the Texas Legislature have filed many restrictions on Texans, working to divide voters and speak to their dwindling  “bases”.

The most recent bad bill to pass in the House is Rep. Jeff Leach’s HB 16, the companion bill to Sen. Lois Kolkhorst’s SB 23. This bill would impose civil fines on abortion providers if they don’t care for a baby that is “born alive” during an abortion procedure.

But that simply doesn’t happen.

Rep. Donna Howard gave a passionate response to the bill on Tuesday evening.

“The aim of HB 16 is clear – further stigmatize abortion, misinform the public, intimidate physicians, and interfere with a woman’s ability to seek medical care,” she said. “To debate this bill or to try to amend it would legitimize its false narrative. As a nurse, I’m insulted… as a mother and a grandmother, I am heartbroken for those families who will suffer as a result of this punitive bill.”

The bill passed the House 94-2, with 49 members joining Howard in abstaining from voting for or against it.

Republican Rep. Sarah Davis (Houston) also declined to vote for or against the bill.

Immediately after the vote, advocates with the Trust Respect Access Coalition dropped a banner that read, “Stop Turning Lies into Laws,” before they were escorted out of the Capitol.

Bills like #HB16 use violent and inflammatory language to capture attention, but it’s all a big lie.

Bills like HB 16 seek to solve a nonexistent problem and are simply meant to advance a national false narrative that targets and demonizes abortion providers.

Now that HB 16 has passed the House, Rep. Leach and his cronies are simply trying to push their own talking points instead of real problems facing everyday Texans.

Many of these Republicans won their last elections by slim majorities. They know progressives are building power, and they’re working to identify themselves as lawmakers “for the right.” The latest anti-abortion bills proposed in Texas play off of the national GOP and Donald Trump's current obsession over the nonexistent plagues of "late-term abortions" and "infanticide."

Democrats at the Texas Legislature need to hold the line and prevent blatant lies from being heard on the House and Senate floors.

Texas has some of the most restrictive abortion laws in the country. We need progressives to fight to respect Texans’ decisions and guarantee abortion access for all.

The bill now goes to the Senate, where Texans have another opportunity to speak against the bill.

Sign up now to tell lawmakers to vote NO on harmful abortion legislation.