Local advocates and students of the University of Texas (UT) chanting “We believe survivors” at a rally at UT after Brett Kavanaugh’s confirmation in 2018. Photo credit: Joshua Guenther/The Daily Texan
While legislation this year has centered survivors of sexual assault, elected officials must hold themselves accountable to these recent changes.

After nearly a decade, Texas has finally taken the long-awaited steps to redesign its criminal justice system with survivors in mind.

Survivors across the state have courageously shared their experiences by working together with advocates and politicians alike to make this historic change; a response to the unacceptable amounts of systemic discrimination when seeking justice after sexual assault crimes. Senator Kirk Watson (D-Austin) — who believes any credit for progress at the Legislature should go to survivors — told Deeds Not Words that:

“We are making progress because of the survivors and the people that are willing to speak out on this issue.”

In 2019, we saw more survivor-centered bills proposed than ever before. Among some of the proposals were:

The cost of testing kits has long been pointed out as the reason the backlog is so extensive. Testing a rape kit can cost up to $1,500 dollars, and back in 2011, it would have cost $11 million dollars to address all 20,000 untested kits in Texas at the time. A law enacted that year required law enforcement to send all kits for testing within 30 days, but as of 2017, there are still over 2,000 untested kits across the state.

According to Kate Groetzinger, a former legislative fellow with Texas Observer and a reporter for Utah’s NPR station, said delays in testing were still inevitable because there was no enforcement of this policy. Some delays were so extensive that mold and dust collected on kits and surpassed the statute of limitations; which is unacceptable when performing a rape kit is an invasive process that can re-traumatize the survivor, and when prosecution depends on timely processing.

Earlier this year, Rep. Victoria Neave (D-Dallas) filed House Bill 8 — the Lavinia Masters Act — in an attempt to end the outrageous backlog of kits. The act would enforce the timeliness required by law when processing rape kits. It’s also named after Lavinia Masters, who was raped at knifepoint at just 13 years old, and whose rape kit remained untested for more than 20 years. She told LatinoUSA that she only learned about the status of her rape kit after watching a commercial on TV “that acknowledged the Dallas Police Department had launched an initiative to clear out backlogged rape kits.”

It took another six months to identify her rapist once her kit was found, and she wasn’t able to press charges once they matched DNA to her rapist because the ten-year statute of limitations had passed. Instead, she learned that her rapist had been incarcerated multiple times since her attack for other crimes, and would remain free to attack again.

Masters told The Dallas Morning News that her experience influenced her to become an advocate for sexual assault, so no one else has to go through what she did.

At the local level

Andrea Reyes, political director of Deeds Not Words, said that change needs to happen at the local level by advocating for statewide policies to our local representatives. But in order for these policies to protect those they are intended to, officials must also take steps to ensure accountability is included.

Under the new state budget, cities are required to develop their own plans in order to better handle sexual assault crimes. This is important because in addition to the thousands of backlogged rape kits, a recent lawsuit against Travis County District Attorney Margaret Moore shockingly exposes the discrimination survivors endure. In Houston, Harris County Assistant DA John Denholm was recently fired for questioning the documentation status of someone who was sexually assaulted while experiencing incarceration, leading him to not prosecute the case.

Emily Borchardt, one of the eight plaintiffs in the lawsuit against Moore, spoke to The Austin Chronicle last month about her experience with the justice system in Travis County. Borchardt was violently raped and kidnapped over the course of several days, and despite her attacker's DNA matching what was found in her rape kit, Moore refused to prosecute her case.

Moore has gone on the record before to say that according to the Texas Penal Code, sexual assault can be difficult to prosecute beyond a reasonable doubt. Unfortunately, many sexual assault crimes in Texas are not considered serious offenses.

The Texas Association Against Sexual Assault shared that “nonconsensual sexual contact against an adult that does not involve penetration or physical injury” is only considered a class C misdemeanor; the equivalent of a traffic ticket.

And while Moore has also said that it’s not enough that someone says “no” during a sexual assault — that the DA’s office would have to prove that that “no” was overcome by force — First Assistant Mindy Montford outright lied when she “claimed Borchardt admitted her alleged rapes were consensual and that she was ‘relieved’ prosecution was declined.” So why wasn’t Borchardt, and so many other survivors, given the opportunity for justice like she deserved?

According to Reyes, one of the things Deeds will advocate for during the next legislative session is the ban on nonconsensual and medically unnecessary pelvic exams that are imposed upon students — by other students — not only in Texas, but the other 41 states that allow it.

“We’ll also continue to fight for things that didn’t pass — but that still affect many —  like protecting those who experience sexual harassment in the workplace."

“We’ve already seen at The University of Texas that even though the nine Title IX state bills passed, there actually hasn’t been any accountability,” Reyes said. Instead, students at UT recently made headlines as they took matters into their own hands; protesting professors who have violated sexual misconduct policies with no consequences from the school; even being allowed to resume teaching.

Earlier this year, survivors and advocates gathered at the Capitol to share their experiences with lawmakers, and to talk about what these survivor-centered bills could mean for many. 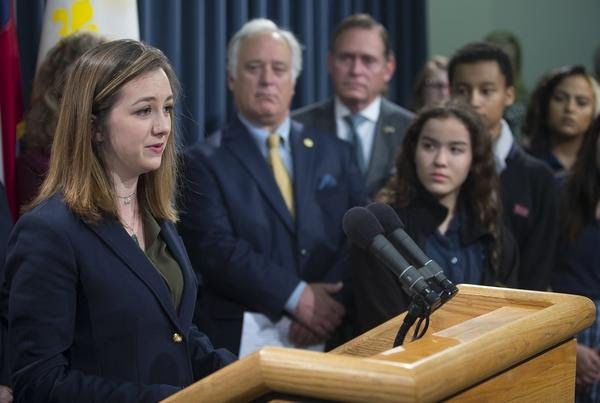 But if we want these bills to have a tangible impact on those it’s intended to protect, we must elect officials at all levels of government who will not only center survivor justice but also recognize the spectrum of experiences that constitute sexual assault.

We must elect those who believe survivors when they listen to their stories.

We must elect those who will hold themselves accountable.

Major brands send a message: Voter suppression is bad for business
1 week ago