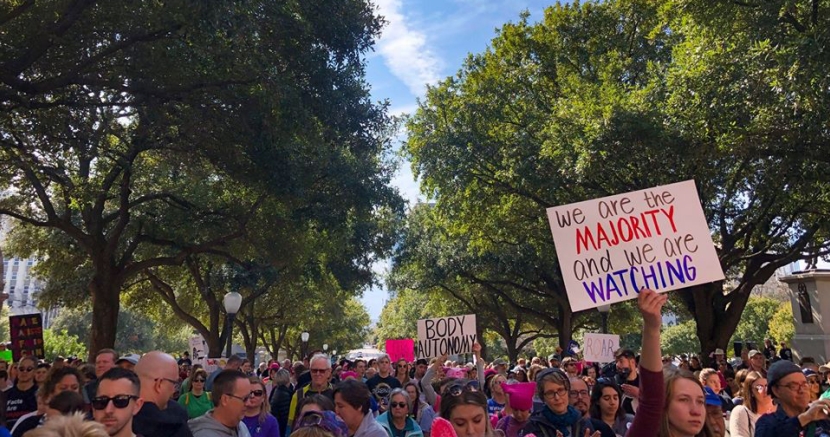 Paige Alexandria
Abortion is legal in all 50 states, but some cities in Texas have passed unconstitutional ordinances in an attempt to stigmatize abortion and confuse the people who need them.

On behalf of The Lilith Fund for Reproductive Equity and Texas Equal Access Fund (TEA Fund),  the national ACLU and the ACLU of Texas filed a lawsuit on February 25 against the cities.

“We’re seeking a declaration from a judge that these ordinances are unconstitutional. We’re also hoping that a declaratory judgment will help to reinforce the important education our plaintiffs do about what people’s rights actually are,” said Anjali Salvador, staff attorney for the ACLU of Texas.

According to Salvador, a declaratory judgment in Lilith and TEA Fund’s favor has the potential to impact other areas that consider similar ordinances in the future. For the abortion funds involved in the lawsuit, the ordinances not only harm the people they serve, they directly contradict the values held by the organizations.

“At TEA Fund, we really try to do what we can to shift the narrative and culture around abortion, and we think these ordinances are a way for anti-abortion extremists to stigmatize and confuse people having abortions. That’s something we’re not aligned with at all,” said Kamyon Conner, executive director of TEA Fund, an abortion fund serving the northern region of Texas.

“These ordinances try to limit our scope of work in these towns, and it could make it difficult for us to do advocacy work in areas where it’s clearly needed. At the same time, it doesn’t hinder the ability for any anti-abortion narrative to be shared which isn’t fair,” Conner said.

Cristina Parker, communications director for The Lilith Fund, said that while other cities have passed similar ordinances, the lawsuit only focuses on the ones who name the groups as criminal organizations. She said any barrier is a threat to not only the values of Lilith Fund, but the work they do as an abortion fund serving central and southern Texans.

“Naming us threatens our First Amendment rights, and one of the things we’re challenging is the ordinance being so vague,” Parker said. “When they say we can’t operate in the city, what does that even mean? If anyone questions their ability to get an abortion because of where they live — even one person — that’s harm.”

After Waskom first passed the ordinance last summer, Lilith Fund and NARAL Pro-Choice Texas developed a campaign to combat the wave of misinformation and confusion. The groups put up two billboards that read “Abortion is Freedom” and directed readers to needabortion.org — which provides contact information for local abortion providers, abortion funds, and practical support organizations, and answers to common questions people have when seeking an abortion in Texas.

“The Know Your Rights campaign was in response to the ordinances happening, as we realized their purpose is to confuse and intimidate people,” Parker said. “We asked ourselves what we could do to share facts about abortion in and provide people in those cities with reality-based information.”

For people who want to fight back against these ordinances, the ACLU of Texas — in collaboration with partners Planned Parenthood Texas Votes, The Lilith Fund, TEA Fund, NARAL Pro-Choice Texas, Texas Freedom Network, and Progress Texas — produced a toolkit to help activists engage their community in the fight for reproductive freedom. The kit offers six ways to fight extreme anti-abortion restrictions, tips for talking about abortion when meeting with council members, and examples of testimony to submit.

“We worked together to help local advocates with tools they can use to fight back. If there are people who are interested in getting involved, they should contact the [aforementioned] organizations,” Salvador said.

Conner wants people to know that if you’re afraid to become involved amidst these extreme restrictions, remember that abortion is still legal in all 50 states — including these cities.

“It may not feel [legal] where you live because of the way it’s been stigmatized in Texas, but [abortion] is normal and okay” Conner said. “There are also different ways to get involved, and we’ve been organizing people to go to city council meetings. If you live in Texas and don’t agree with them passing this ordinance, you can call your city council or write a letter.”

Parker said people in those communities are already fighting back.

“If your community is being targeted, stand up and go to your city council or reach out to us. Cities have started rejecting it because of local concerns,” Parker said.

We know the truth: Abortion is health care, and abortion access should be protected.