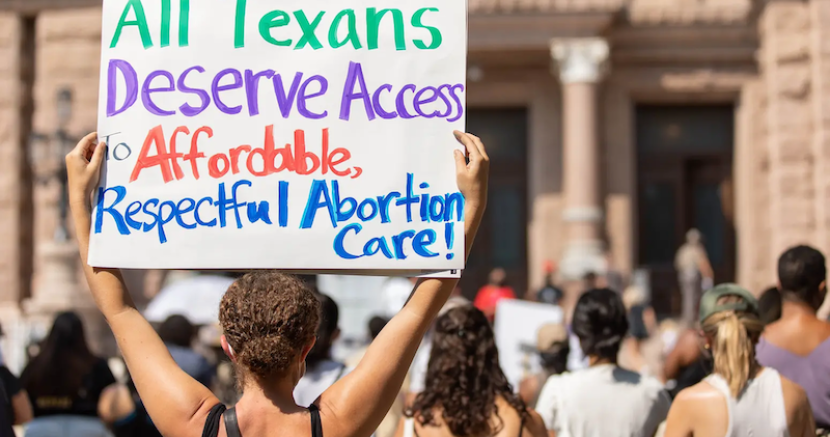 As SB 8 hits the six month mark, Texas heads into the general election.

On March 1st, while SB 8 quietly turned six months old, candidates excitedly prepared for election day. Abortions in Texas dropped almost 60% in the first month under SB 8 and Idaho’s state Senate recently voted to enact a six-week abortion ban, making it close to being the first state to pass a copycat Texas abortion ban. Abortion is a crucial, timely issue and yet it has receded from the spotlight. Texans, especially those who have been impacted the hardest by SB 8, deserve candidates who will take a bold, progressive stance on abortion heading into the general election.

After living in a post-Roe reality for half a year now progressive Texas candidates know that abortion rights are of the utmost importance. Right? In case they need a refresher, here are five reasons why candidates shouldn’t shy away from abortion this upcoming election.

A recent Dallas Morning News poll shows that 53% of Texans believe the landmark ruling, Roe v.  Wade, should not be overturned compared to 45% who think it should be overturned. Additionally, a poll from the Texas Politics Project found that a majority of Texans oppose automatically banning all abortions if Roe is overturned. Abortion access is an important issue to voters and candidates must take an unapologetic stance on abortion to energize voters.

Abortion is not just a “women’s issue." Rhetoric such as “a woman’s right to choose” or “women’s healthcare” excludes the trans and non-binary people who have abortions. Accessing an abortion in a gendered healthcare system is already difficult for trans and non-binary people, and upholding the gender binary when referencing abortion only reinforces the transphobia they already face. A pro-abortion campaign doesn’t just benefit folks who can get pregnant but their partners, family members, children and everyone else that cares about them. Everybody loves someone who had an abortion.

Abortion is essential healthcare and a human right. A lack of access to abortion services puts a person's physical and mental health at risk. When anti-abortion politicians carelessly support abortion bans they are denying essential healthcare to more than half the population. If candidates forget about abortion in their broader discussions on healthcare then everyone loses out.

In 2013 after HB 2 was enacted half of the abortion clinics in Texas closed down and some of them never opened their doors again, even after the Supreme Court struck down parts of the omnibus abortion law. Six months under the strictest abortion ban in the country will do lasting damage to clinic infrastructure in Texas. Clinics struggling to stay open affects the livelihoods of abortion providers and makes access to other reproductive care harder. Every day matters, abortion access is an urgent issue.

Emboldened by SB 8, states across the country have begun to enact similar six-week abortion bans or 15-week abortion bans. Idaho’s state Senate recently became the first to pass a bill that bans abortion at six weeks and includes the private-citizen enforcement clause. Oklahoma, a state that has seen an influx of Texans seeking abortions, is rapidly advancing their own Texas-style abortion ban. Florida just passed their own 15-week abortion ban. Texas was only the beginning. Now is not the time to let abortion take a backseat in elections.

Progress Texas is in the middle of a year-long pro-abortion campaign. Join the Roevolution today by sharing what abortion rights mean to you. Whether Roe falls or continues on, we will not stop fighting. Our vision for reproductive rights is bigger than Roe, and together, we want to form a resistance with Texans and abortion supporters across the country.