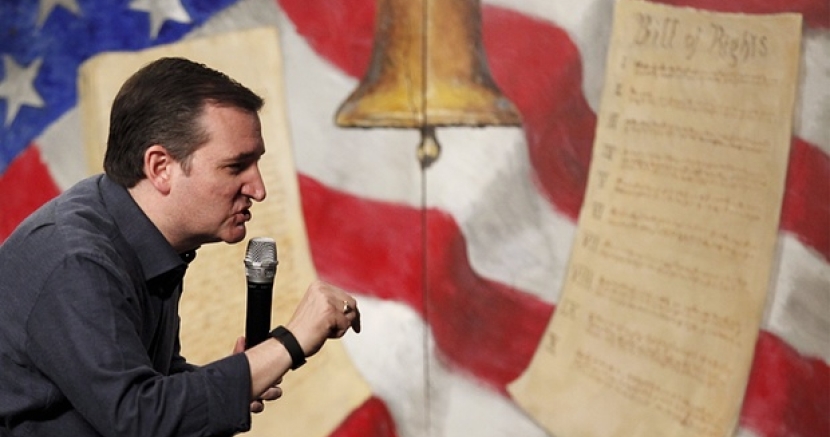 Democracy is imperiled by Cruz and company’s cavalier attacks on its institutions. It’s further evidence that democracy is not their highest value. Power is.

U.S. Senator Ted Cruz said recently that Congress should consider shrinking the size of the U.S. Supreme Court, a suggestion obviously tied to the possible election of Democrat Hillary Clinton as president and the probability of new vacancies on the nine-member court.

Cruz’s comments followed those of U.S. Senator John McCain. McCain suggested a permanent confirmation blockade of Democratic nominees. McCain is another Republican aghast that heretical American voters might be, once again, wrongly denying his Party’s divine right to the White House.

In addition, The National Review, “America’s most respected journal of white supremacy” according to Esquire’s Charles P. Pierce, has, right on time, run a pre-election piece suggesting Congress reduce the Court to six members. Call it the “Ten Little Indians Plan” with reference to the old offensive children’s rhyme or blackface minstrel song that had ten Native Americans or African-Americans disappearing one by one.

Michael Stokes Paulsen, author of the NR plan, says Congress could simply pass a law reducing the size of the Court. With such a law they could graciously bow to nature and let death or retirement do the whittling, one by one.

Should such a law be vetoed, the Senate could pass its own “advise and consent” rule banning confirmation of any new justices until only the proper number of Little Indians remains.

Cruz is correct that Congress has in the past adjusted the number of justices on the Court, a power granted it by the U.S. Constitution. For instance, just after the Civil War, Congress briefly reduced the Court to seven members (it was restored to nine members just five years later).

Racism and Reconstruction politics had something to do with it. But there was a more mundane motivation.

Then-Chief Justice Salmon Chase wanted Congress to increase his pay. His “revenue neutral” plan reduced the number of salaried justices leaving more money for him and other surviving judges. Congress, in a parsimonious fit, cut the judges but refused to increase the salaries of those remaining. President Andrew Johnson, soon to be impeached, capitulated to Congress and signed the bill.

The New Republic’s Jeet Heer writes, “Suspicion of the democratic system is so pervasive on the right because it’s driven by the fear that white Christian America is facing demographic doom.”

A new book, Against Democracy, can appear this year and gain little notice. The author argues to strip the vote from most Americans so a select few elites can run things their way. In 2016, such an extreme suggestion doesn’t even appear all that noteworthy.

Consider their attacks on voting rights with a variety of voter suppression measures: hard-to-meet ID requirements, reduced voting days, reduced polling places in minority neighborhoods and poor parts of town, restrictions on college student voting etc. Many Republicans (not all, just the extremists currently in charge of the GOP) make clear their motivations and their disdain for self-government. To them, self-government means government by them and only them. In their cult, the idea of a government by the people, all the people, is sacrilege.

But the disdain becomes even more obvious when Cruz and company say publicly that if they can’t control who sits on the Supreme Court they will reduce the number of judges so a political opponent can’t fill the currently empty seat or future vacancies.

Why, they reason, should a Democrat get to fill the late Antonin Scalia’s seat? The presumption is they are entitled to that seat and more. Voices in their heads told them so.

The very argument over the number of Supreme Court justices is already diminishing the judicial branch of government. The Constitution does not make of the judiciary a handmaiden of any particular political faction. But that’s what Cruz wants. If it won’t be his slave he’ll torture it (and the Constitution) until it bends to his absolute will.

The logical outcome of the Right’s attacks on the judiciary is a devastated judiciary and a diminished constitutional democracy. That this even needs to be said is an American embarrassment.

When Texas legislators tell you who they are, believe them
2 days ago

To keep the lights on in Texas, we need to change the power
5 days ago