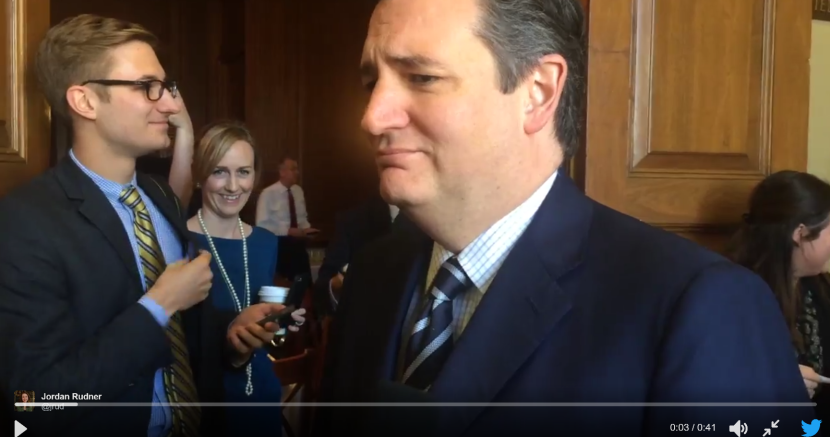 Ted Cruz Tries to Talk About Queso Like a Normal Human, But Can't Quite Pull it Off (VIDEO)

As we stare down the barrel of four years of President-elect Donald J. Trump, it's important to remember that it could have been worse.

Ted Cruz could be President-elect.

As you consider whether or not that would, in fact, be worse, please watch this video of Ted Cruz struggling to describe why queso is good.

.@tedcruz passionately defending cheese: "Queso is made to be scooped up with tortilla trips, dribbling down your chin and onto your shirt." pic.twitter.com/8j1u4ix5W0

You probably have lots of questions - for example, why is Ted Cruz talking about queso? Why does it take three tries to answer the question? Since we know he hates avocados, does that mean he's never had guac mixed into queso - and if not, how can he REALLY know how good queso can be?

These are all incredibly important questions to an increidbly un-important topic. Best way to answer everything is to break down the video, and see what we find out. 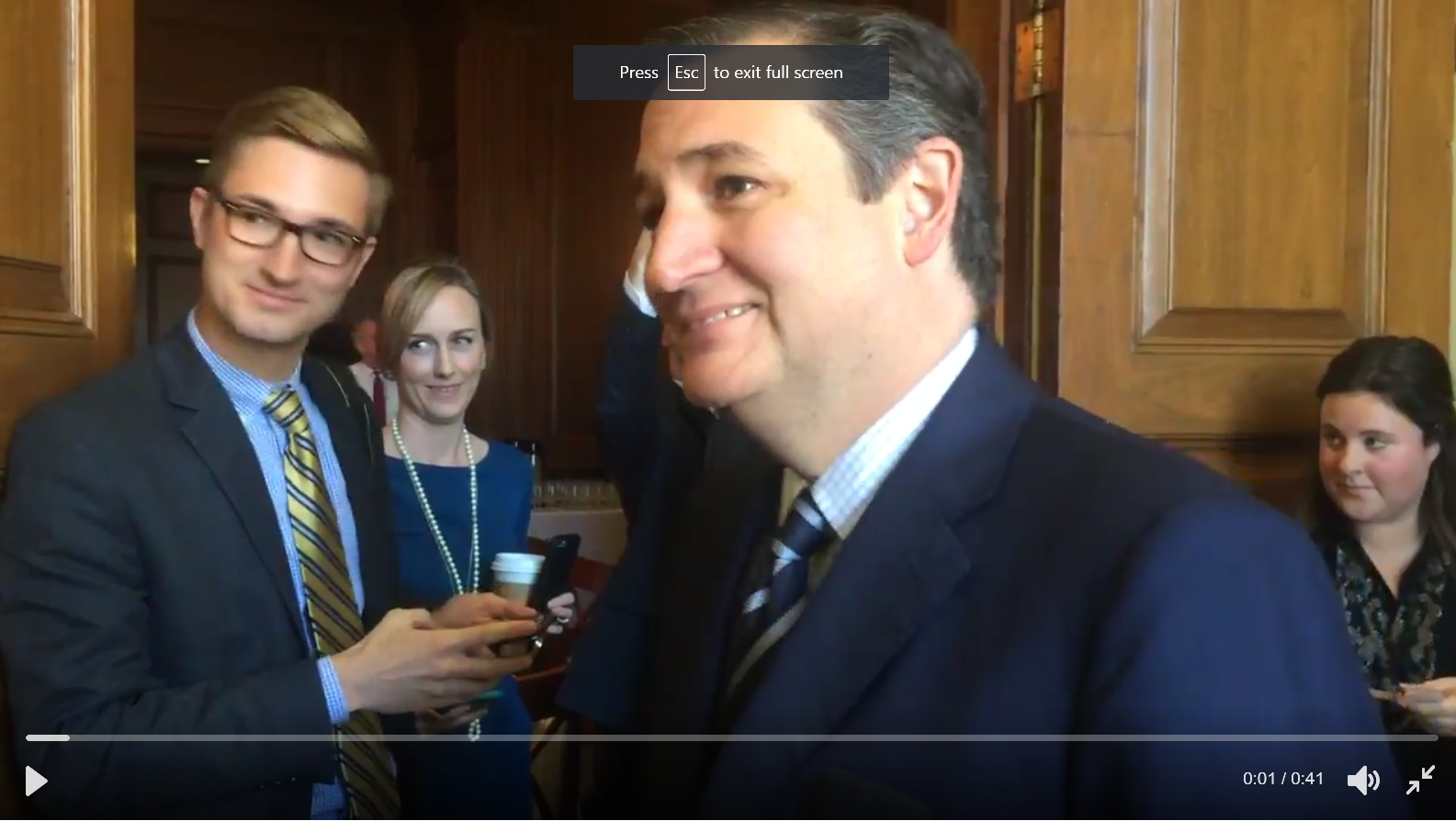 First, context. A few weeks ago the Wall Street Journal wrote a silly story about some silly people from Arkansas making the silly claim that they invented queso, but they call it cheese dip and it's better than what we have in Texas. It was all quite silly. Which makes it perfect for politicians to fully embrace.

The Republican Senators from Arkansas and Texas, including our own Sens. John Cornyn and Ted Cruz, hosted a taste-testing in Washington today to settle the score. We already know the results (more on that later).

Overall, it was supposed to be an easy, fun thing. The two standing to the left of Cruz in the freeze-frame above are amused; the woman to the right is amused at their amusement. A generally pleasant time and place and Q&A and nothing that Cruz could mess up.

Video segment: 0:03 - 0:03, "The Panic"
Transcript: [silence, as Cruz contemplates the futility of man and prays a piano comes crashing down on his head] 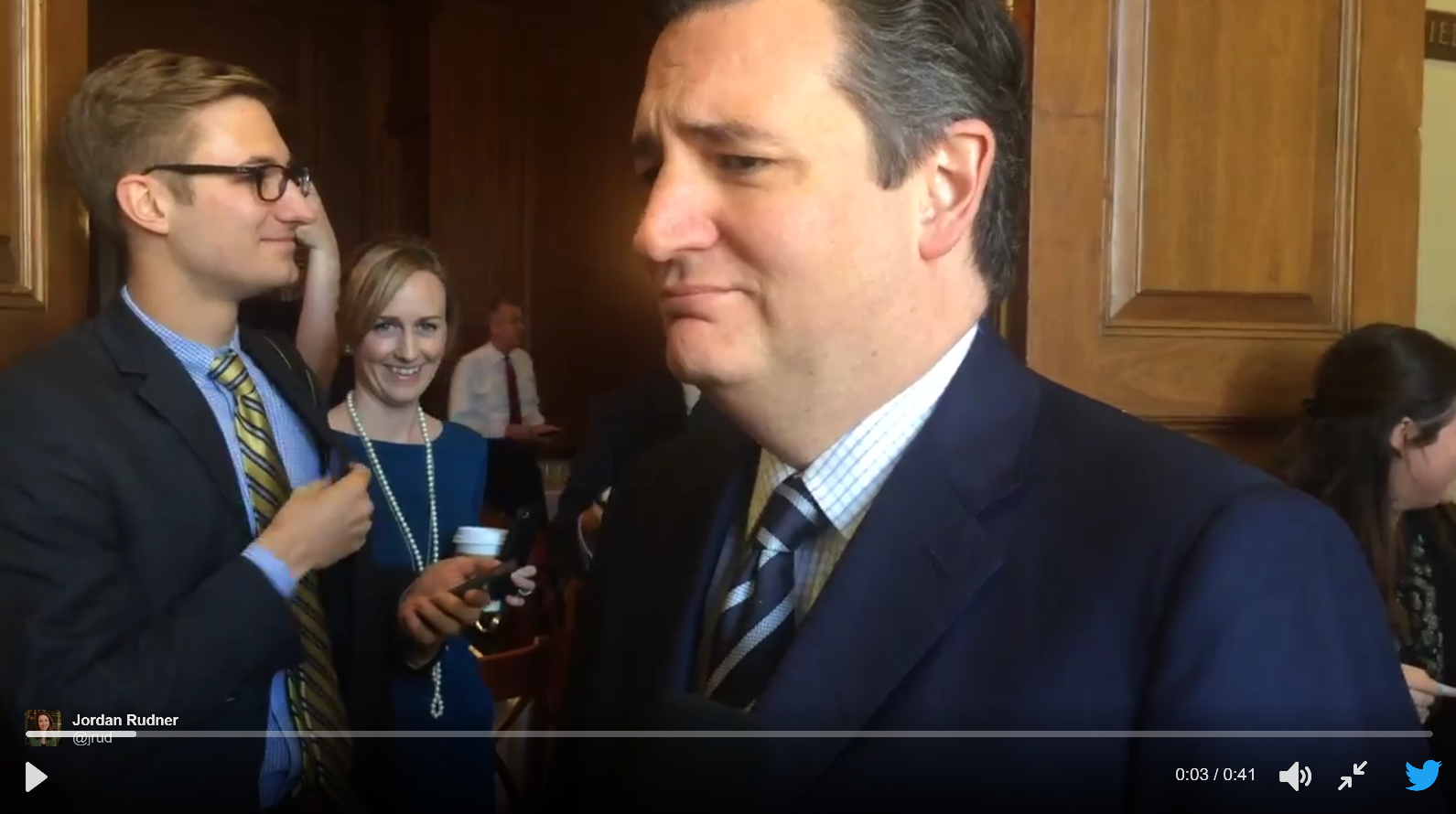 That is the face of a man who is shook. Of a man who is lost. Look at that face and know with absolute certainty that Donald J. Trump destroyed that man. Like a golfer who lost his swing or a pitcher who can't throw a strike, Ted Cruz - he of silver-tongued sermons and profound pontifications - has no idea why Texas queso is good. He has no idea why he lost the primary, or why he gave a speech not to vote for Trump, or why he then told everyone to vote for Trump in the end. He has no idea who he is or where he lives or how he got here or why anything exists.

Ted Cruz does not know why queso is good. 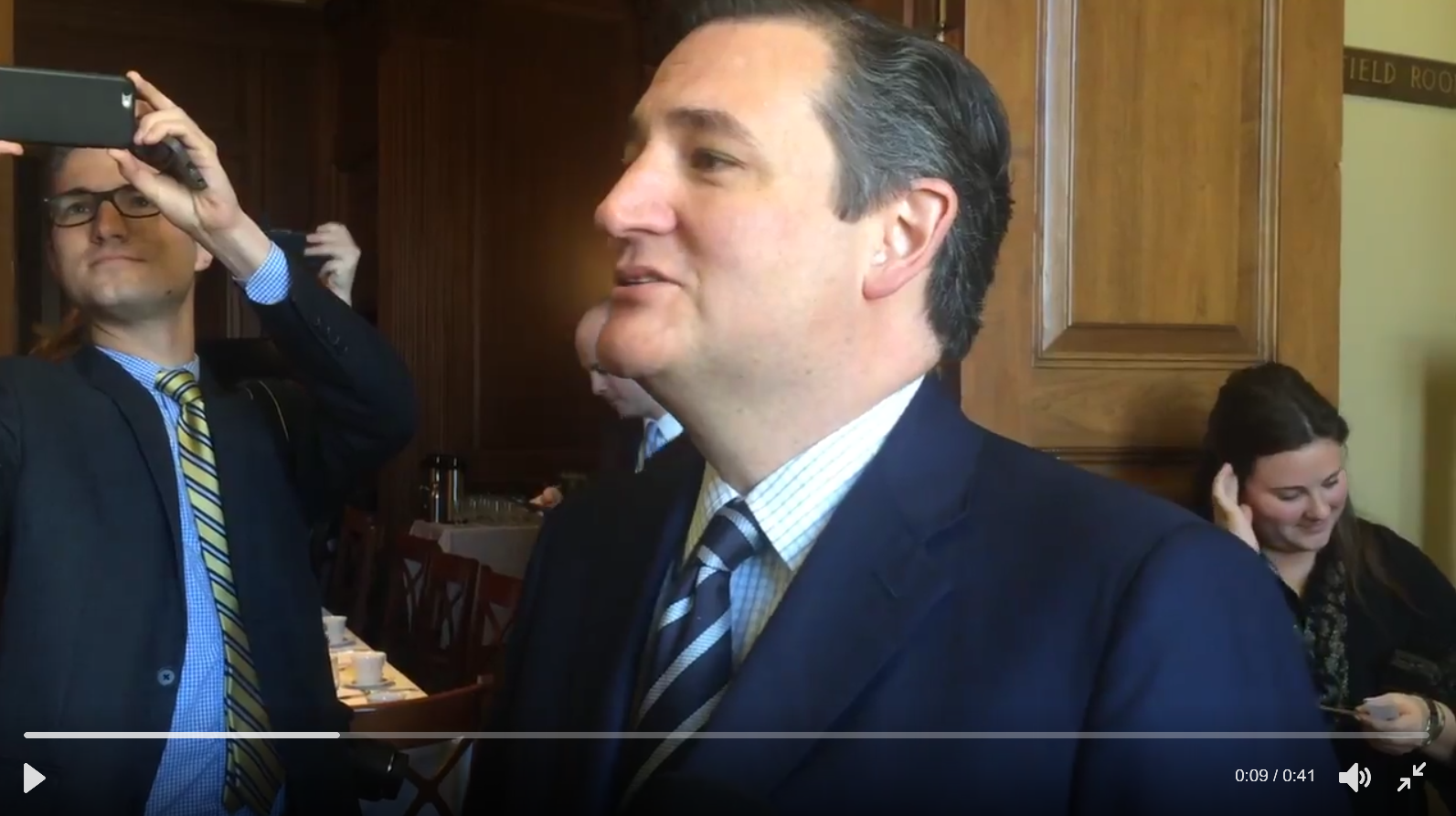 Cruz tries to recover, but stumbles. He stumbles so badly that by the end of this segment, the woman behind him and to his right can't handle it anymore.

His first response - "it just tastes good" - would have worked except he's so nervous his voice is an octave higher than normal. Maybe he's just nervous. Maybe he's thinking about that time he named Carly Fiorina his Vice President. In any case, he bumbles his first (and best) answer because of the deep sadness that has encapsulated every fiber of his being.

Cruz's next two responses are equally bizarre. He says, "it's good for the soul" so fast you know even he can't believe he said that out loud. And then the drawn out pause with his final attempt, "good queso... ... ... ... ...relaxes you" is funny because Cruz clearly doesn't know what the word relax means, or how to feel it. Artificial intelligence just hasn't advanced to that complex of emotions, yet.

Video segment: 0:10 - 0:16, "The Attack on Vienna"
Transcript: "Look, cheese dip can be served on a Ritz cracker or with one of those tiny vienna sasusages." 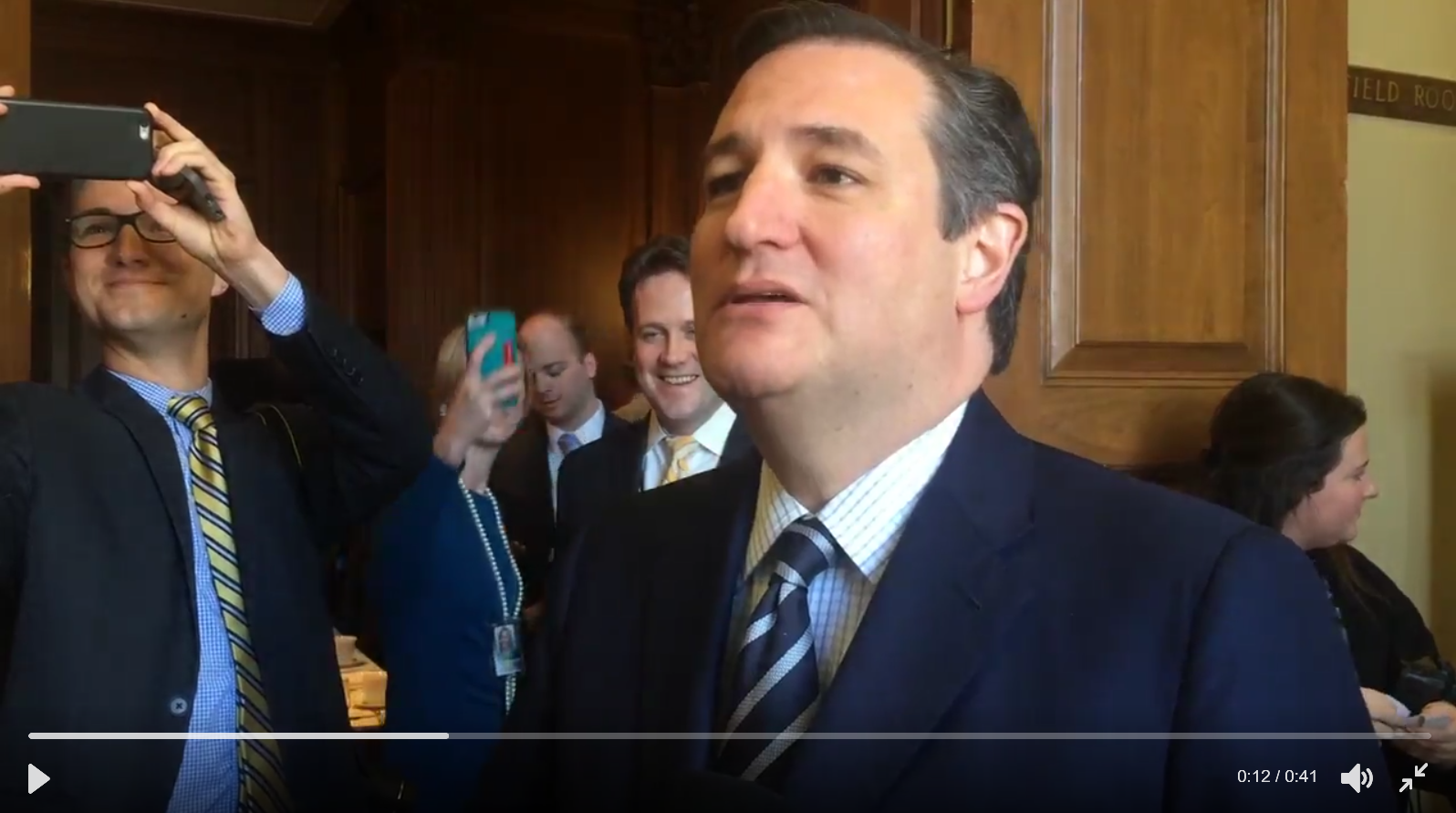 Realizing he's drowning in a melted cheese catastrophe from which he may never escape, Cruz goes to his last and only hope: the attack.

He dips his head, pulls it back up, looks straight at the reporter, and - as clearly and confidently as a shriveled shell of a man can - says to him: "Look."

He's gonna level with you, reporter. You are asking the wrong questions. It doesn't matter that Texas queso is good; it only matters that cheese dip is the devil. Let me make you afraid of cheese dip, and the weak, foreign sausages you eat them with. Only then will you know the greatness that is queso.

Video segment: 0:17 - 0:24, "The Chin Dribble"
Transcript: "Queso is made to be scooped up with tortilla chips, dribbling down your chin and onto your shirt." 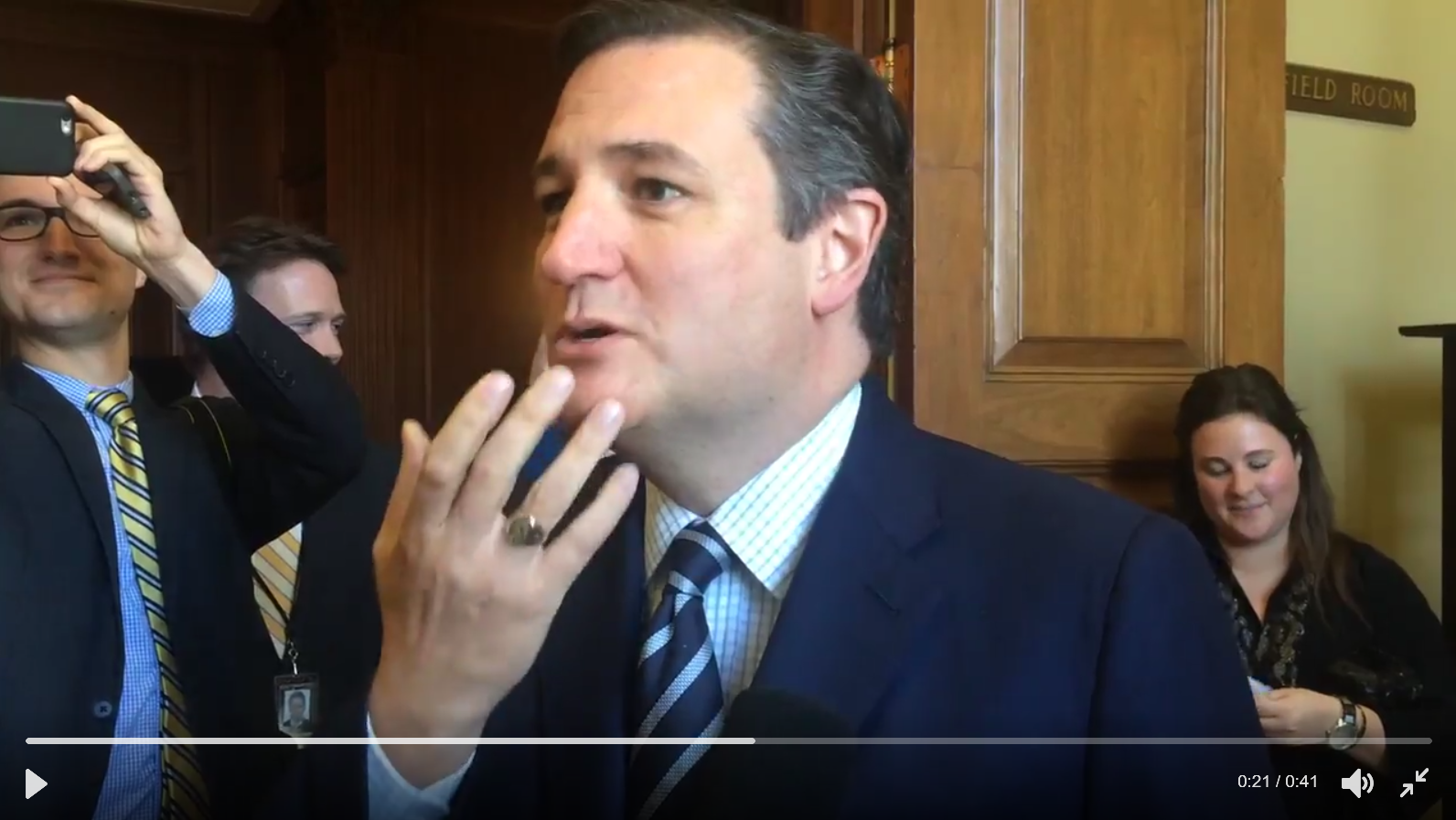 There are obvious jokes to be made here. I'm not going to make them...but you can find them here if you want.

Let's just say this is peak Cruz-trying-to-be-normal, and it comes off as peak Cruz-may-be-the-Zodiac-killer-or-at-least-Kevin-from-The-Office.

Let's move on before anyone gets fired.

Video segment: 0:25 - 0:41, "The Importance of Surrealism in Political Theater (How Ted Cruz Killed the Party: The John Cornyn Story)"
Transcript: "One is a visceral, emotional family bond as you and your kids pour into nachos covered in queso. The other one is [pausing for effect] party favors served over afternoon tea." 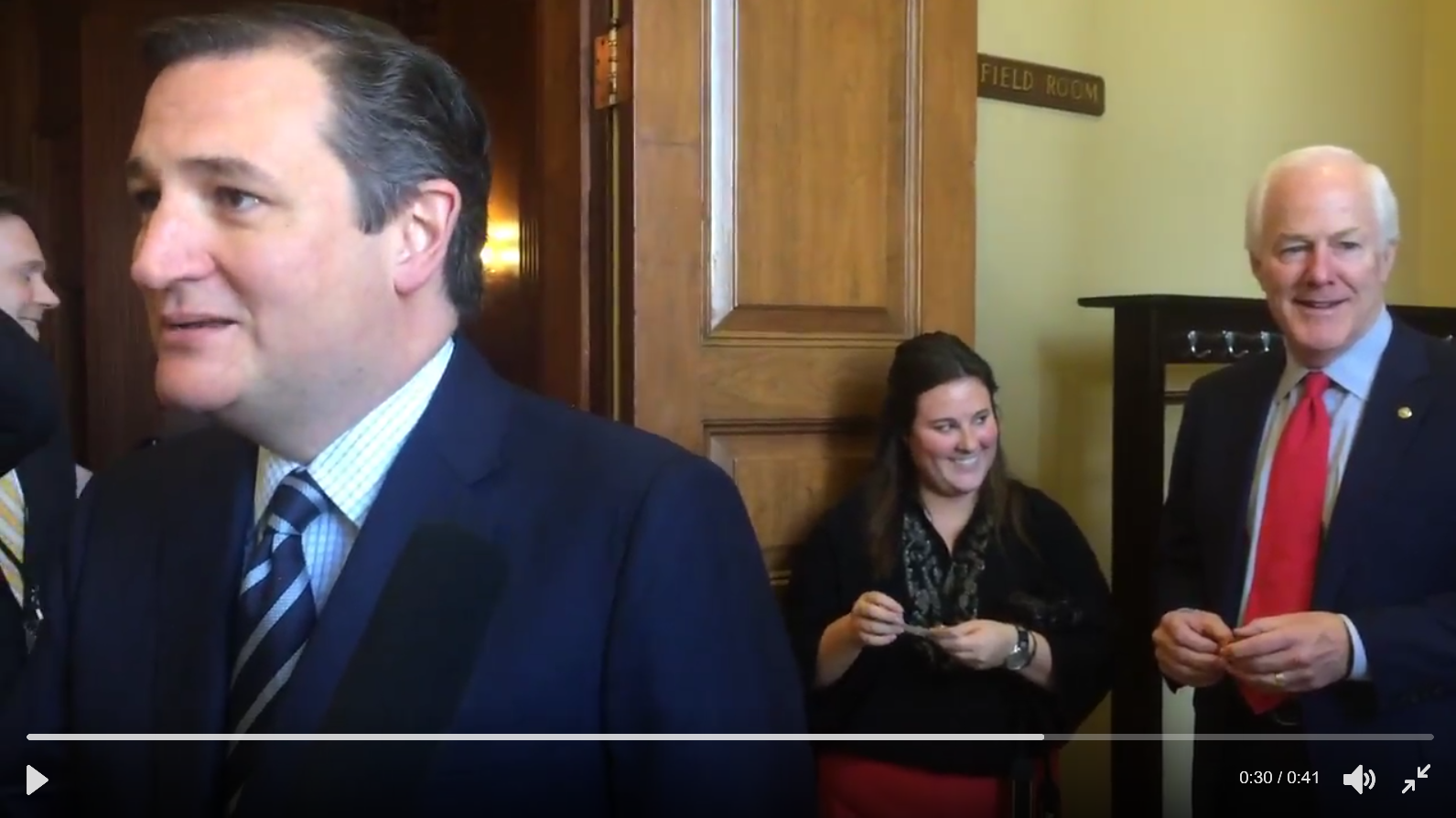 Read that transcript again. Now remember the prompting question was, "Why is Texas queso good?" Now read his final answer one more time.

Ted Cruz began lost, not knowing how to answer a question. He's now reached a level of nonsense that his fellow Texas Senator (to his right, red tie) can only half-smile at the tsunami of awkwardness that has engulfed him during what was supposed to be an easy, silly day.

In fact, Cruz's final phrase sounds so much like James Spader's turn as boss-man Robert California in The Office at the end that Cornyn can do nothing but flee the scene: 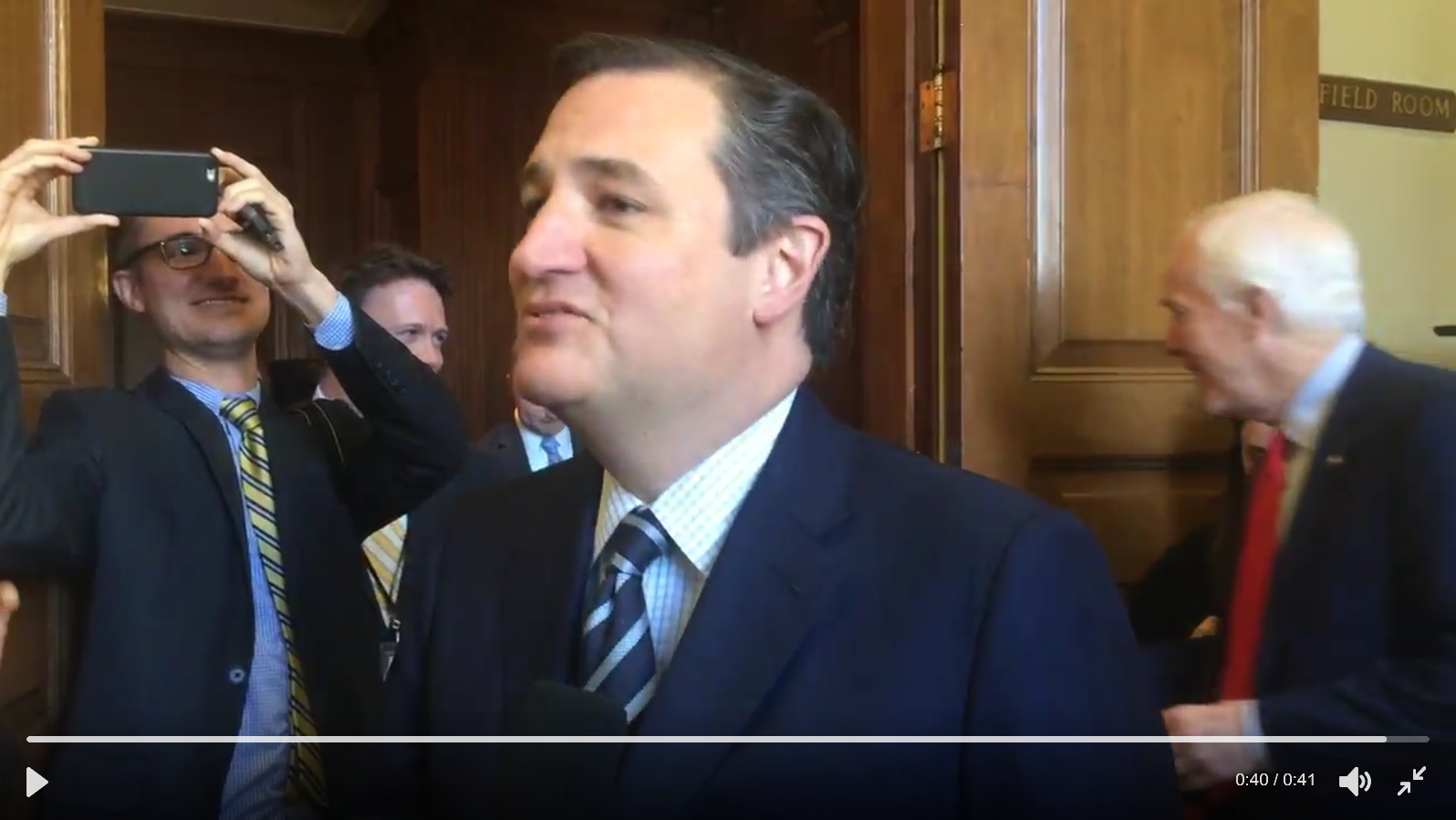 Were that it was all so simple, Mr. Cornyn. May you find happiness in your escape, and may we all have doors we can exit whenever we hear Ted Cruz begin to talk again.

As this blog was published, the Dallas Morning News broke the story:

Ted Cruz killed queso, and 2016 gets one more great tragedy to revel in.