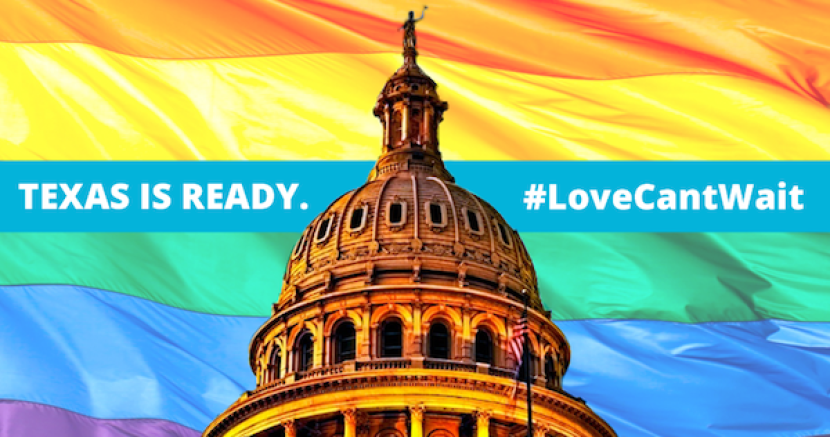 This was a historic week in the fight for marriage equality, with the United States Supreme Court hearing oral arguments in Obergefell v Hodges, a landmark case that is likely to bring the freedom to marry to all 50 states by this summer.

But just as progress is being made nationally, Texas Republican politicians are digging their heels in, pursuing an aggressive legislative strategy to maintain Texas’ marriage ban. These radical lawmakers’ bills, designed to discriminate gay and transgender Texans, are moving swiftly through the process.

Click here to tell Texas Republicans you support the freedom of every Texan to marry the person they love.

On Tuesday, the very same day the Supreme Court heard the marriage case, Republican Senator Craig Estes filed SB 2065. The bill, filed weeks after the filing deadline, was scheduled for a hearing in less than 48 hours, an unprecedented speed. This Indiana-style so-called ‘religious freedom’ bill would allow religiously affiliated organizations, clergy members, and employees of a religious group to refuse to provide services, open facilities, or sell goods to gay and lesbian couples.

The broad bill goes beyond members of the clergy, who already have the legal right to decide whether to perform a gay or lesbian marriage, and uses vague terms that could lead to harmful consequences. Democratic Senator Jose Menéndez delayed the bill from being heard in the Senate State Affairs committee until Monday, May 4.

House Moves Ahead with Anti-LGBT Bills

This legislative session,  Republicans have introduced more than 20 bills that would codify discrimination against gay and transgender Texans. Two of these bills, HB 3864 and HB 4105, have moved out of committee and are headed toward debate on the House floor.

HB 4105 by Rep. Cecil Bell, the most flagrant attempt to undermine the Supreme Court’s expected ruling striking down Texas’ marriage ban, would make it illegal for state and local officials to issue marriage licenses and would bar using public funds to issue licenses.

Though this bill would be wholly unconstitutional, if it becomes law, it could open the door for Texas to pursue lengthy and costly legal challenge against LGBT Texans’ freedom to marry. And with over 40 Republican co-sponsors, the amount of support HB 4105 has received is shocking.

HB 3864 by Rep. Scott Sanford is a religious refusal law that targets child welfare programs and would allow organizations that receive taxpayer funding under state contract to refuse to place a child with a qualified gay and lesbian parents.

Republican lawmakers appear determined to make the same mistakes and face the same overwhelming negative backlash that states like Arkansas and Indiana have.

And Then There’s Ted Cruz

In an obvious effort to pander to his conservative base, U.S. Senator Ted Cruz introduced a bill that would establish a constitutional amendment shielding states with marriage bans, like Texas, from legal action. While the bill doesn’t stand a chance of passing, Cruz’s politically-motivated defiance illustrates just how hell bent Texas Republicans are to be the wrong side of history.

The Texas GOP’s effort to discriminate against gay and transgender Texans has reached new lows. Join the more than 45,000 Texans who have pledged their support for marriage equality and tell Texas Republicans that you support every Texan's freedom to marry.