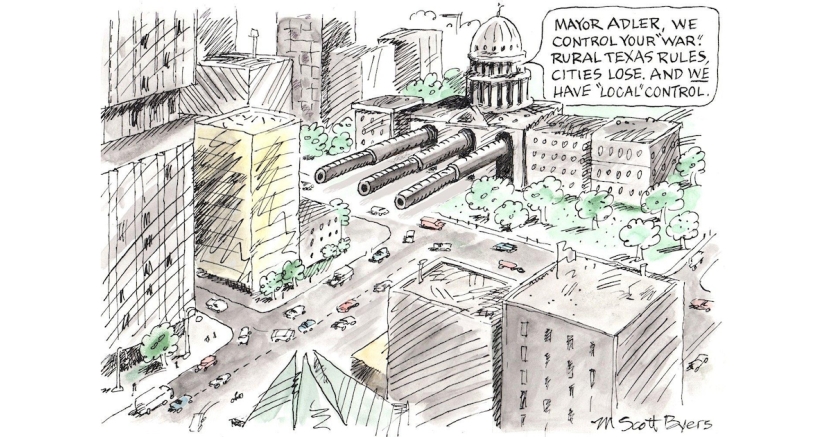 The state aims to take self-government away

Austin Mayor Steve Adler was right when he observed recently that the Republican-led state government “has declared war against” Texas cities.

The state is trying to take self-government away from cities, counties and school districts. It is a war on local government. It is also a war on democracy.

Why, you ask? Consider this: Eighty-five percent of Texas residents and 80 percent of Americans live in urban areas. A glance at any state or national map of election results shows disproportionate Republican support in rural areas.

So, Republicans have a stake in ghettoizing or marginalizing urban areas. The war Adler speaks of is a Machiavellian plan to allow 15 or 20 percent of Texas residents to determine the policy outcomes for another 80 or 85 percent of residents. Let that sink in.

Gov. Greg Abbott, Lt. Gov. Dan Patrick and their allies didn’t think up this sneaky plan all on their own. It is a plot hatched by, among other groups, the American Legislative Exchange Council (ALEC), a well-funded, far-right “think tank” that is not bashful about subverting democracy on behalf of special interests.

No, it’s not a coincidence that this war on local self-government has heated up just as the Republican base has retreated back to rural areas — areas losing more and more population to urban areas all the time. The only way the GOP can maintain power is by unbalancing power in favor of rural areas.

It is another front in what is now an obvious Republican effort to destroy voting rights and effectively disenfranchise millions of eligible voters. They are gerrymandering legislative districts, constructing new barriers to voting, purging voter rolls, and manipulating the upcoming census for partisan gain. The list goes on.

And, in the case of preemption, they are simply passing laws that strip local folks of a say about their neighborhoods, schools, taxes, health care, police and fire protection.

ALEC propagandists have come up with all sorts of obscure justifications, chief among them that local governments are, by statute or constitution, the creations of state governments, therefore state governments have the authority to tell them what to do.

Why, then, have cities at all, or at least, why have city elections? Why have local school boards or county commissioners?

The GOP will, ultimately, lose this war, because its rural base is shrinking. But Republicans will in the meantime win battles and diminish the power of local government, certain it may take decades to fully restore self-government to local folks.