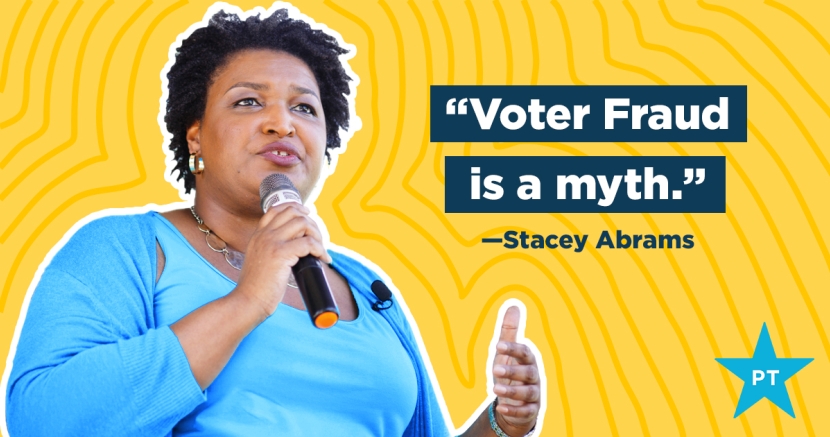 Voter suppression works because it is insidious. We need to make sure people know how to fight it.

Here in Texas, we sadly know a thing or two about voter suppression. Whether it be erroneous voter ID laws, bogus voter registration laws, or Texas Secretary of State nominee David Whitley’s latest voter purge, Texas has been ground zero for Republicans’ attacks on voting rights.

Voter suppression attacks our belief that our voice matters in a country where it is harder and harder to be heard.

We always look for how our leaders talk about voting rights, searching for someone who believes, as we do, that protecting voting rights are a critical step in mending our broken system.

More leaders need to speak to the issue with the same clarity as Stacey Abrams, former minority leader of the Georgia House and 2018 Gubernatorial candidate. Abrams' conversation at South by Southwest tapped into not just the political problem voter suppression provides, but the personal crisis it insights.

And we don't talk about it at all because we assume its a personal problem, that someone was being irresponsible. Voter suppression works because it's insidious because it looks like it’s supposed to happen. We have to talk about it all the time. We have to amplify it on every platform, and we have to demand our leaders do something about it. You should not vote for a presidential candidate who cannot tell you how they will fight voter suppression.”

We have to talk about it all the time. We have to speak up and speak out when these rights are threatened again and again. And we must do so with the vigor that those spreading the myth of voter fraud have toiled.

What we can’t do is let conservatives conflate the concept of voter fraud with voter suppression or let them use “election integrity” as a ploy to attack our rights.

“We’ve conflated two very different ideas. Voter fraud is a myth...We have a hard enough time getting 50% of people to do anything people are not getting in line three times to vote, that’s not happening. Often what's called voter fraud is actually people making a mistake because voting rules differ not only from state to state, but sometimes county to county. We do not have a uniform democratic process in the United States.

When voter suppression is used in an election, then we know that every vote is not being counted. As progressives who believe firmly in the right to vote, we cannot allow elections to be called until every vote is counted. Abrams showed us the power of her unapologetic non-concession because concessions condone the foul play that got us to that result.

“It was insufficient for me to prove empirically that I could win, which is why I acknowledged empirically that Brian Kemp had won. But I refused to concede because concession means that the process was proper, that the result was true and right and I cannot say that. But I think what we need to learn from that is that Georgia is not alone, Georgia is one of fifty states and voter suppression happens nationwide.

What is incumbent upon any candidate in 2020 is that we do not call the election until every vote is counted and that means that we sometimes have to take time. 11 p.m. is not a magic hour; we may not know who the President of the United States is by the evening news. And if we don’t, we can wait...We can wait for democracy to be right, that is our responsibility.”

Stacey Abrams’ voice is going to be critical in the coming years because she can teach us how to speak to our values on voting rights. We can win the long fight on voter suppression, but we must speak our truths with the ferocity Abrams has shown.