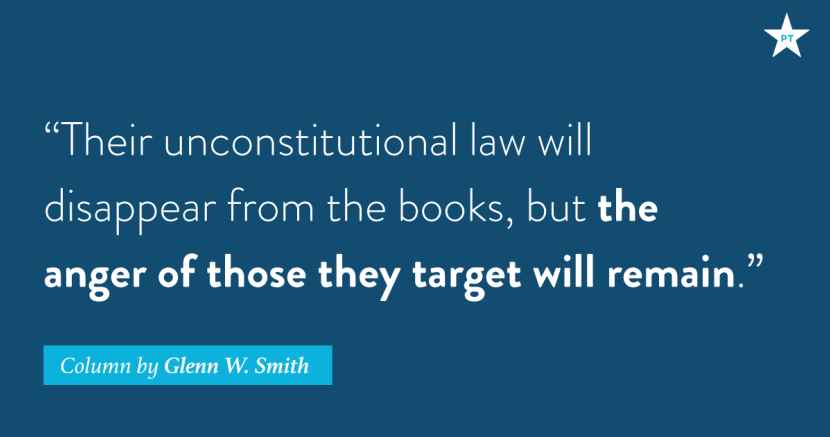 So Much for GOP’s Sanctimonious ‘Rule of Law’ Chant

The So-Called ‘Sanctuary Cities’ Bill Is Clearly Unconstitutional and the GOP Knows It.

In case these lawmakers haven’t recently read the Fourth Amendment of the Constitution, I present it here as a public service:

“The right of the people to be secure in their persons, houses, papers, and effects, against unreasonable searches and seizures, shall not be violated, and no warrants shall issue, but upon probable cause, supported by oath or affirmation, and particularly describing the place to be searched and the persons or things to be seized.”

Meditate on that, lawmakers.

The Legislature openly defies the Fourth Amendment with its so-called ‘sanctuary city’ bills. Those bills would force local jurisdictions to imprison people based on emails and phone calls from federal immigration police. No judges are involved. There are no oaths or affirmations. There is no probable cause required.

Apparently, even U.S. Attorney General Jeff Sessions has seen through the folly. He told mayors from around the country that a sanctuary jurisdiction would be one that violated 8 U.S.C. 1373, which prohibits local authorities from enacting laws limiting communication with Immigration and Customs Enforcement. No jurisdiction in Texas violates that provision.

Communicating with ICE is one thing. Imprisoning people without probable cause is another. How would Republicans like it if police could arrest them on the golf course and imprison them on suspicion – but not probable cause – of operating an illegal gambling operation?

Or, say one was arrested legitimately for outstanding traffic warrants. Once the fines were paid that person would normally be released. What would happen if an angry ex-spouse or feuding neighbor called the jailor and said, “Keep him in jail. I think he may be violating several other laws.”

That is, generally, what the bills approved by the House and Senate would permit. Making it worse, it’s likely such a law would only apply to people made suspect by the color of their skin. And the House version, stupidly, includes a provision which would allow local police to demand people “show their papers.”

A federal judge in Illinois has already tossed this kind of monstrous, unconstitutional and racist law. Judge John Z. Lee ruled that the law was unconstitutional because “immigration detainers issued under ICE’s detention program seek to detain subjects without a warrant…”

That seems clear enough. The ruling is on appeal, and right now it applies only to Illinois, Indiana, Kansas, Kentucky, Missouri and some other states. In those places, ICE can still request detainers after they show probable cause and obtain a warrant.

Why won’t they honor the Constitution, obtain warrants, and end this nonsense? Are they just lazy? Some ICE officers seem to enjoy the unrestrained power they have over other human beings, so it may be they just don’t want their power limited.. But surely they could do what every other law enforcement officer has been required to do throughout the history of the United States.

Assuming the Legislature agrees on a final version of the bill and that Gov. Greg Abbott signs it, it will soon go to court and be declared unconstitutional.

Will that disturb the lawmakers? Probably not. Part of their motivation is simply to frighten people, brown-skinned citizens and people without papers. Citizens might have a grandmother without papers and be afraid of calling attention to the family and risking the grandmother’s deportation. This is the purpose of the debate.

Republicans want these folks to keep their heads down. They tell citizens – citizens! -- that the authorities will be watching polling places before and after this ridiculous law is declared unconstitutional. If the authorities don’t like the way you look, they’re coming for your granny.

Judging by the courageous and impassioned opposition to this clearly racist move, the Republicans are in for a surprise come election time. Their unconstitutional law will disappear from the books, but the anger of those they target will remain.

Federal courts have six times charged the Texas GOP with intentionally discriminating against minorities with their Jim Crow-like election laws. Those tattoos are not coming off. They now attach to the “R” by their names on the ballot. Moderates should not have gone along to get along. Like their own grandmothers likely taught them, they will be known by the company they keep.