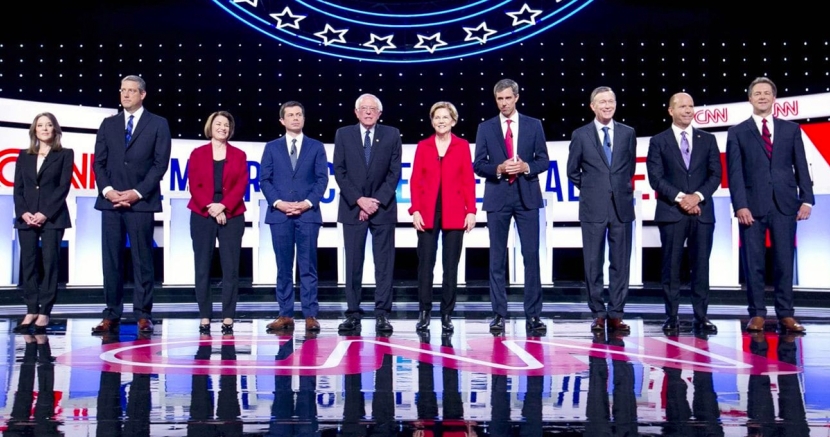 Selecting candidates for the Houston Democratic Debate via penalty kicks

The truth is, there’s no good way to have a debate when you have this many candidates running, and there’s really no good way of determining who gets into a debate, either.

Many Texas political junkies are excited to see the next Democratic primary debate come to Houston on Sept. 12 and 13.

But at the end of August, the conversation is as much about the political policies of the candidates, as it is about the Democratic National Committee’s basis for choosing who gets into the debate.

Currently, the criteria for candidates to take the stage is to earn at least 2% of support in four qualifying national or early state polls from June 28 to Aug. 28, and to have raised funds from at least 130,000 unique donors.

It’s like determining a tied soccer game with penalty kicks – it’s not a great solution, but after 90 minutes of regulation and 30 minutes of overtime, you have to find a way to reach a decision without everyone passing out.

While some may be uncomfortable with the idea of fundraising as a qualifying aspect, we should keep in mind that candidates who have popular ideas get popular support, and that support comes in many ways: votes, polls, and donations.

As for the polling element, I personally do not like using national polls as a qualifier, because at this point the presidential campaigns are (or should be!) focusing most of their resources on the four early primaries in February:

Who would qualify without a fundraising requirement?

As a thought experiment, I decided to see what the debate stage would look like if the DNC eliminated the fundraising requirement, took out the national polls, and just focused on the early states.

I reviewed all of the early state polls listed in the Real Clear Politics primary polling index from July 3 to Aug. 21 to see which candidates were polling at 2% in four or more polls. And what I found was that the results aren’t that different (variances listed in bold):

Who would qualify according to early state polls:

Who has qualified according to DNC rules:

We love our hometown candidates here in Texas, so naturally, we’re glad that Julián Castro and Beto O’Rourke will both be in the Houston debate.

But currently, Tom Steyer and Tulsi Gabbard are polling at 2% or more in five early state polls. Unfortunately for them, those aren’t qualifying polls. I believe the distinction here is so that candidates don’t commission their own polls with misleading questions (i.e. a “push poll”) that skew the data.

For the sake of argument, perhaps Steyer and Gabbard should be included in the debate, too.

As for the remaining candidates in the race, many are already feeling the pressure to bow out and we’ll probably see some start withdrawing after the next cut.

The truth is, there’s no good way to have a debate when you have this many candidates running (which is 21 as of this writing), and there’s really no good way of determining who gets into a debate, either.