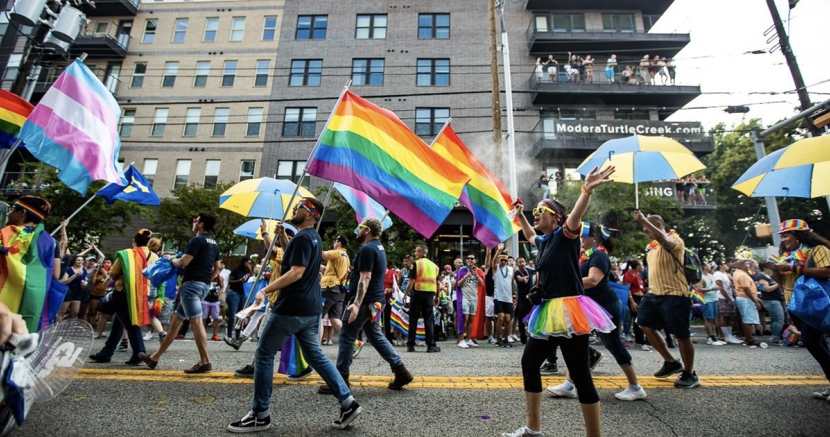 The rise of organizing in North Texas: Queer rights and better centering the LGBTQIA+ community

Queer liberation has not come and gone. The LGBTQIA+ community, allies, and advocates are working tirelessly to bring about change in 2020 and beyond.

The question is: How do we create tangible policies to change how people view the humanity of an entire community of people?

In North Texas, many advocacy groups and queer organizations are imploring that we switch the question into demanding answers that help the community feel safe - especially as Dallas leads the nation in murders of trans people. Even when we can’t create policies that change opinions, policies to protect folks’ livelihood can be achieved.

Ahead of the 2021 Texas Legislative session, there is much to be done in pursuit of queer liberation for all.

Dr. Carmen Cruz, a founder of OUTreach Denton, a queer resource organization, and PriDenton, the Denton Pride organization, said the changes in Denton’s acceptance of the queer movement has warmed her “big old gay heart.”

Cruz has been instrumental in queer organizing in the city of Denton and has seen it go from having virtually no collective resources to covering the whole downtown square in rainbows in celebration of Pride.

Although there is still work to be done, this generational shift has improved over time, even in a place like North Texas.

“At the end of the day, we are still a part of the Bible Belt and there’s so much old-world tradition to break through,” Cruz said. “It takes multiple generations to break an attitude.”

There is an incredible level of investment from activists and activist organizations who are committed to breaking the mold. People have begun to see the fruit of this labor across the Dallas-Fort Worth area.

Organizations like the Human Rights Campaign (HRC) have seen the change Texas can have on attitudes across the country and have concentrated resources in DFW to assist this community.

Rebecca Marques, HRC Texas state director, said Dallas holds the title for their largest volunteer steering committee and there is something unique about how activists in North Texas work in their cities.

“I think we will have one of the biggest spreads in Texas [in DFW] this upcoming 2020 election than ever before,” she said.

Both Cruz and Marques agree that working to build relations through cross-movement organizing will be key to real change for LGBTQIA+ Texans.

"Intersectionality is key to all the work we do," Marques said. "But I think logistically in a place like Dallas-Fort Worth, where it is hard to get people engaged or out of their houses, I think that work becomes incredibly important here on the ground."

Marques said Texas HRC will work with other LGBTQIA+ organizations, but creating coalition partnerships with reproductive rights groups, immigrant rights groups and racial justice groups will show a commitment to those who are multiply marginalized.

Even with so many feet on the ground, change cannot happen until representatives listen and systems change.

"We know, particularly in North Texas, a lot of these communities are more progressive than they seem in their representatives' votes," Marques said. "I think a large part of this is making sure our elected officials see all of their constituents and hear all of our voices, which has been a challenge."

Cruz said being at the table creates change, but it has always been more about the struggle of getting to the table.

Racism, homophobia, transphobia and other “-isms” have existed for decades and will continue to exist for decades, but Cruz said we can fight for better public education to give these communities the proper tools.

With the capacity Texas HRC has, Marques said coalitions with more groups will be the most important item on their everflowing to-do list to queer liberation.

"They are going to be very important to our long term work here in Texas and especially North Texas because it's critical for all of us...building lasting relationships to make meaningful change locally and at the state level,” she said.

One of the top concerns to be dealt with on the queer agenda is how do we make sure Dallas never again leads the nation in trans murders as it did in 2019.

“That is a title that is unacceptable," Marques said "We need to center Black trans voices, specifically Black trans women, especially here in Dallas. [...] to long term equality in the queer movement."

Cruz agrees and said transphobia in the gay community needs to be dealt with at an individual level as well.

She said she understands how difficult it is to work with the state when many have experienced violence at the hands of it. But, Cruz also believes we need to hold the “complexity of multiple truths” while organizing around police and other state entities.

Even without the more macro tasks at hand, Cruz believes it comes down to hearing people’s stories at a microlevel.

“The deeper side of this is it is really such important, purposeful work for my life,” Cruz said. “It is a deep passion and mission for people to feel their authentic self and the strength in that.”

As we look at what needs to be done for queer liberation, every part - small and big - must work together to agitate the systems put in place.

People have been doing the work for decades. It’s time we listen, believe in their messages and validate their livelihood through policy and practice.

"I think we have a very real shot at creating a pro-equality majority in the state house," Marques said. "I also think that North Texas is instrumental to that happening.”

As North Texas will go, so will the state.