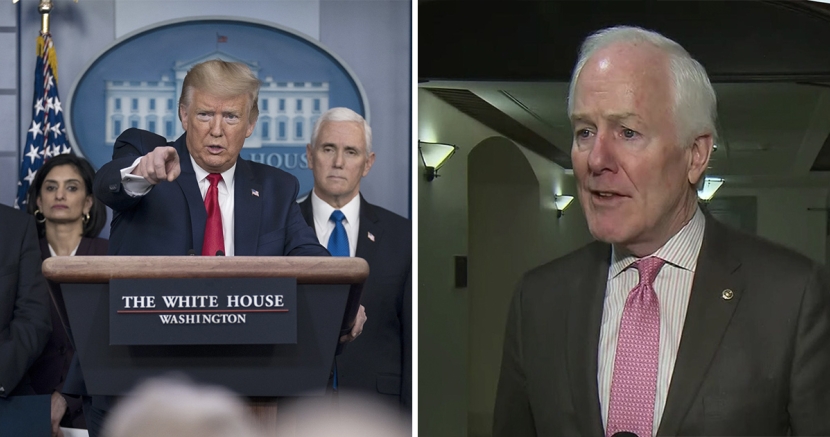 There they go again - only the Republican Party could turn a pandemic into a fight about racism.

During the Mar. 18 White House press briefing, Donald Trump repeatedly referred to coronavirus as the “Chinese virus.” Reporters pressed him on his remarks, stating that many people consider it racist, and that it could put Asian Americans at risk from seeking or receiving care.

His response was as Trumpian as it gets, “It’s not racist at all, they probably agree with it 100%.”

The Washington Post reports that Asian Americans have shared stories of aggressions since the virus started appearing in the United States.

“I’m sure anyone would regret profiling a virus along ethnic lines…we need solidarity, we need to work together… The pandemic of influenza in 2009 originated in North America. We didn’t call it the North American flu.”

And then Texas Senator John Cornyn piled on.

Cornyn, who represents the third largest Asian American population in the nation, was asked by The Hill if he was on board with Trump’s remarks, and if it is helpful that it singles out a group of people to blame (you can see the video of the full exchange here).

“The culture where people eat bats and snakes and dogs and things like that, these viruses are transmitted from the animal to the people. That’s why China has been the source to a lot of these viruses...like swine flu,” Cornyn said.

Not only are those racist stereotypes, but they are also complete lies as shown in a fact-check piece by The Texas Tribune, which points out that Cornyn was pushing a debunked myth and incorrectly identified China as the source of two other outbreaks.

In other words, Cornyn was pushing fake news. It will be interesting to see how this plays out in swing districts this year, particularly in the heavily Asian American swing districts of Fort Bend and Harris counties.

Apart from the racist element, there’s a health hazard in singling out groups of people who may in turn feel they cannot seek medical attention without subjugation. Calling names doesn’t fix the problem, but the coronavirus proves that the urgency in maintaining the health of our entire community does.