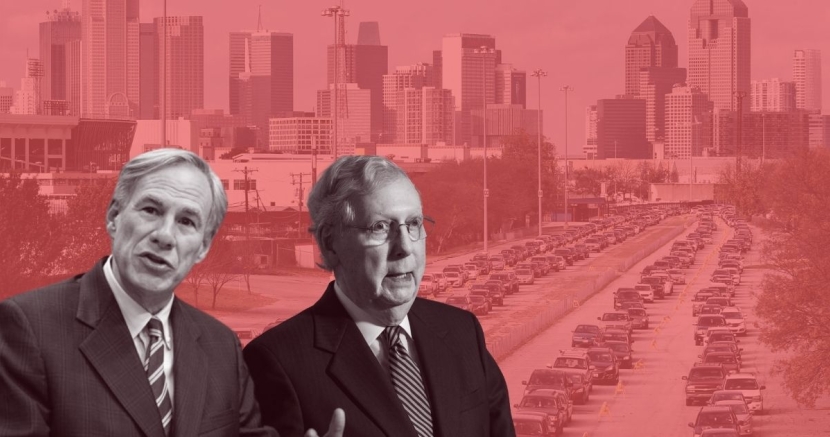 Lisa Nhan
The pandemic has led to a record number of Texans going hungry, and Congressional Republicans and the Texas GOP aren’t doing enough to stop it.

Texas made national headlines back in November and in April, when thousands of cars lined up at food distribution events. And as the coronavirus pandemic goes on and Texas Republican officials have failed to provide aid or leadership, millions of Texans have continued to go hungry.

According to a November survey by the U.S. Census Bureau, over 2.5 million households in Texas reported that in the week prior to taking the poll, they either sometimes or often lacked enough food. Of these households, 66% are Black or Hispanic. Now, Texas food banks are struggling to meet this increase in need. Workers are concerned about food shortages growing as vital federal and state aid programs end soon.

Gov. Greg Abbott’s cut to state revenue spending caused major cuts to a Texas Department of Agriculture program, which provides millions of pounds of food to Texas food banks. Texas received $11.2 billion from the Coronavirus Aid, Relief, and Economic Security (CARES) Act in March and must spend all of it by the end of this year, or the remainder goes to the federal treasury. And yet, just a week ago, Abbott still had $2 billion left to spend and had not yet detailed how he’d allocate it. The lack of transparency has left lawmakers frustrated as Texans need this aid for necessities like food and rent payments. Additionally, some federal aid, which provides millions of dollars, will end in December and has not yet been renewed for 2021.

Texas food banks are seeing more and more people in need of their vital services. The Central Texas Food Bank provided aid to 297,000 people in September and that number drastically increased to 343,000 in October.  As residents continue to face a horrific outbreak in El Paso, it’s estimated that food banks servicing that area would need 11 million more pounds of food monthly to meet demands.

The harm that comes with this pandemic is not just happening inside hospitals. Many thousands of Texans are having to navigate unemployment, evictions, and food insecurity all at the same time. So much of this harm could have been prevented with proper public health policy.

Even the White House has asked multiple times for Texas state leaders, like Abbott, to enact policies to stop community spread, but still, he refuses to take the necessary steps needed to protect Texans.

It’s been almost eight months since Congress has passed any substantial coronavirus relief. Instead of helping to pass aid that food banks and Americans desperately need, Senator Mitch McConnell and some of his fellow Republicans are demanding liability protections for business, which would protect businesses from coronavirus-related lawsuits. This would prevent workers from being able to hold their employers responsible for making them work in hazardous conditions. This demand for liability protections is stalling the relief bill, and the deadline to get this much-needed and overdue bill passed before Christmas is coming soon.

As Abbott and McConnell continue to prioritize their political agendas, millions are going hungry.  To help your fellow Texans, we’ve compiled a list of some of the food banks in Texas that need your help more than ever.