Republicans accuse House of being distracted by impeachment, while hundreds of bills sit on McConnell’s desk 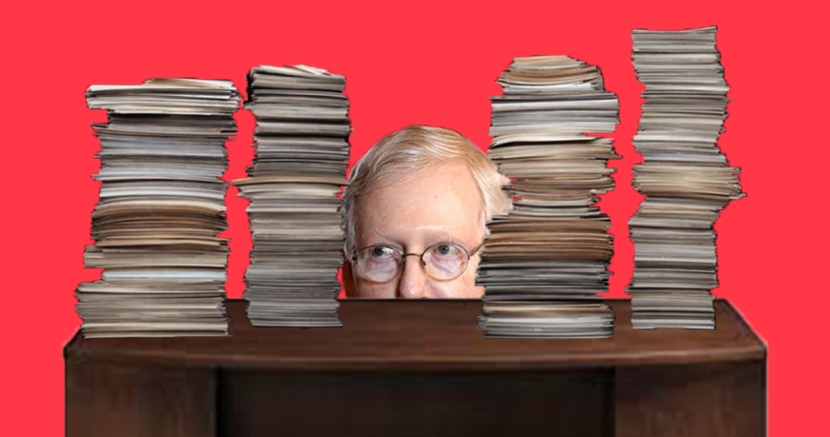 Wesley Story
The “Do Nothing” Republicans think they have Americans fooled. They don’t.

Ever since the impeachment proceedings began, Donald Trump and Republicans in Congress have been accusing Democrats of getting nothing done. They’ve claimed Democrats in the House have been too preoccupied with impeachment, or in other words, holding our corrupt president accountable for betraying his oath to office and violating the U.S. Constitution.

Though a reasonable person would understand the urgency of impeachment and why it should take priority, these complaints by Republicans are still bald-faced lies. Democrats in the House have been multitasking and managed to pass 400 bills, meanwhile, it’s Republicans in the Senate who have “done nothing.”

While Democrats continue to pass meaningful legislation, only 70 bills have been signed into law by Trump. This is a significant slowdown on the Republican side, considering that typically, in a two-year period, Congress will see between 300 and 500 bills passed and signed by any given president.

Senate Majority Leader Mitch McConnell (who will henceforth be referred to as “Turtle” because of the speed in which he’s passed legislation) has been the leader of this do nothing strategy, with support from other Republican Senators like Ted Cruz and John Cornyn.

Turtle has made it his mission to block almost every piece of legislation passed by the now Democratic House, taking pride in his “legislative graveyard” and even calling himself the “grim reaper” of Democratic legislation.

The bills Turtle is ignoring involve important issues such as immigration, health care, survivor safety, and gun violence protection. Instead of focusing on these issues, Republicans in the Senate have spent their time criticizing the House, spreading Russian propaganda, and taking over the courts.

The Senate’s inaction has become a major problem for our communities.

This week, Houston Police Chief Art Acevedo called out Turtle, Cornyn and Cruz by name in a passionate speech he made after losing a fellow officer.

The Act expired in February and the Senate has yet to reenact it, mostly because the National Rifle Association (NRA) opposes provisions in the bill. Currently, the “boyfriend loophole” allows access to guns by physically abusive ex-boyfriends and stalkers with previous convictions, and the new House-passed version would end that.

Essentially, Republicans are refusing to pass the expanded version of the bill because they are more loyal to the NRA than they are to the people they supposedly serve.

"You’re either here for women and children [daughters, sisters] and our aunts, or you’re here for the NRA." ⁠— Houston Police Chief Art Acevedo

In his speech, Acevedo also commented on Republican hypocrisy, saying not to blame the inaction on the impeachment. It’s clear Republicans have the time to pass legislation if they wished, as they continue to confirm judge after judge to the federal bench.

So what’s their excuse?

Democrats in the House have been running a full blown impeachment investigation and they’ve managed to pass 400 pieces of legislation. So what exactly is the Republicans’ excuse?

Truth be told, they don’t have one. This is simply a matter of priorities.

Time and time again, Republicans have shown themselves unwilling to reach across the aisle. Their motto is “party over country,” as they refuse to put partisanship aside to actually serve the American people and protect our democracy.

They refuse to take action when it is necessary, whether that be by passing gun laws to prevent future mass shootings or supporting an impeachment inquiry into a corrupt president. And this refusal to step up will be their downfall. They are choosing to go down with the Trump ship instead of doing what’s right when the moment demands it. And the American people will not forget.

Is there another government shutdown on the horizon?

As we approach the end of the year, the prospect of another government shutdown looms. Congress has just over a week to pass a dozen spending bills to fund the federal government.

But rest assured, if there is a shutdown, Republicans will certainly try to blame it on Democrats and on the impeachment investigation. Don’t be fooled. The ball is in their court and any potential shutdown is due to their inaction and lack of leadership.

If we want to see things get done in 2020, we must elect progressives who will fight for their values, no matter which side is in power.

We must break the stranglehold that Republicans have on our government by electing candidates willing to fight for the people, instead of politicians loyal only to corporations and a corrupt president.