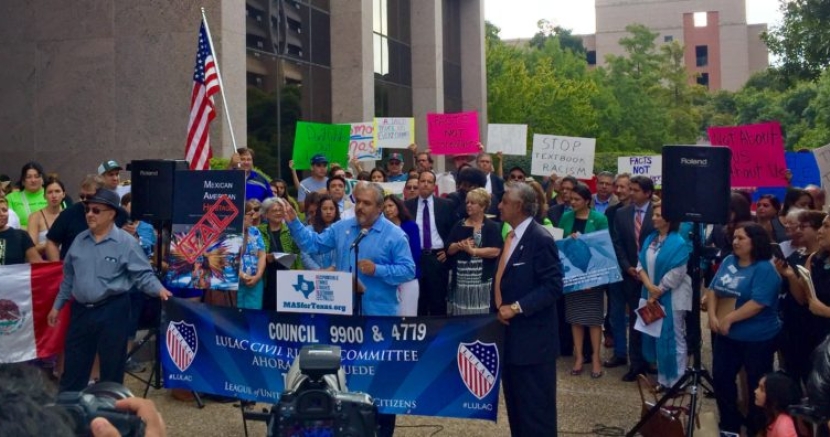 Outrage from students, lawmakers, and activists, led the State Board of Education (SBOE) to hold its first public discussion in regards to the proposed adoption of an inflammatory Mexican-American Heritage textbook last week.

Prior to the discussion, hundreds rallied outside the Texas Education Agency to protest the stereotypes and misinformation of the textbook, holding signs that read “#RejectTheText”. Despite protesters efforts and a recent review by a team of professors and scholars which states that the book contains 141 factual errors in its 507 pages, the #RejectTheText movement remains in opposition by some SBOE members.

State Board of Education member David Bradley, R-Beaumont, says he believes the book is just fine the way it is.

It’s really kind of amusing. The left-leaning, radical Hispanic activists, having pounded the table for special treatment, get approval for a special course that nobody else wanted. Now they don’t like their special textbook? I bet they want everyone to also get an A for just attending? The one thing we can’t fix in this world is unhappy people.

According to the Pew Research Center Latinos comprise of over 10 million of Texas’ population, 87% of which are Mexican. Yet, Latino students rarely see themselves represented in school curriculums, let alone textbooks.

Additionally, for Bradley to be dismissing the errors within the textbook based on the ideology of those who protest it is ignorant and detrimental to learning. In a recently released email to other members of the Board, Bradley suggested skipping the vote entirely:

"A lack of a quorum on [sic] would be nice. Deny the Hispanics a record vote. The book still fails."

He’s so hung up on trying to stick it to “left-leaning, radical Hispanic activists” that he ignores the fact that the textbook is an educational tool--not a political one. And the book, in itself, fails as an educational tool: it is plagued with stereotypes, leading study questions used to criticize the importance of the Chicano movement, and flagrant misinformation. For example, the authors thought it fit to add that:

Stereotypically, Mexicans were viewed as lazy compared to European or American workers ... It was also traditional to skip work on Mondays, and drinking on the job could be a problem.

The horribly written nature of this one-sided book is probably due in part to Board Member Cynthia Dunbar, who refused to hire Mexican-American authors out of fear of “bias.” In any other field this wouldn’t stand; people wouldn’t be calling for physics professors to write economics textbooks out of fear of bias. That’s absurd. Though, somehow, Dunbar believes the bias argument is appropriate for this field of study.

Ironically enough, ethnic studies classes were initially put into Texas schools because of the rising xenophobia of Mexican-Americans. Nonetheless, the Texas School Board used the establishment of these courses, something intended for good, to push their right-leaning agenda through the power of textbooks.