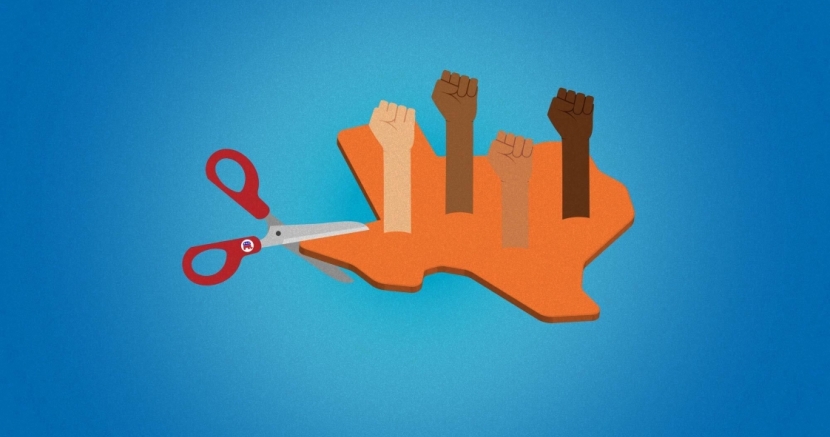 Emily Clark
Texas has a long history of partisan and racial gerrymandering.

Every 10 years, after the U.S. Census, new electoral district lines are drawn to account for population changes. Electoral districts help a state to divide their population into equally sized subgroups which, in turn, can vote for their representative. In theory, this redistricting is meant to ensure better representation in the legislature. In practice, that is often not the case.

That’s where gerrymandering comes in - when politicians find ways to manipulate electoral maps to their advantage.

How do these weird shapes form?

As is often true with states, district maps can be drawn with natural borders, such as rivers and county lines, in mind. In addition, like-minded communities can be grouped together. But since the federal government no longer requires preclearance (more on that below) for states with a history racial discrimination in voting, the Texas legislature is able to draw the lines without initial federal oversight as long as the population is evenly distributed among representatives.

What types of gerrymandering exist?

The two most common terms are “packing” and “cracking.” Packing is when a party puts as many opposing voters as they can into the fewest number of districts. Cracking is when they scatter a community amongst multiple districts so that the community itself has little power in election results.

Racial gerrymandering is still illegal, but maps cannot be struck down by courts until after they are implemented and proven to be unconstitutional, as was found to be the case with some districts in Texas in 2017. Of course, before courts are able to make these rulings, elections pass by and thus exclusionary practices go unchecked. This means the Republican-controlled Texas legislature has been able to perpetuate its power, using redistricting to guarantee votes.

Texas Republicans have been utilizing these tools among urban areas for years and it does not seem to be slowing down. New drafts of district maps look like shattered plates with small cracks stemming from urban centers, dominated by people of color, and spreading to include significantly larger swaths of rural, white Texas. 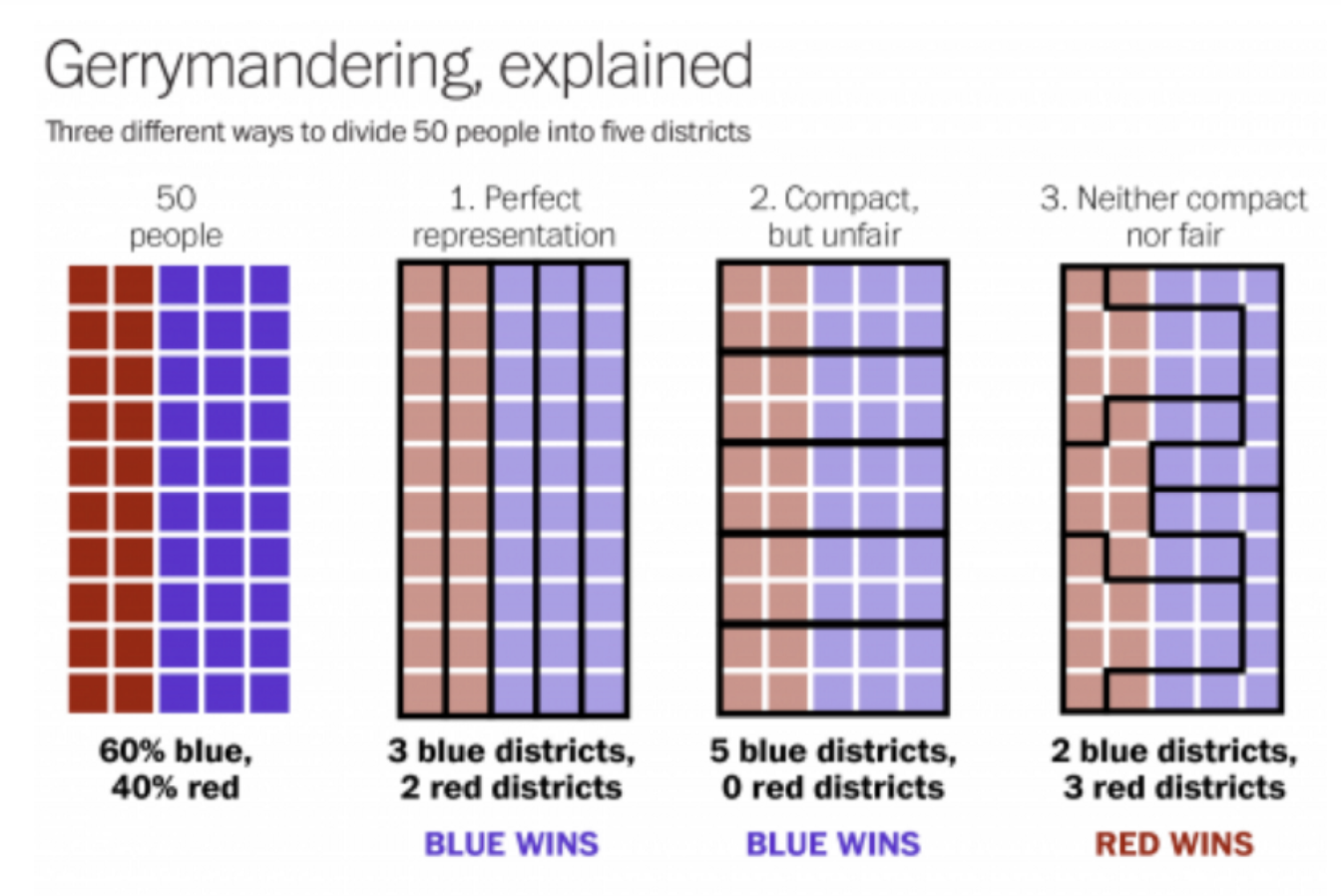 People of color make up a majority of the population growth in Texas, and new districts drawn by the legislature should reflect that reality. With current data and technology, it is possible to see the racial makeup of a state. This could be beneficial in creating district maps that establish equal representation. However, Republicans don’t have a great track record when it comes to this issue. Ten years ago the state was alloted four new congressional seats due to similar population growth in cities and among people of color. But by using racial information to dilute the votes of people of color through cracking and packing, the result was three new districts for conservative politicians representing suburban and rural areas.

What’s worse, they can disregard the previously mentioned natural borders such as rivers and county lines, and instead use “very sophisticated technology gerrymandering down to the last alleyway.”

The most recent map proposed by the Texas Senate is a perfect example of how Republicans are using gerrymandering to entrench their own political power and deny fair representation for people of color.

Case in point: Latino Texans are half a percentage point away from becoming the largest demographic group in our state, yet the Senate’s proposed map would include 20 districts that are majority white and only seven that are majority Hispanic. This is clear discrimination and an attempt to dilute the power of Latino voters in Texas. 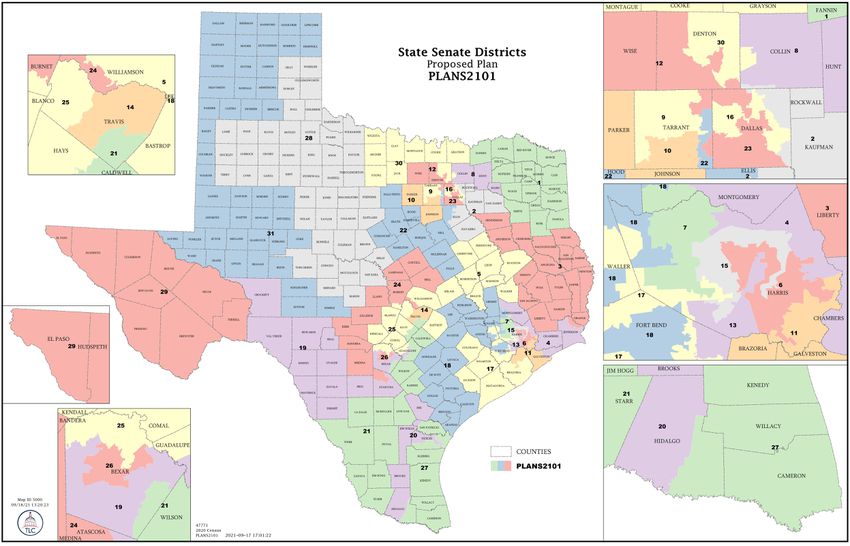 What have the courts ruled previously?

The Texas legislature is no stranger to court challenges, especially when it comes to redistricting. The years-long case that ended in 2017 was only one of many instances of racial gerrymandering in the state. In fact, Texas has had maps rejected by courts in every decade since preclearance was deemed necessary.

A note on preclearance: Prior to 2013, Sections 4 & 5 of the 1965 Voting Rights Act required certain states to submit any major election legislation or redistricting proposals to federal courts before they could be implemented. These state legislatures were (and still are, at least in Texas’ case) historically known to have discriminatory election regulations. They have been using racist scissors to cut district lines and give advantage to Republican dominated legislatures.

So what happened in 2013? In the case Shelby County v. Holder, the Supreme Court ruled that the method the court had been using to determine whether a state needed preclearance was unconstitutional. And since no new method has been introduced, states have not been required to clear voting legislation with the federal government. As a result, people of color have been disenfranchised left and right, whether it be through limited voting periods, requiring and allowing only certain forms of photo identification, or the actual cracking and packing of their communities.

Send us an email with “redistricting 2021” in the subject line and we’ll update this explainer.

How can you get involved?

While gerrymandering makes things difficult, your vote still has an impact, especially locally. The Texas Constitutional Amendment election begins next month and we will have the opportunity to vote on which proposed amendments we think should be added to our state constitution. Register to vote by Oct. 4 and keep an eye out for our voter guide as Election Day approaches!

Since the legislature is back in session, there are still opportunities to testify. Get your word in, let your representatives know that you want your voice to be heard. If you’re able, we encourage you to sign up to testify in support of fair and equitable maps. If you can’t go in-person, please submit a written public comment.

Here’s a helpful piece from the Brennan Center with tips on how to make effective comments at a redistricting hearing.

Right now, protests are happening almost daily at the Capitol. Follow us on Twitter, Facebook, and Instagram for info on the whens, wheres, and whys as well as important updates on what’s happening with the maps.

Oh, and don’t forget to invite your friends and share our content with them! Even the ones in the district across the street.

Sign our petition to generate a message to your state legislators demanding fair and equitable maps!

We need more women in office if our bodies are being discussed. But that requires more women to run. If you need a sign, here it is - just do it. Organizations like Annie’s List, Emily’s List, and Run for Something are here to help.