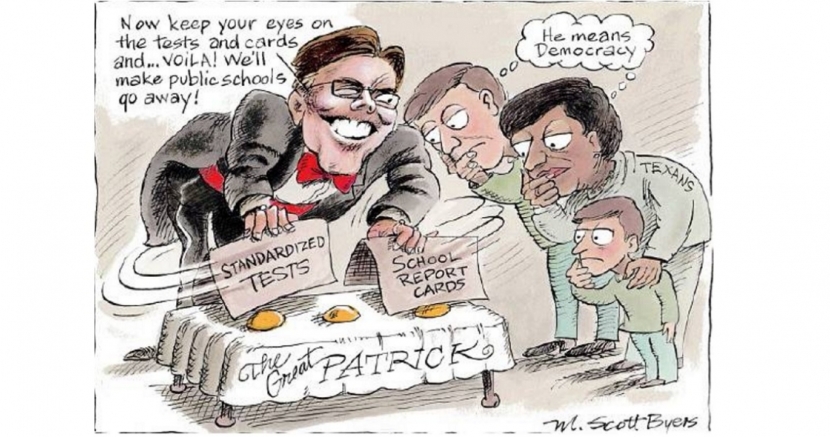 This siphoning of money from public education for all is happening at a time when Texas still falls far short of adequate funding for our children’s education.

Want to know why today’s Trumpian Republicans — Texas Lt. Gov. Dan Patrick among them — think public education is a waste of money? Just listen to President-elect Donald Trump surrogate Scottie Nell Hughes. She cuts to the heart of it. There’s no such thing as facts, Hughes said.

In the Trump era, a Pinocchio nose is the new Washington Monument. It’s growing out of the swamp of corruption Trump once claimed he wanted to drain. Trump & Co. make up their own truths and facts as the circumstances of their power and pocketbooks require. Nice work — if you can get it.

So, the GOP reasons in that context, why in the world would they use taxpayer money to fill our children’s heads full of “facts” that could one day put at risk the fact-free, truth-free plans of the powerful?

As we near the start of the 2017 session of the Texas Legislature, the fate of public education once again hangs in the balance. Patrick — especially Patrick — has long had his sights trained on public ed.

The right’s school-voucher schemes have nothing to do with improving the actual education of children. There are many weapons in the anti-education voucher arsenal, such as vouchers backed with taxpayer money to send kids to private schools and so-called “education savings accounts.” Whatever it’s called, the same dark pea is hidden under all the pretty shells.

Americans once believed that an educated citizenry was the key to democracy. The right begs to disagree. Oh, they want the kids of privilege to be educated — and they want all taxpayers to pay for it. But they see little need to educate the children they are already moving to disenfranchise politically and economically. Educated folk can only cause them trouble.

The school privatization schemes share a great deal with the right’s dreams of privatizing Social Security. Their cronies and contributors see all that public money flowing to public services and they want to get their hands on it. That is the beginning and end of every privatization proposal. The quality of the public service to be distributed is completely irrelevant. To the public they say, give us the money and shut up.

Look at education savings accounts, or ESAs as they are called. To make them seem so acceptable, they already have their own acronym. This is just another way of funneling taxpayer money to the political cronies of state officials. Unsuspecting parents become unwitting bag-men delivering the goods. We pay our taxes. State officials return some of it to parents, who then deliver it to crony-operated private schoolmasters.

This siphoning of money from public education for all is happening at a time when Texas still falls far short of adequate funding for our children’s education.

Trump has chosen Amway heiress Betsy DeVos to be his education secretary. Amway paid a $56 million settlement in a class-action suit that said they operated as an illegal pyramid scheme, among other allegations. (The company admitted to no wrongdoing in the settlement, despite the fine.) DeVos is a longtime advocate of privatized education.

Trump and DeVos, with the help of charlatans like Dan Patrick here in Texas, want to turn public education into a private pyramid scheme: All the money — and all the educating — goes to the top. The rest of the kids? Well, they’ll just have to make do somehow.

Next year, the grade-based “report cards” of individual school campuses will begin. Schools will be given grades of A to F, depending on how students perform on the ridiculous standardized tests. The whole scheme is designed to destroy people’s faith in public education.

So instead of spending the necessary resources to make public education even greater than it is, these rogues take taxpayer money and spend it on public relations campaigns to make public school students and educators look bad. Then, when parents grow alarmed, the rogues show up with a bag of money and say, “Here, take this to that fellow over there. He’ll do a better job educating your children.”

Conveniently for the rogues, some of that taxpayer money will be returned to them by their crony “educators” in the form of campaign contributions, dark money spending and other benefits.

The future of Texas will be less bright because of these schemes. The only winners will be a few rich and powerful who hope they’ve hurt public education enough that the greater taxpaying public will be too innumerate to know how much of their money has been stolen at the expense of their kids.