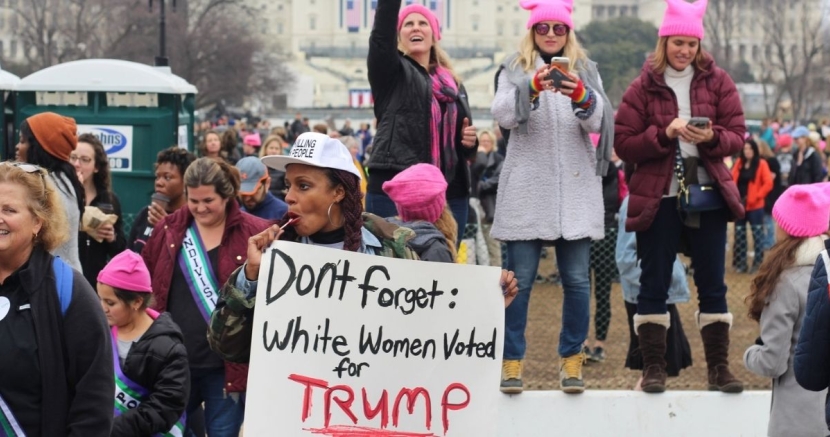 Sydney Greene
It’s a difficult pill to swallow: But for white women who oppose Trump and his heinous policies, your work cannot stop now — and cannot stop for a long time.

Like many other people, I spent the days following the Nov. 3 election glued to my phone screen, refreshing my Twitter feed over and over again, foolishly thinking that my mindless scrolling would make the results come faster. But when the race was called for President-Elect Joe Biden the following Saturday, the pang of relief I felt was soon overwashed by a number that had been echoing inside my head throughout the week: 55 percent.

This number had been etched in my mind after the exit polls on Election night revealed a stinging truth: 55 percent of white women voted for Trump — a two point increase from the 2016 presidential election. A two point increase.

While the truth stung, it wasn’t surprising: as a Black woman, the role white women have played in our political landscape against women of color, and in support of white supremacy, is all too familiar.

In 2016, many wondered: what was the answer to the overwhelming support from white women for Donald Trump? Perhaps one of the reasons could be chalked up to internalized sexism, a subconcious projection of sexism onto ourselves and other women, which explains why Donald Trump — a man who had been accused of sexual assault by more than 20 women and bragged about assaulting women — was able to still get the support of some women. But when gender solidarity fails, white women can do what they have historically been able to do: lean on white supremacy to protect them. White supremacy shows up in a variety of ways in our lives and in the systems we occupy — and while it can look like the white nationalists raging violence throughout in Charlottesville, Virginia in 2017 in response to a confederate statue being removed, it can also look like centering whiteness and its values, privilege, and culture in our systems and spaces. For example, white privilege is a part of white supremacy — when a white person benefits from their white privilege, whether that’s an interaction with a police officer or being listened to over a colleague of color, the presence of that privilege in turn holds up white supremacy.

White women have the ability to weaponize their whiteness in order to uphold racist, anti-Black systems, regardless of political affiliation; for example Susan B. Anthony, an applauded figure of the women’s suffrage movement, unflinchingly left out Black women in the movement to establish voting rights for women. We simply cannot ignore the reality that white women, whether intentional or not, benefit from the power of whiteness. Four years of Donald Trump is a testament to the role of white women in white supremacy: in their support of him, white women were largely left unscathed by the administration’s deeply harmful policies it went on to establish.

As the 2020 election has come and gone, we can easily point to white supremacy for the reason why white women voted for Trump. But what about the ones who didn’t vote for him?

As someone working in the progressive movement, I see a lot of white women get comfortable in their positioning of this work because they’re anti-Trump and support progressive policies. Layla Saad, author of Me and White Supremacy, defines this as white exceptionalism, the idea that as a white person, you believe you’re one of the “good ones” — and in this case, it’s an idea many white progressives tend to adopt when they asses their positioning on the political spectrum. But supporting progressive ideals or voting blue does not absolve you from the racist systems you have the power to uphold, even if you do so unintentionally. While the white women who voted for Trump have to answer for their actions, I’m more focused on the white women who didn’t vote for Trump and how they’re holding themselves and their fellow white women accountable beyond the November election.

It’s clear that women of color — particularly Black women — know how to organize their communities. Over 90 percent or Black women voted for Biden and Harris — not to mention it was the work of Black women like Stacy Abrams and LaTosha Brown in Georgia who flipped the state blue for the first time since 1992 through wide scale voter engagement initiatives. But when white women spent the summer “listening and learning” following the deaths of George Floyd and Breonna Taylor or posting black squares across their Instagram feeds, their efforts didn't seem to change the minds of the 55 percent who sided with white supremacy and bigotry — again.

We cannot fight for gender justice and liberation without fighting for racial justice and Black liberation. We can’t fight for progressive values like abortion access, universal health care, or ending climate change without doing so through a racial justice frame. Simply put: ending racism should never take a backseat in the work that you do. Progressive white women: this work is on you — so let’s get to it.

Sydney Greene is a digital content creator and freelance journalist based in Austin. When she's not managing social media platforms and digital campaigns, Sydney writes about gender, culture, and politics, where her writing has been featured in a variety of publications including Texas Monthly, The Austin Chronicle, Teen Vogue, USA Today, and more.