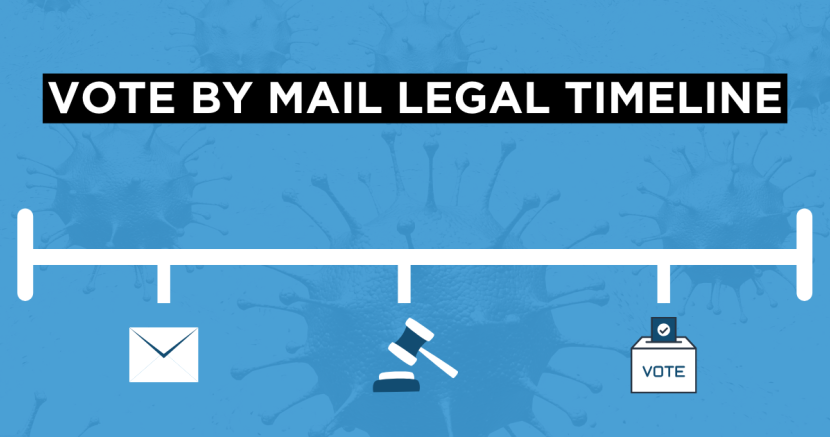 Wesley Story
No Texan should be forced to risk their health and safety in order to vote. Here’s a legal timeline of the 2020 vote by mail litigation in Texas.

Editor’s Note: This article will be updated as new rulings and court decisions are released.

In an effort to protect Texans’ health, safety, and fundamental right to vote, voting rights organizations are fighting to expand access to mail-in voting throughout the state.

Unfortunately, Republican state lawmakers are continuing their voter suppression strategy and have opposed these efforts at every turn. Instead of protecting Texans, conservatives are arguing that Texans should be forced to risk death or illness in order to vote.

As a result, different cases involving vote by mail expansion have been ping ponging in both our state and federal courts and have made it confusing for Texas voters who need clarity about their rights.

Here’s an up-to-date timeline of the different vote by mail cases and rulings that have been made so far:

March 20: Texas Democrats file a lawsuit in Travis County district court asking a judge to declare that Texas election code allows voters to apply for a mail-in ballot under the disability option during the coronavirus pandemic.

Sec. 82.002 of the Texas election code states: “A qualified voter is eligible for early voting by mail if the voter has a sickness or physical condition that prevents the voter from appearing at the polling place on election day without a likelihood of needing personal assistance or of injuring the voter's health.”

April 15: State District Judge Tim Sulak issues a temporary injunction expanding who can qualify for an absentee ballot in the upcoming elections.

May 11: Voting rights advocates file a complaint with the Dallas County district attorney, alleging that Indicted-Attorney General Ken Paxton committed voter fraud in all 254 when he contradicted Sulak’s order because he intentionally misled officials.

“Attorney General Ken Paxton’s letter intentionally misled Texas elections officials about eligibility to vote by mail,” said Kendall Scudder, one of the complainants. “Mail-in ballots aren’t where the election fraud is happening, it’s happening in the office of our indicted attorney general.”

May 13: Paxton files a motion asking the entirely-Republican Texas Supreme Court to weigh in on the vote by mail fight.

May 15: Providing no explanation for their stay, the Texas Supreme Court temporarily blocks the state appeals court’s ruling allowing for expanded vote by mail.

May 27: The Texas Supreme Court rules that a lack of immunity to coronavirus does not qualify a voter to apply for a mail-in ballot. The Court does acknowledge, however, that election officials have no responsibility to question or investigate ballot applications that appear valid.

In the opinion, the court states: “We agree with the State that a voter’s lack of immunity to COVID-19, without more, is not a ‘disability’ as defined by the Election Code. But the State acknowledges that election officials have no responsibility to question or investigate a ballot application that is valid on its face. The decision to apply to vote by mail based on a disability is the voter’s, subject to a correct understanding of the statutory definition of “disability”. Because we are confident that the Clerks and all election officials will comply with the law in good faith, we deny the State’s petition for writ of mandamus.”

April 7: Texas Democrats file a separate lawsuit (case A) in federal court seeking to expand mail-in voting and arguing that by not expanding, the state is imposing unconstitutional and illegal burdens on Texas voters.

The lawsuit states: “To be sure, some number of Texans will need to vote in person in these coming elections, even if mail voting is widely available. But foreclosing this option to millions of members of the electorate simply on account of their age is facially unconstitutional.”

May 12: The League of United Latin American Citizens' national and Texas arms sign on to the Texas Democratic Party’s federal lawsuit (case A) against the state, alleging the age restriction for voting by mail to those 65 and older disproportionately harms Texas Latinos because they tend to be younger in age.

May 19: In a sweeping ruling on the Democrat’s lawsuit (case A), Federal Judge Fred Biery orders that all Texas voters, regardless of age, qualify for mail-in ballots during the coronavirus pandemic.

May 20: A panel of the U.S. 5th Circuit Court of Appeals issues an administrative stay that temporarily blocks vote-by-mail expansion and puts Judge Biery’s order on hold.

June 16: The Texas Democratic Party asks the U.S. Supreme Court to expand access to mail-in voting to all Texas voters.

June 26: The U.S. Supreme Court rejects the Texas Democrats' initial bid to expand voting by mail to all Texas voters during the coronavirus pandemic, but leaves the issue pending for the November election.

For eligible Texas voters who wish to vote by mail, here’s how to do it.