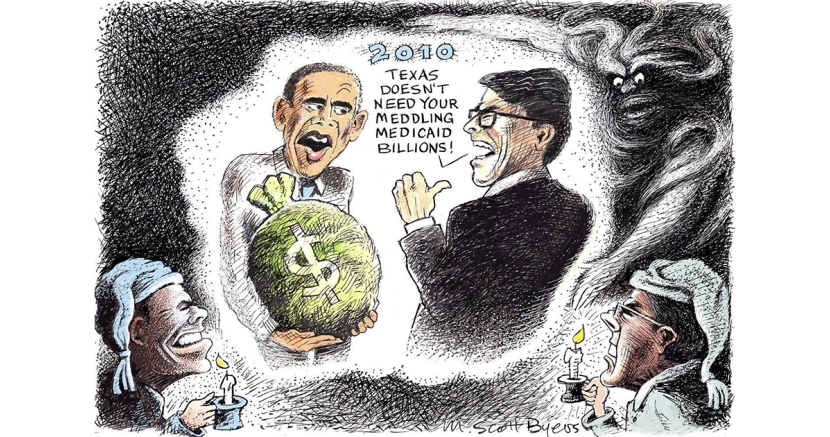 A Medicaid Carol: A Ghost Story for Christmas

Illustration by M. Scott Byers
With the holidays upon us, this is a good moment to sit down by a cozy fire to read an updated take on Charles Dickens’ “A Christmas Carol.”

Thanksgiving has come and gone and the holidays are upon us. This is a good moment to sit down by a cozy fire to read an updated take on Charles Dickens’ “A Christmas Carol.”

The tale will focus on just one of the deprivations suffered by many Texans at the hands of today’s Gang of Scrooges, otherwise known as the Texas Republican Party: the denial of health care to needy Texans by the Gang’s refusal to accept available federal dollars to expand Medicaid.

We begin as Dickens began, with a visit from a ghost, in this case the Ghost of Health Care Past. A Spirit Being — it looks a little like a wispy cloud with sad eyes — visits our Republican state leaders as they sleep, one by one, Gov. Greg Abbott, Lt. Gov. Dan Patrick among them.

Each of them awakens to the Spirit circling over their beds and whistling Grieg’s “Hall of the Mountain King.” The Spirit leads them to visions of the past, where the wealthy and upper middle class enjoy unfettered access to the best medical care possible. These leaders and their friends laugh and shout with glee in the halls of hospitals to which only they have the keys.

The ghost forces the leaders to visit each of the 5 million Texans without health insurance. More than one million of them would be eligible for Medicaid if Texas leaders would accept available federal dollars to expand the healthcare program.

Medicaid expansion was part of 2010′s Affordable Care Act. About 10 million Americans gained health coverage through the Act’s Medicaid expansion. No Texans did, because then-Gov. Rick Perry, and later Abbott and others, refused to accept the money.

On the third night, the Ghost of Health Care Future tortured the Republican villains with visions of their own futures. Included in the tour were visits to Kentucky, where a Democrat just beat the incumbent Republican with a promise to protect Medicaid expansion, and Louisiana, where a Republican challenger for governor lost after calling to freeze enrollment.

The eyes of Texas officials grow wide as they see the tide has turned. Their victims have rebelled and tossed them and their political progeny from office. Their political lives are embalmed in articles with titles like, “The Deadly Shame of History: Health Care Deniers Suffer Eternal Ignominy.”

Local taxpayers celebrate as federal Medicaid dollars relieve them of the unnecessary hospital district tax burden placed on them by the Republican culprits. Millions of newly healthy children excel in school. The elderly find new dignity and longer, happier lives as they enjoy health care once denied them.

Also, years of environmental deregulation have come to an end. Deadly toxins disappear from the air in Beaumont and Houston. Strict new clean water protections divert petrochemical pipelines away from water sources. Healthier Texans lower demand for critical care, so the cost of health care drops for all.

Left back in their homes by the ghost, Abbott, Patrick and others wipe the cold sweat from their brows as they toss and turn in the beds they’ve made for themselves.