Malice is the motive for overturning Obamacare 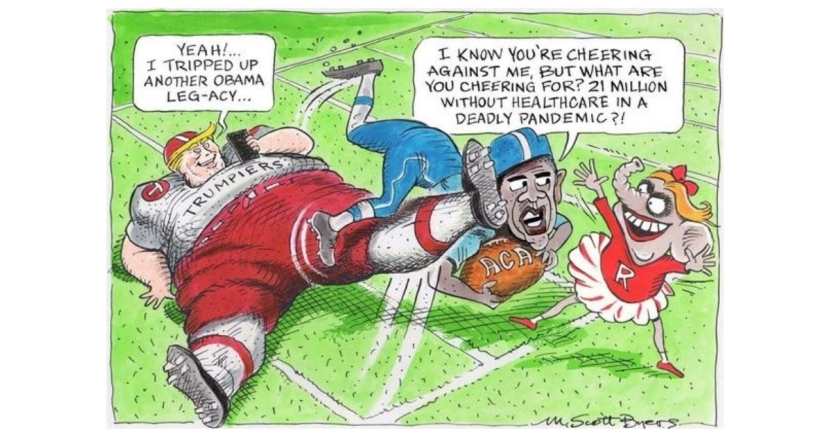 Glenn W. Smith
It doesn’t seem to bother Republicans at all that tens of millions of Americans will lose their coverage or pay even more for it.

In several studies summed up recently by the New York Times, 133 million Americans with pre-existing conditions could find themselves unable to buy health insurance, or paying higher premiums for it, if the U.S. Supreme Court overturns the Affordable Care Act. Those suffering long-term effects from COVID-19 should be added to the toll.

According to the Times, 21 million Americans now covered through the ACA or the recent expansion of Medicaid could lose their coverage. Others who could suffer: 165 million who don’t face caps on insurance claims under ACA; 60 million Medicare participants who could face higher costs and pay more for prescription drugs; 800,000 getting treatment for opioid addiction.

What, besides malice, could be the motive of Republicans like Texas Attorney General Ken Paxton, who brought the lawsuit against the ACA that will be argued before the Supreme Court on Nov. 10?

It’s true that President Donald Trump and other Republican leaders are claiming they will protect coverage for pre-existing conditions. They don’t say how they’ll do it, though, because ending the coverage is not a bug — it’s a feature of ACA repeal. It will improve the bottom lines of their donors in the insurance industry.

If insurance coverage is the ticket one must have to get reasonable health care in America, why would anyone want to take the tickets away from Americans who earned them and came by them under what is now the law of the land?

Maybe it is just ideology, a conviction on the right that unnecessary deaths and other harmful consequences of the “market” are worth it to those who survive and flourish. This is hard to accept because it comes awfully close to approving of the sacrifice of American lives on behalf of an abstract ideology. Call it “situational Darwinism,” a useful concept to the free marketers but anathema to many on the religious right who support them.

I doubt most opponents of Obamacare would say it is malice that drives them. Most folks don’t want others to suffer. Maybe they believe that the beneficiaries of Obamacare are getting something they haven’t earned and don’t deserve. Some just believe Republican leaders when they say they have a better plan. They haven’t had time to think it through for themselves and depend upon those they’ve chosen to lead to do the right thing.

No, it is the leadership on the right who must accept the blame. We have seen that Trump has tried every way he can to erase every accomplishment of the Obama administration. Repeal of Obamacare is another instance, and Trump wears the malice on his sleeve.

Paxton and Texas Gov. Greg Abbott share the malice and are currying favor with Trump and other national Republicans gleeful at the prospect of killing Obama’s greatest achievement while increasing the profits of their donors. It doesn’t seem to bother them at all that tens of millions of Americans will lose their coverage or pay even more for it.