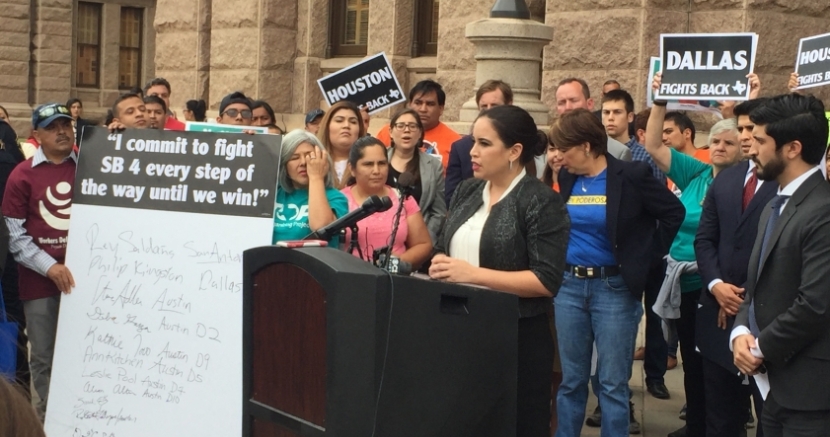 Local Leaders From Across Texas Launch “Summer of Resistance”

"Summer of Resistance” is a coordinated effort to fight back against the Texas GOP’s racist, anti-immigrant “show me your papers” law, SB4.

A broad coalition of community leaders, grassroots organizations, local and state elected officials from cities across the state — Austin, San Antonio, Dallas, Houston, El Paso, and the Rio Grande Valley — have launched the “Summer of Resistance,” supporting coordinated litigation and resistance against this immoral and unconstitutional policy.

In a press conference on the steps of the State Capitol, leaders of the “Summer of Resistance” promised more legal challenges to the GOP’s racist and unconstitutional “papers please” law signed by Governor Greg Abbott in May.

Austin City Council Member Greg Casar is one of the other coalition members publicly opposing SB4, encouraging his colleagues across the state to stand in solidarity with the communities they serve:

“As I took my oath of office to serve on the Austin City Council, I vowed to ‘protect, preserve, and defend the constitution of the United States. That includes fighting unconstitutional mandates by Governor Greg Abbott himself. I believe my colleagues on the Austin City Council, and in many other municipalities across this state, will reject anti-immigrant coercion by our state leaders and join together in litigation against SB 4.”

Sweeping ICE raids are striking fear and insecurity in Texans, affecting many communities like San Antonio Council Member Rey Saldaña’s. He emphasized his duty to protect and defend the the vulnerable Texans targeted by this legislation:

“My conscience will not allow me to stand silently as families are torn apart, communities live in fear, and public trust in law enforcement is eroded. The time to take action is now, and the first step in a journey of resistance is defeating an unconstitutional law.”

"Governor Abbott continues to demonize the Latino immigrant community for political gain. Just as federal judges struck down intentionally discriminatory redistricting and photo ID schemes pushed by Abbott, the MALC will once again hold the State of Texas accountable in court."

Greg Abbott made headlines with one of his first attacks in the name of SB4, when he promised to “hammer Travis County” after Travis County Sheriff, Sally Hernandez refused to turn the county police force into Trump’s deportation agents. In a preemptive attempt to prove the constitutionality of SB4, Attorney General Ken Paxton filed a lawsuit. Travis County Judge Sarah Exkhardt is not intimidated by the actions of the governor or attorney general.

“Travis County is a safe and law-abiding community. I am gravely concerned by Attorney General Paxton’s demand that we abide by a law that is not yet in effect and that we believe poses a serious threat to the constitutional rights and obligations of individuals and their government. Travis County therefore welcomes Paxton’s rush to the federal court where these constitutional questions can be answered through a reasoned examination of facts and law. Our job is to defend the interests and values of the people of Travis County.”

The “Summer of Resistance” will continue in opposition to the anti-immigrant law every step of the way. The coalition urges Texans to join the fight against hateful legislation and protect the community values that make Texas strong.