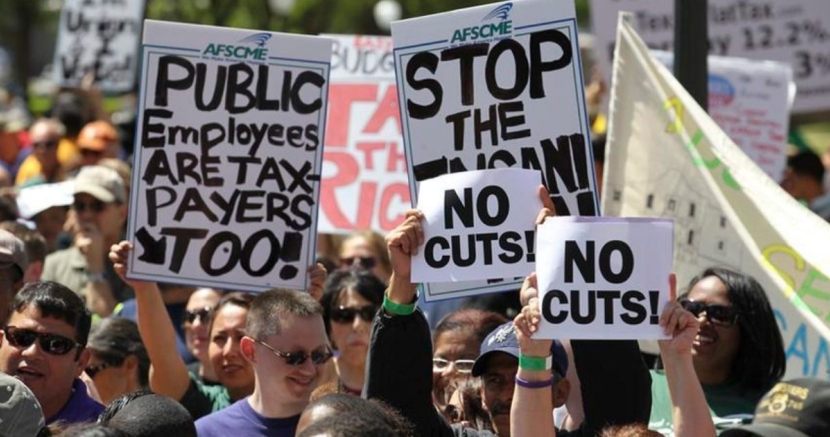 In the early 20th century, the rapid industrialization of the United States produced unbelievable amounts of wealth for businesses and industrialists. This era, known as the Gilded Age, saw the rapid growth of the U.S. and global economy. Businesses saw little regulation from the federal government, so while power and wealth were being concentrated in the hands of a few men, workers had to endure unhealthy and dangerous working conditions, poverty wages, and lack of benefits. Wages were so low, children as young as five often had to find employment to help their families provide.

These bleak conditions led many to join unions and other labor organizations. This influx of unionized workers correlated with improved working conditions, pay, and benefits. Labor activists and unions won the 40-hour work-week and made it standard, they fought for unemployment benefits, and federal jobs guarantees.

While unions made important gains within their workplaces, the results were not the same for workers everywhere. For example, in 1921, West Virginia coal miners began to organize in anti-union towns. Instead of listening to the demands of the workers, the bosses of the coal companies that controlled these towns hired private law enforcement known as ‘pinkertons’ to inflict violence on the striking workers. These acts of violence against striking workers were not uncommon, but they also weren’t enough to deter the labor movement, and permanent victories were still achieved.

Unions are essential to our labor force, and they help to balance interests between workers and their employers. American workers throughout history, including many key Texas leaders, gave their sweat, blood, and tears fighting for a better future. Unfortunately, many of the gains unions won in the early 20th century were rolled back under Reagan and subsequent presidents. This pattern continues today as Republicans pass anti-union laws and conservative courts uphold them.

Many recent attempts to unionize corporate workplaces have failed due to hostile laws and the broad legal latitude given to businesses to counter unionization, despite that it is official U.S. policy to encourage it. Some examples of this include Amazon as well as efforts to unionize newsrooms across the country. These fights also demonstrate how far some employers are willing to go to squelch worker organizing, with little consequence.

According to the Economic Policy Institute, CEO compensation has grown 940% since 1978. Meanwhile, the de-unionization of the country has led to lower wages and worse benefits for your average worker. According to Forbes, the top 1% Of U.S. households hold 15 times more wealth than the bottom 50% combined. In the richest country on Earth, there’s absolutely no reason why anyone should be forced to live in poverty or struggle with homelessness. We can and must do better.

We celebrate Labor Day to honor the workers and labor activists who came before us, but we should also celebrate Labor Day to educate Americans about its significance and the importance of unions. Unions make genuine improvements in the lives of workers, and we need them now more than ever to rebalance the distribution of wealth and power in our society so that every person has the means to survive and thrive.

Progress Texas Podcast: Whose Running for Governor?
3 days ago

92% of voters concerned about future of Texas, majority think state headed in wrong direction
4 days ago

Latinos can win Texas with people power, with gente power
4 days ago