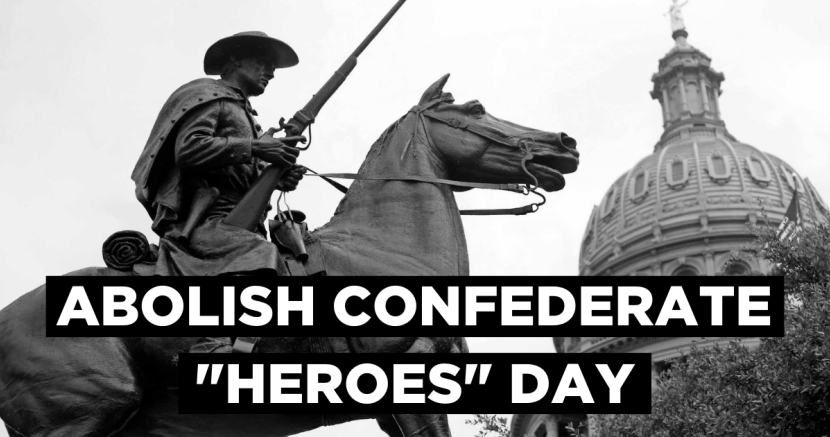 On January 18th, Texans celebrated Martin Luther King Jr. Day, a remembrance of the country’s most famous activist for racial equality and civil rights. And on January 20th, Senator Kamala Harris will be inaugurated as the country’s first Black female vice-president. But in between on January 19th, the state of Texas celebrates Confederate Heroes day, an official state holiday honoring Confederate traitors.

After Martin Luther King Jr.’s assassination in 1968, civil rights activists began campaigning for a national federal holiday in his honor. As those demands became louder and harder to ignore, racist Texas lawmakers responded — not by creating MLK day, but by creating a new holiday, Confederate Heroes Day.

The holiday “celebrates” Robert E. Lee, Jefferson Davis, and other Confederate traitors, racists who fought against the United States for the right to own Black Americans as slaves. The holiday takes place four days after Martin Luther King Jr.’s birthday, and disgustingly, sometimes falls on MLK day.

It shouldn’t need to be said, but Confederate soldiers are racist, indefensible, and insurrectionist traitors, not heroes. They didn’t fight for state’s rights, they fought for the right to hold Black people as property. Confederate Heroes Day is a disgusting reminder of the treatment that Black Texans faced, and still face, as a result of systemic racism in this country.

While Black legislators have tried to get rid of Confederate Heroes day in the past, their efforts haven’t been successful. In the 2019 Texas legislative session, a bill to eliminate the holiday died in the State Affairs Committee, then chaired by current Texas House speaker Dade Phelan. Republican legislators have opposed the bill in the past, with some claiming that we should celebrate the Confederate traitors as honorable soldiers.

However, the Black Lives Matter protests last summer have brought racial injustice into the forefront of the national conversation. As Rep. Nicole Collier, chairwoman of the Texas Legislative Black Caucus, told the Texas Tribune,

“The killing of George Floyd, a Texan, and the killing of Atatiana Jefferson, another Texan, at the hands of law enforcement, certainly do underscore the importance of removing a day of remembrance that brings to the mind slavery and oppression.”

State Representative Jarvis Johnson, the author of the 2019 legislation, is filing the bill again this year. This time, he believes it has a higher chance of passing. Rep. Johnson wrote in a 2019 op-ed that Confederate Heroes Day serves as a reminder of the brutality his family faced due to slavery, saying,

“Confederate monuments, memorials and holidays honoring ‘heroes’ show how this part of U.S. history has been sanitized and whitewashed. When I look at monuments honoring the Confederacy, I see a painful depiction of the brutality that created my family line … Though leaders such as Lee may have fought nobly in a brutal war, it’s not possible for me to separate that he not only was fighting on the side that defended slavery, but he owned slaves himself. Owning slaves was inhumane, and it’s a shameful part of America’s past, not a noble quality.”

This year’s legislative session comes after the armed insurrection in the U.S. Capitol, led by white supremacists who proudly carried the Confederate flag into the building for the first time. The Confederates are not just our history, they’re our present, and continuing to celebrate Confederate Heroes Day serves as an unacceptable endorsement of racism and white supremacy.

It’s time to get rid of Confederate Heroes Day. You can contact your state representative and demand that they support HB 36 and HB 219 to eliminate the holiday.

And you can continue to put pressure on lawmakers by talking to your friends and family about this, and spreading awareness on social media everyday.