It’s time for the Confederates at the Capitol to go 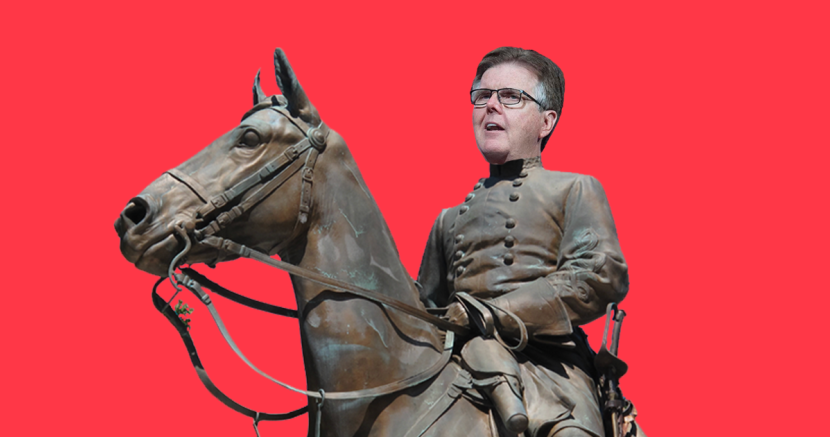 Abby Springs
Let’s honor Black Texans, not those who fought to take their rights away.

In 2016, the Texas Legislative Black Caucus unveiled the African-American History Memorial at the Texas State Capitol, the culmination of a 20-year effort to memorialize Black history on Capitol grounds. The 30-foot long memorial captures the Black experience in Texas over 400 years, a large monument to the massive contributions of Black Texans over the last four centuries.

But on the same South lawn, just a few hundred feet away, also stands the Confederate Soldiers Monument, which memorializes the very people who fought to keep Black Texans as slaves.

Texas legislators are calling for change. This July, a group of eight lawmakers in the Texas House and Senate signed a letter calling for the removal of Confederate monuments on the State Capitol grounds. These monuments include portraits and statues of Confederate leaders, who fought in the Civil War for the right to uphold slavery and racial discrimination.

Honored to join this diverse coalition of leaders to acknowledge the truth! Confederate monuments honor those who fought for the enslavement and degradation of Black people. In 2020, how can Black Texans feel truly welcomed on our Capitol grounds with such disrespectful imagery? https://t.co/HtOE9VaJna

Unsurprisingly, our Lt. Governor Dan Patrick responded with true Trumpian rhetoric, ignoring history and blaming the existence of the Confederate monuments on Democrats. He refused to address whether or not he believed the monuments should come down.

But whether or not Patrick agrees, it’s long past time to take down these monuments. The State Capitol is a place for all Texans, of all races. Instead, these portraits and statues send the message that Texans of color, especially Black Texans, still aren’t fully welcome.

"When you dig deeper, what (Confederates) fought for was slavery and dehumanizing people," said Rep. Donna Howard to Community Impact Newspaper. "The descendants of the slaves have to look at the same commemorative statues and plaques, knowing their ancestors had been persecuted by those very people."

No one should have to visit the State Capitol only to see the faces of those who hated people with their skin color. A portrait or a statue should be reserved for those who deserve honoring -- and Confederate soldiers don’t deserve anything close to celebration.

Some argue that the Confederate monument statues have historical value, but these statues don’t represent Texas history. Some falsely state that the Confederates fought for state’s rights instead of slavery, but as former Texas legislators Republican Joe Straus and Democrat Rodney Ellis point out, that is not history, it’s mythology. And many of these monuments were erected in the 1960s, as a racist response to the Civil Rights Movement. It’s clear that these monuments promote racism and discrimination, not education.

Taking down these statues is possible

Texans across the state agree that Confederate monuments need to come down. A majority of Texans support removing the statues, with 20% wanting to remove them entirely and 32% wanting to move them to a museum. And among young people, 73% support removal, proving that taking these monuments down is only a matter of time.

But Texans shouldn’t have to wait. After the deaths of George Floyd, Ahmaud Arbery, and other Black victims of police violence, we’re finally confronting racism in our workplaces, neighborhoods, and communities. Statues across the state are coming down, in Dallas, Lockhart, Bastrop, and more. It’s time to confront the racism that hangs on the walls of the State Capitol and stands on the Capitol lawn.

We’re much more likely to get these monuments taken down, however, if we have a Democratic Texas House next year. This November could mean the first time we flip the Texas House in over 17 years, which could have huge implications for Texans across the state. That power lies in us -- make sure you’re registered to vote and support progressive candidates willing to stand up against racism.

To support the effort to remove the statues, Rep. Rafael Anchía recommends passing resolutions in your community organizations supporting the change. You can also send resolutions and letters to Texas House and Senate committees, as well as call your representatives and tell them to sign on.

People have been calling me and asking me what they can do to help this effort. Here are a couple things you can do:

Celebrating Texans of color doesn’t just have to mean removing racist statues. It can also mean erecting new ones in their place. Bringing down Confederate monuments will leave lots of empty picture frames and statue pedestals, ones that can be replaced with trailblazing and marginalized Texans who succeeded against the odds.

Instead of Dick Dowling, a Confederate officer, we can hang a portrait of Bessie Coleman, a native Texan and the first Black woman to hold a pilot’s license. Instead of Albert Sidney Johnson, another Confederate, let’s celebrate George Ruby, who led Reconstruction efforts in the post-Civil War era. Instead of Jefferson Davis, the president of the Confederacy who never lived in Texas, we can honor Senator Barbara Jordan, who was the first Black Texan elected to the Texas Senate.

Every day, Texas is becoming more diverse and more progressive. Our monuments should reflect our community, especially in the State Capitol. Whether we move them to a museum or get rid of them entirely, it’s time to take down Confederate statues from the Capitol grounds.