If you think the public schools won't go away, think again. 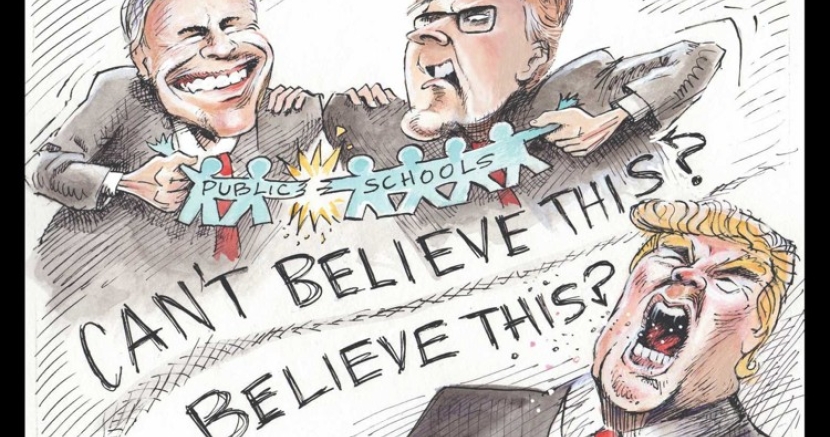 Image Credit
Illustration by M. Scott Byers
Glenn W. Smith
All the laws and all the court orders in our state’s inglorious history have failed to fix school finance

We should shut down our public K-12 schools and publicly funded colleges because they are white elephants that cost more than they’re worth. That’s the conclusion of a new article in Reason magazine, a publication backed by right-wing donor-angels David and Charles Koch.

The Koch Brothers donate lavishly to right-wing Texas politicians and so-called “think tanks.” Just how much, in the age of dark money, is hard to know. Let’s estimate the figure at, say, more than all the families of the average Texas public elementary school will earn and spend in a lifetime. That ought to be close.

If you’re asking yourself how those in the cubicles of a “think tank” could be against public institutions that teach thinking, well, that’s a darned good question. Does “pulling up the ladder” once you get economically comfy come close to an answer?

Anyway, the eye-glazing subject of public school finance is in the news again, where it has been since there have been things called news and public schools because all the laws and all the court orders in our state’s inglorious history of thinking have failed to fix it.

In 2017, the Republican-controlled Texas Legislature appointed another special commission to examine public school finance. Of course, Gov. Greg Abbott chose a home-schooling parent, Scott Brister, to chair the thing. This is a little like putting a polyester magnate in charge of the cotton crop.

Currently, lawmakers are balancing the state budget by skimming $2 billion or so in local school taxes that move through state for redistribution to property-poor districts. Then, these same lawmakers wag their sticky fingers at local school officials for their high property taxes — which the lawmakers are stealing from you in the name of fiscal conservatism.

This, I suppose is what is called “thinking.” Understanding it might help explain the actions of these anti-education con artists. If our public schools and universities were allowed to teach us to think critically and see through the scam, why, we just might put an end to it.

Which brings us back to the article in Reason magazine. It’s authored by Bryan Caplan, a professor at a public research university! I’m sure he’s ashamed of the affiliation, given his low opinion of public universities. Caplan argues bluntly that publicly financed education is not worth its costs to society.

This “does not mean schools don’t improve their students,” Caplan writes. “They do. But it’s a long walk for a short drink. As a rule, society fails to earn back what it spends putting kids through high school, college, or beyond. At the current margin, education’s numerous social benefits pale before its staggering social cost.”

To reach this conclusion, Caplan must erase human beings from his spreadsheet. His calculations involve only money.

When he does consider actual human people, he divides us into various groups of talented and untalented, high ability and low ability. This, my fellow humans, sorts us into permanent castes — as if we are marked from birth for failure or success.

Caplan and his fellow travelers would seem to have no use for the Old Testament Prophets, Jesus, Buddha, Socrates, Shakespeare, Jefferson, Dewey and the rest of them. These troublemakers believed there was nothing we couldn’t overcome — that we have the power to shape our lives. Somebody should have shown them a spreadsheet.

While he doesn’t believe it’s worth it to pay for anyone’s education, it makes slightly more sense to Caplan that we educate the born Brahmins among us. For the Untouchables, well, he has no answer.

These are the views of a published “authority” on education and the economy in the journal financed by the Kochs, the same people more or less financing more or less most of the far-right lawmakers in Texas. Is the picture clear?

The intellectual and economic power behind the extremist movement of Gov. Greg Abbott, Lt. Gov. Dan Patrick and their henchmen advocates for the elimination of public education. They hide this goal behind smoky talk of vouchers, charter schools and such.

For those of you who believe they’ll never succeed at eliminating public education, never say never. The strange and dangerous can happen. Donald Trump is president, for instance.