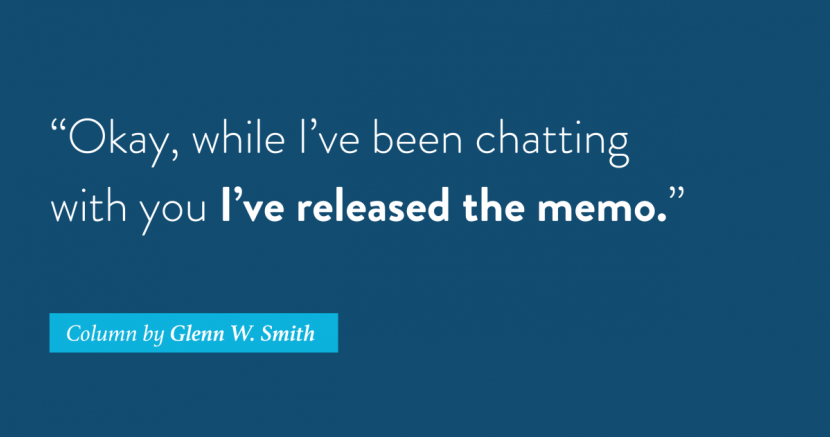 I am America, and I Have a Secret Memo Right Here in My Coat Pocket

I have a secret memo in my pocket that details all the disgraceful things my opponents and detractors are engaged in. They should be ashamed of themselves.

I mean, people should be ashamed. We’ll see what happens. A lot of people are outraged, and they should be outraged.

I know that context and opposing views are not included in my memo. It is full of powerful accusations, and my adversaries don’t deserve the opportunity to defend themselves against these allegations because that would require the declassification of other information which I won’t allow because it distracts from the accusations in my memo. You know, the memo here in my coat pocket.

I learned how to do this from Vladimir Putin. He is a genius at forcing law enforcement to protect him and imprison or disappear his opponents. A genius. A smart guy. We could learn a lot from him. You oughta check him out.

He said I was a smart guy, and that’ll give you an idea of how smart he is. Real smart. He recognizes a fellow stable genius when he sees one.

So, look out FBI. I’m going to expand Guantanamo. Plenty of room for those who aren’t loyal to me.

It’s not just that they aren’t loyal. They are out to get me. They are after me. I see them hiding in the corners and behind the curtains. They’ve bugged my phones. Helicopters are always overhead. I know they are my helicopters, but still. Black helicopters. Can you imagine?

Wait until you read the memo, the one I have in my pocket, it includes names, names of those people hiding behind my curtains, people out to get me. They should be ashamed.

America won’t stand for it. Wait’ll they read this memo. Just wait until Fox News cherry picks the really cool stuff and reports it. Torches and pitchforks I tell you. They’ll be coming after you. You’ll be glad I’ve called you out so you have time to escape the wrath of my supporters.

Okay, while I’ve been chatting with you I’ve released the memo, the one that was hidden in my coat pocket.

They’d better watch out. We Americans do not like those people we find are not with us, not loyal to us, not part of America.

Read my memo. Fly it high! Light your torches. Get your pitchforks.

And remember, I am America.

Yours, America (you know, Donald Trump).