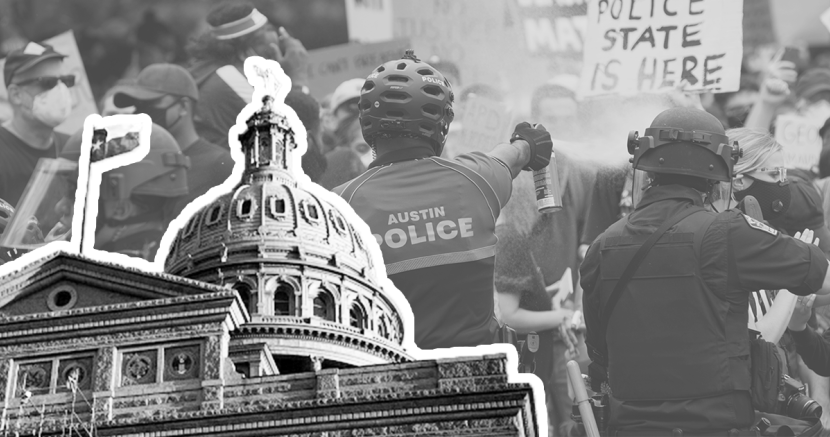 Abby Springs and Wesley Story
Texas has a shameful history of police brutality, and unsurprisingly, our laws often prioritize police over the Texans they’re supposed to protect.

Over the last week, we’ve seen protests across the country and across the world. In every U.S. state, protesters have come together to stand up against police brutality and call for an end to the killing of Black people at the hands of law enforcement. Here in Texas, we’ve seen heroic acts of courage from protesters, and we’ve witnessed shameful acts of violence from those sworn to protect us.

What we haven't seen, however, is a legislative response.

In his press conference on Tuesday, Gov. Greg Abbott said he will begin a “dialogue” with Texas legislators, although he didn’t mention which issues he would support. Texans need action, not empty words. We’ve had days of protests across the country — it’s time for our legislators to step up and support specific policies, many of which have already been introduced in previous sessions.

Texas has a shameful history of police brutality, and unsurprisingly, our laws often prioritize police over the Texans they’re supposed to protect.

Here are a few legal protections that allow police to continue abusing their power. These are laws that legislators must remove to begin fixing Texas’ broken policing system:

When police officers violate our rights, they have a special legal doctrine that protects them from being held accountable called qualified immunity. This legal principle means that government officials cannot be sued for violating constitutional and civil rights, unless those rights are “clearly established.”

Essentially, the victim must prove in court that the officer violated their rights and that the conduct has been found unconstitutional in other cases. Last February, a Texas prison guard who unnecessarily pepper sprayed an inmate was granted qualified immunity because similar cases only discussed unnecessary tasings.

The standard is almost impossible to overcome, and it means that thousands of victims of police brutality never get justice.

So far, Rep. Justin Amash from Michigan has introduced a bill to end qualified immunity, and Sen. Cory Booker is working on legislation to tackle the problem. The Texas congressional delegation must vote to end this legal loophole, which already has bipartisan support. Anything else is denying justice to the thousands of Black Texans who experience police violence every year.

Even when police officers are fired for misconduct, in Texas, they’re rarely ever punished. Texas allows for fired officers to appeal any action taken against them, and the process frequently works out in their favor.

In San Antonio, officers are reinstated two-thirds of the time, and they often receive back pay for their time out of work. So far, this has included an officer who used the n-word when arresting a black suspect and one who gave a homeless man a sandwich filled with dog feces.

When negotiating police union contracts, city officials must be more critical of the privileges given to officers fired for misconduct. Cities have the ability to vote down these contracts — Austin did it for the first time in 2017. We need local officials who stand up to police unions to make real reform, and it’s on us to only support local candidates who promise to do so.

In 2017, Governor Abbott enacted SB4, an anti-immigrant law that was met with extreme opposition during the 2017 Texas legislative session. The law, according to a lawsuit against it, “invites racial profiling, permitting officers to demand 'papers' from virtually any person in Texas at any time.”

Abbott not only signed the bill into law, but strongly advocated for it, and made statements in support of SB4 that were blatantly untrue. Recently, in response to the murder of George Floyd, Texas Democratic Congressman Joaquin Castro called Abbott “part of the problem” for enacting SB4 into law, and we agree.

SB4 is harmful to people of color in our state and gives police an excuse for racial profiling. Instead of giving law enforcement tools to justify their racism, SB4 must be removed, and we must hold police accountable for their racism.

In addition to the laws we need to remove, there are others that should be added to protect Texans and hold the police accountable:

Under Texas law, police officers are not required to turn over any evidence found in their investigation, meaning that police officers can choose to hold back anything they want with no punishment.

Texas Sen. Royce West proposed a bill in 2019 (SB 2114) to help change this, but it never reached the House. The proposed law would have legally mandated that the state law enforcement agency submit a written sworn statement, swearing that “all exculpatory, impeaching, or mitigating evidence” has been turned over to the prosecutor.

This bill could go even further than requiring transparency when lawsuits are involved, however, and require that law enforcement is more transparent about evidence with the public as well. For example, even with continued calls from activists, Houston police have refused to release video from six deadly shooting incidents over the last few weeks. Even if there is nothing to hide, Houston police should be required to release this evidence so that the public can decide for themselves and determine whether or not legal action is necessary. If the police are able to sit on this type of evidence and make decisions about whether or not to turn it over, then how can the public trust that they’re not hiding illegal or incriminating information?

Current laws in Texas fail to protect against unnecessary killings by police officers, especially for Black Texans. Officers can use deadly force even when alternatives are available.

It’s unacceptable that police officers here in Texas are allowed to legally get away with killing someone, even when they didn’t have to. Texas needs to update its use-of-force laws to reduce and prevent killings by police. Law enforcement should be required to use every available alternative before using deadly force. Here’s an example of a bill introduced in California that addresses this same issue.

While these are just a few laws that should be added or removed, there are many more reforms and changes that need to be made to our broken police system. Be sure to follow Black-led organizations in Texas and continue uplifting Black voices leading the fight against police brutality.

by
Abby Springs and Wesley Story