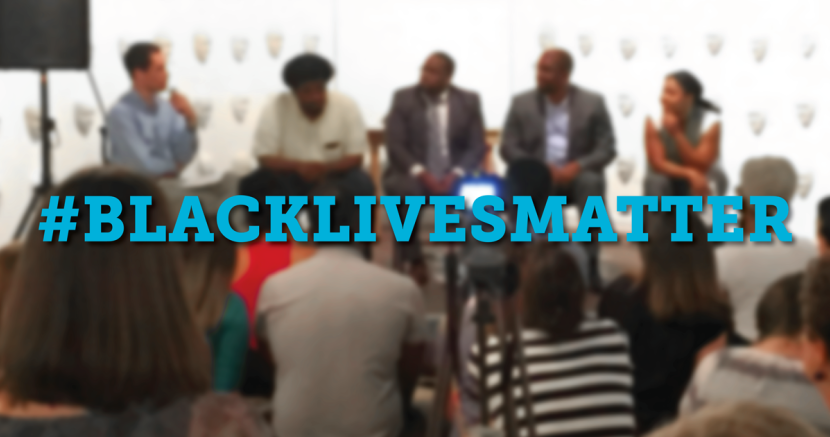 Progress Texas
The #BlackLivesMatter movement is sharing tactics from all over the country. But at the end of the day, it’s really community-focused problems that require community-focused solutions. And none of those solutions will come true until all members of the co

This post was written in collaboration with Joe Deshotel, Briana Medearis, Yannis Banks, and Chas Moore.

It’s been all over the news, but not everyone understands Black Lives Matter. So for this Thanksgiving, we asked folks who served on last summer’s #BlackLivesMatter panel in Austin to help us with this post.

So whether it's that conservative friend of yours on Facebook, your uncle at the Thanksgiving table, or Ted Cruz, we've got you covered.

FACEBOOK CONSERVATIVE SAYS: It shouldn’t be Black Lives Matter, it should be All Lives Matter!

YOU SAY: Black lives have been disproportionately marginalized in this country, from discriminatory laws, income inequality, a biased criminal justice system, and even the banking system. Black Lives Matter calls out the unique barriers to opportunity and justice Black Americans face every day. Think of it as “Black Lives Matter, too.”

Many black adults grew up in an era when racist housing policies ensured they lived across town. Black people have the right to vote, but new restrictions are still making it hard to vote. Through it all, black people continue to face a criminal justice system that treats them harsher than everyone else.

FACEBOOK CONSERVATIVE SAYS: If a law enforcement officer takes action against someone, that person probably had it coming.

YOU SAY: Every person has rights and equal protection under the law, and when those rights are threatened for some - they are threatened for everyone. We have seen too many videos of black people being pursued for petty accusations only to be killed in the name of justice. This is unacceptable.

Recognize that blacks are treated differently than others, with implicit and sometimes subconscious bias that “helps contribute to many racial disparities in law enforcement.”

Remember that bias and remember some of the names of Americans who are victims of that bias. There are many names, here is just a short list: Eric Garner, Michael Brown, Tamir Rice, Freddie Gray, Sandra Bland.

YOU SAY: There’s no easy way to say this: you’re making that up. No matter what Ted Cruz or Fox News want you to believe. #BlackLivesMatter is a movement that strikes at the heart of our core values of justice. It is not about violence; it is about taking meaningful action to stop violence.

Police accountability is about saving people’s lives and creating better opportunities between minority communities and law enforcement. And while some have chosen to continue a narrative that blacks and law enforcement can only be in opposition to each other...that actually perpetuates the problem.

FACEBOOK CONSERVATIVE SAYS: Black student protesters are really just thugs, they should sit down and be quiet.

YOU SAY: Student rallies are created some of the strongest protests in history, from opposing war, standing up for civil rights, abortion rights, marriage equality, and more. The student protest at the University of Missouri is no different and was a powerful response to the administration’s failure to address numerous racist incidents on campus. When the school didn’t take a stand, the students did.

Earlier this year, a similar student movement resulted in the removal of Confederate statues at UT-Austin. Now some student movements are taking on economic change such as the predatory practices associated with student loan debt.

FACEBOOK CONSERVATIVE SAYS: The problem isn’t the police, it’s all the black-on-black crime.

YOU SAY: False. White-on-white crime actually occurs at similar if not higher rates than black-on-black crime. In fact the term “black-on-black” crime was a narrative created in the 1980s that came out of fear of black people, not from any statistical or logical idea. Blaming Black Americans as being more likely to commit crime is wrong.

Organizations that work in Black communities have long-suffered injustices in our economic and criminal justice systems. After school programs, tutoring and mentorship programs - they exist to keep kids out of trouble. Unfortunately, they’re also the first programs that get cut when conservatives have control of the budget process.

When you lose that funding, you deny children the opportunity in school to progress beyond what they’ve experienced their whole lives.

FACEBOOK CONSERVATIVE SAYS: Black Lives Matter doesn’t have any real agenda, they’re just out to complain all the time.

YOU SAY: Yes, #BlackLivesMatter began as a movement and a feeling. But there are real demands that are part of the movement.

Nationally, Campaign Zero has an excellent outline of ten policies they would like to see addressed in communities across the country. In Austin, community organizers have met with mayors and law enforcement officials to talk about body cameras, de-escalation training, and tracking data for arrests and incidents between citizens and law enforcement.

The #BlackLivesMatter movement is sharing tactics from all over the country. But at the end of the day, it’s really community-focused problems that require community-focused solutions. And none of those solutions will come true until all members of the community - black, white and everyone else - recognize the problem and commit to doing something about it.