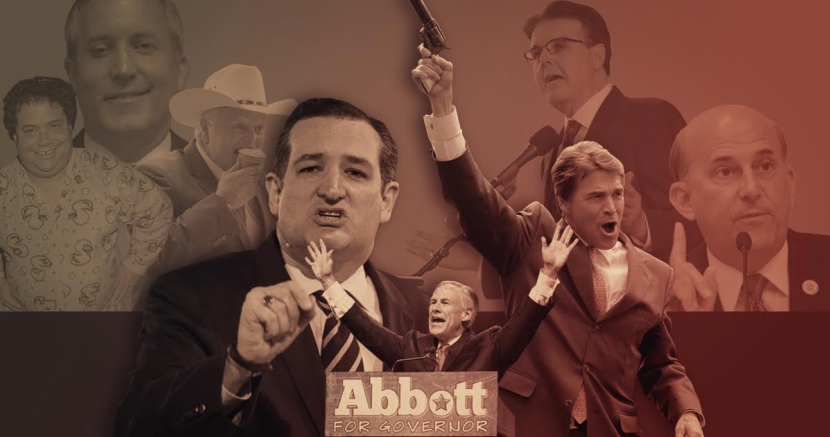 People often say that Texas is a red state, though it is more accurately described as a non-voting state. But with turnout that ranks among the lowest in the nation, restrictive voter laws, and an imbalanced system of redistricting, Republicans have gamed the system to create disproportionate representation in the state.

But one-Party rule is bad for everyone – including Republican voters.

It pushes the fringe elements of the Party to the forefront, heightening generally crazy policy positions, and ends up making us all look like Yosemite Sam.

Here are samples of how it hurts Texas…and then how we can fix it:

Texas Republicans have been sued for disenfranchising minority voters through heavily gerrymandered districts. The most blatant example is the “Optimized Hispanic Republican Voting Strength” strategy, in which a district is drawn to include a majority Latinos but only ones who have very low voter turnout histories – and then include a minority of high-voting Republicans to skew the electoral outcome.

And while Texas is one of the most diverse states in America, you wouldn’t know that by looking at our statewide office holders: 15 Republican men, of which 14 are Anglo. Not really diverse, and not one woman among them. Yet in a state where all the powers-that-be are all Republican, they’ll look out for each other before they look out for you.

The result of bad elections results in bad public policy.

According to polls, we know that Texans care greatly about public education and income inequality. But officials from heavily gerrymandered districts wind up dominating the conversation - steering the focus towards bills to open carry guns in public and on college campuses, efforts to usurp local control, and of course abortion (it’s always abortion with these people). There was a press conference in which Agriculture Commissioner Sid Miller wanted to put cupcakes back in schools. Meanwhile, public education cuts have still not been restored to pre-recession levels, income inequality bills went nowhere, and Texas continues to have the highest percentage of people without health insurance – while bills to address the issue languished in committee.

In addition to bad policy, there’s no real punishment for bad behavior.

When Texas Attorney General Ken Paxton was indicted on three felony counts, Governor Greg Abbott made no call for resignation or any other type of accountability, and to date few (if any) Republicans have. And though the claims against him were well reported for more than a year, no authority investigated Paxton until the Texas Rangers stepped in. This type of “politics before policy” is bad for the people the politicians are supposed to represent.

And just this week, a state official’s Facebook page featured a religious discrimination post, but he didn’t apologize and actually called it “thought provoking” (he’s capable of the provoking, still not sure of his ability for thought).  Then there are the repeated examples of Republicans calling for local control, and then doing the exact opposite on fracking bans, as well as expressing an interest to do the same on things like bag bans and non-discrimination ordinances. Bag bans!

One would think that it can’t be that hard to vote, but in Texas, they’d be wrong.

Texas still does not have online voter registration. There’s straight ticket voting, in which few voters may know who they are actually voting for since they can mindlessly pull a lever for a Party. There is the voter identification law that sounded neat on a bumper sticker but was so restrictive that it was struck down in court. The law was so restrictive that women who had their maiden name listed one ID and a middle name on another had to sign an affidavit, while a gun ID but not a student ID was considered valid to verify identity.

In short: One Party Republican rule can be described as “Politicians Gone Wild!” And that’s not good for anyone.

So how do we fix it?

1. VOTE.
First and foremost, Texans need to participate in greater numbers. We can blame the abysmal voter turnout rate on many things, but it is the one thing that people have the power to immediately change.

2. INFORM.
Keep up on the issues you care about, find your favorite publication and “like” it on Facebook so it shows up in your newsfeed, join an email list, volunteer. Organizations like Progress Texas regularly publish news to inform the public in quick formats, but you may find other sources that align with a particular issue that you care about.

3. ENGAGE.
Second, we need to talk about politics with our friends and family. It’s not always easy, but it’s always important.