Highlights of the 2016 Democratic National Convention 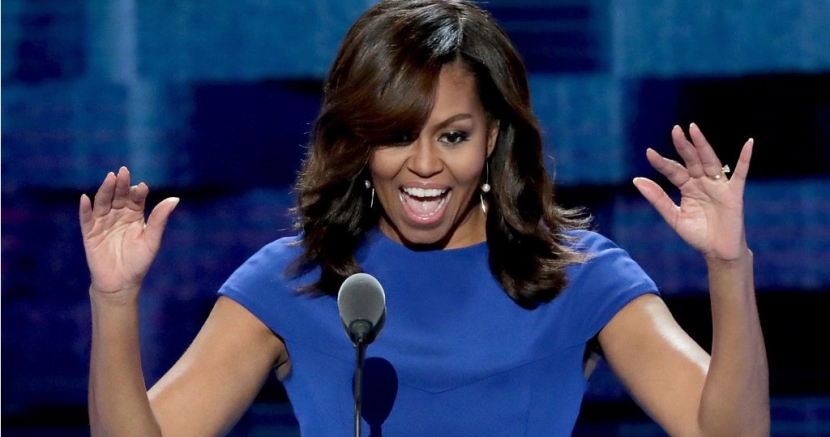 The Democratic National Committee are hosting their convention in Philadelphia this year. With all the positive energy all week, it's easy to see why they call Philly the city of brotherly love.

With a clear message of "Stronger Together" here's the top 5 highlights from each day of the DNC convention.

Hillary Clinton is officially the first woman nominated for President by a major American political party. I was there in the hall when she stepped on stage, and when she accepted the nomination, you could feel a burst of emotion from everyone who has been in her corner for decades.

You can watch her full speech here. Some of our favorite moments:

"I will be a president for Democrats, Republicans and independents. For the struggling, the striving and the successful. For those who vote for me and those who don't. For all Americans"

And then, there was this unforgettable section of her speech:

Most of all, don't believe anyone who says: “I alone can fix it.” Those were actually Donald Drumpf's words in Cleveland. And they should set off alarm bells for all of us....

2. Even Republicans Thought It was Great

The headline in this Talking Points Memo article pretty much sums it up: "The reviews are in: Conservatives say the DNC was a 'disaster' for the GOP."

3. Father of Muslim U.S. Soldier Scolds Donald Trump: Have You Read The Constitution?

In what will be noted for decades as a great political convention moment, Khizr Khan talked about his Muslim son's service in the military and subsequent death while fighting for U.S. interests.

With his wife at his side, Khan said, taking out a pocket copy of the Constitution, "Let me ask you: you have even read the United States Constitution? I will gladly lend you my copy."

San Antonio Congressman Joaquin Castro used his time at the podium to take aim at Donald Trump's disparaging comments to the Latino community. In talking about his own family experience and of those around him:

"No one's ancestors ever came here looking for the lowest corporate tax rate. People come here to be business owners, war heroes and public servants...doctors, police officers and - guess what? Even impartial judges."

Joaquin, in a true sign of his star power, was parodied by The Onion this week in an article featuring him and his twin brother and former San Antonio Mayor Julian Castro.

Ok, we have to do this. Because what's a political convention without the balloons?

He was just incredible – there's a reason some are saying it was one of his best speeches ever.

He laid it all on the line for Hillary:

And he told us what to do when we're mad at Drumpf:

And then he introduced Hillary, and she came on stage...

When you spot ya homie in the club... pic.twitter.com/sZq4u2qyI4

...and we saw history on stage. And we all smiled.

Always a champion of the people, Joe Biden made a strong argument that Donald Drumpf has no idea about what's best for the middle class...

...and reminded us all why he is our country's greatest happy warrior. Watch an excerpt of his speech here:

Tim Kaine was a city council member, then mayor, then Attorney General, then Lieutenant Governor, then Governor, then U.S. Senator. Now, he's in line to be the next Vice President of the United States.

And through it all, his greatest achievement may be that he's America's "coolest stepdad." His speech was so positive, even the internet fell in love:

During his speech, President Obama praised Hillary Clinton for getting in the arena to fight. He then stole a line from Ann Richards, saying that she campaigned just as hard as him - only she did it backwards and in heels.

The woman in the arena.

Finally, at the Texas delegation's morning breakfast, delegates got one last chance to wish Austin State Representative Elliott Naishtat a fond farewell for his decades of public service.

1. Bill Clinton Tells the Story of How He "Met a Girl"

President Bill Clinton gave the keynote address last night, and talked about when he first met Hillary Clinton. He shared this, about her work in Texas:

Hillary opened my eyes to a whole new world of public service by private citizens... Then she went down to South Texas, where she met one of the nicest fellows I ever met, the wonderful union leader Franklin Garcia, and he helped her register Mexican-American voters. I think some of them are still around to vote for her in 2016.

2. Cecile Richards Promises Donald Drumpf: "Women Are Going to be the Reason You're Not Elected"

If you want to feel great today, watch this.

Congressman Joaquin Castro, who speaks on Thursday, continues to be asked if he'll run against Ted Cruz in 2018. And he continues to not say no. Watch the clip here:

5. Mothers of the Movement Back Clinton

"I wake up every morning in a house that was built by slaves. And I watch my daughters — two beautiful intelligent black young women — play with the dog on the White House lawn."

Her speech was so good it knocked the socks off of two presidents...

"Let us declare again that we are a nation of interdependence, and in America, love always trumps hate." Chillllls.

3. Bernie Embraces Hillary, Encourages Supporters to Do the Same

Sanders talked about his political revolution, and how it's led to the most progressive platform in DNC history. He then went through an amazing policy rundown of what he's fought for - and how Hillary Clinton can see it through.

She's pretty great at this

Drumpf's entire campaign is just one more late-night Drumpf infomercial... And for one, low, low price, he'll even throw in a goofy hat.

As always, Democrats get way better music than Republicans.

BONUS: Progress TX in the News

We're providing rapid-response for the convention all week. Here's some of our clips: