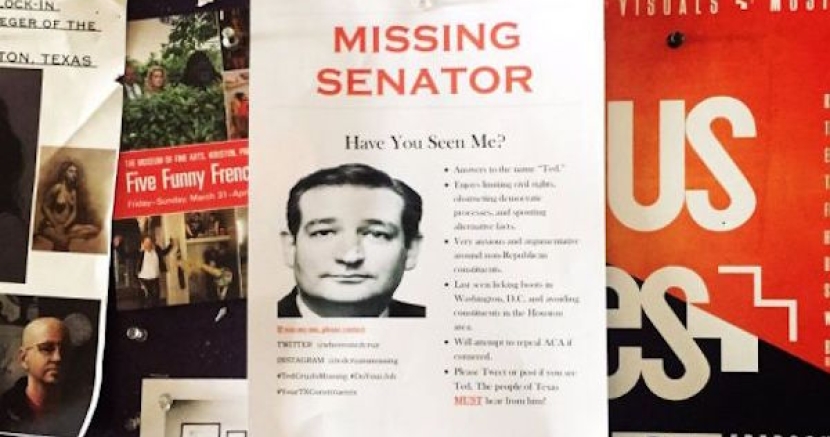 Has Anyone Seen Ted Cruz?

As the United States grapples with a White House in chaos, Texans are looking for leadership to stand up to questionable activities of the administration. Yet one of our most prominent representatives in Washington, Senator Ted Cruz, is nowhere to be found.

It seems that Ted Cruz is instead following the lead of Republican representatives who continue to avoid their constituents at any cost.

Texans are not the type to be ignored.

On issues ranging from healthcare, immigration, LGBTQ equality, to voting rights and more - Texans are demanding answers. But to date, Ted Cruz has not made meetings widely available and it appears that his office isn’t even answering phones. This isn’t the first time Ted Cruz has been absent: shortly after his presidential campaign ended, we wrote about how Cruz went missing in 2016.

Houstonians are taking matters into their own hands, carrying out a “search campaign” to find the missing, or hiding, Ted Cruz.

They are demanding Cruz meet with the people he represents and hear their concerns, posting “Missing” flyers on telephone poles and bulletin boards around the city. The flyers state that he “answers to the name Ted” and “will attempt to repeal ACA if cornered.”

This is the latest in a series of events where Texans are taking action and demanding accountability from elected officials. The bipartisan movement sends a strong message to elected officials that they need to do their job or lose it. Houstonians are holding a Town Hall for Texans to gather in hopes Cruz will show up. The “Ted Cruz is Missing” campaign has garnered a groundswell of support and enthusiasm from constituents who refuse to be avoided by a man who, as a public servant, works for and represents them.

You can find details and RSVP to the event here.

Progress Texas has spent quite a bit of time chronicling the weird, extreme, and absenteeism of Ted Cruz. Visit CruzWatch.com to for articles ranging from climate denialism to his hatred for avocados.