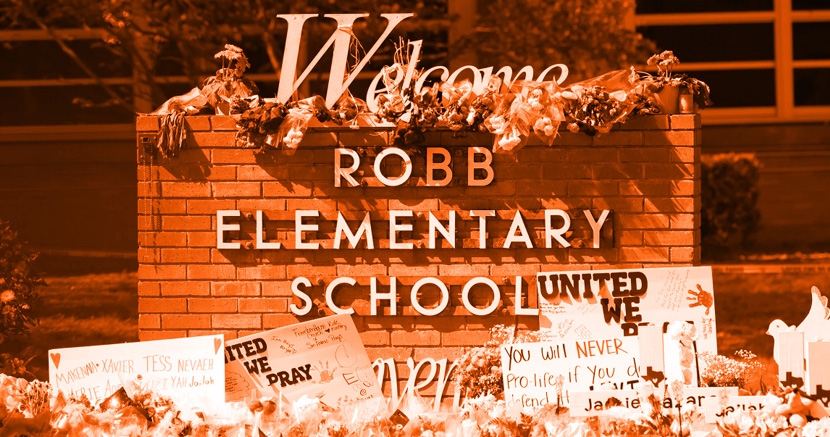 Arabella Cadena
In the wake of Uvalde, Texans deserve more than empty words

Orange is the color that hunters don to protect themselves from gunfire. Orange is also the chosen color of gun violence prevention advocates. The color screams—pay attention, recognize my humanity, don’t shoot. On National Gun Violence Awareness Day and the subsequent Wear Orange Weekend (June 3-5), people across the country join together to honor the more than 110 people who are killed by guns in our country every day. This weekend we remember the 19 children and two teachers from Robb Elementary School, the 22 victims from El Paso, the ten dead from Santa Fe High School, and the countless others who have lost their lives to gun violence in Texas and across the nation.

In an average year, 3,647 Texans die by guns. Of the 85 incidents of gunfire on school grounds in the U.S. in 2022, seven have occurred in Texas, more than in any other state. We wear orange to demand that pro-gun Texas lawmakers take their hands off the trigger because they are as culpable for these deaths as the shooters. In 2021, after the El Paso and Odessa shootings, Governor Abbott actually made it easier to obtain a gun in our state. Latinx communities have been disproportionately affected by gun violence in Texas. The words that Texas Republicans use matter and using xenophobic, far-right conspiracy theories to vilify Latinx immigrants only fuels the hate that leads to crimes of domestic terrorism. Lawmakers must take accountability for their violent laws and words. It’s time for Republicans to set aside the guns and the NRA dollars they receive, in favor of creating a safer Texas.

Here are five common-sense gun reforms that the Texas Legislature should take up now:

In 56% of mass shootings, the shooter exhibited dangerous warning signs before the shooting. Including the shooter at Robb Elementary School in Uvalde, Texas. Red flag laws, also called Extreme Risk laws, allow loved ones or law enforcement to intervene by petitioning a court for an order to temporarily prevent someone in crisis from accessing guns.

In Texas, an 18-year-old is prohibited from buying handguns but can legally purchase rifles and shotguns. Salvador Ramos, the Uvalde shooter, legally purchased two AR-15s days after his 18th birthday. Make it make sense: you can legally buy a deadly weapon before you can drink alcohol. On either the state or federal level, the minimum age to buy rifles must be raised to 21.

A waiting period law would require a certain number of days to pass before a gun purchaser can actually take possession of the gun. Waiting periods are designed to prevent people experiencing suicidal thoughts from accessing a gun. 60% of gun deaths in Texas are by firearm suicide, waiting periods are vital to suicide prevention in Texas.

Following Uvalde, Governor Greg Abbott has called on the Texas Legislature to form special committees to make legislative recommendations. The legislative solutions Governor Abbott seeks already exist, and the five common-sense gun reforms above are a good place to start. Texans don’t need more talking, we need action. Instead of calling for committees, Governor Abbott must commit to calling a special session to enact stricter gun control laws. Laws that according to a recent poll, a majority of Americans (59%) favor.