Greg Abbott prefers his chicken with a side of hate 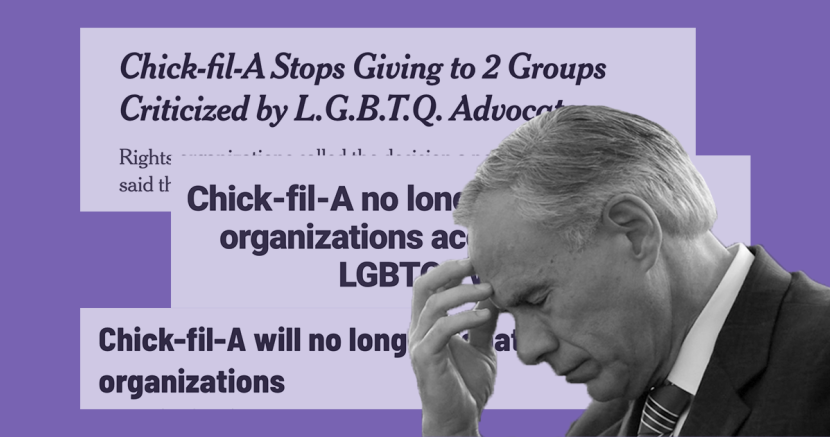 Earlier this year during the Texas legislative session, Republican lawmakers sought to give government officials, licensed professionals, businesses, and others the right to discriminate against LGBTQIA+ individuals through Senate Bill 1978.

The bill, which conservatives deceptively coined the “Save Chick-fil-A” bill, had little to do with Chick-fil-A. The bill sought to redefine religious freedom, take power away from local governments, and allow for discrimination based on gender identity and sexual orientation.

Yesterday, Chick-fil-A announced plans to stop their longtime funding of anti-LGBTQIA+ organizations, after years of effort by LGBTQIA+ activists.

There’s been speculation as to whether Chick-fil-A will actually stay true to their word, given their history. But either way, some folks celebrated the decision as a step in the right direction for the company.

Others, on the other hand, were not happy. Gov. Greg Abbott, for example, took to Twitter to voice his disapproval and exposed his homophobia once again.

This is the same governor who couldn’t get enough of Chick-fil-A just a few months ago.

So. What are the odds I’ll sign the Chick-fil-A bill?

I’ll let you know after dinner.

It seems Texas Republicans are only in favor of lawmaking for businesses when those businesses use their money to hurt marginalized communities.

All Texans should be disturbed by Abbott’s homophobia.

Chick-fil-A’s donations do not directly impact Texas conservatives. But the company’s funding of anti-LGBTQIA+ organizations was harmful to the queer community. See the difference?

Unfortunately, that distinction doesn’t matter to Texas Republicans because the cruelty is the point.

Abbott and others who supported the “Save Chick-fil-A” bill and are now angered by this news are just looking for an excuse to cry foul and lament about “attacks on religious freedom.”

Not only is their indignance over the whole ordeal tiresome, but it’s also hypocritical considering just a few months ago, they were on the opposing side trying to justify Chick-fil-A’s decisions and arguing that the company should be allowed to donate to whatever organizations it wants.

This is a win for queer Texans and a testament to the power of holding corporations accountable.

Chick-fil-A’s announcement is cause for celebration. Not to bolster the company for making the right decision after years of funding anti-LGBTQIA+ organizations, but to acknowledge the work of LGBTQIA+ activists who worked to hold Chick-fil-A to account.

The newly formed LGBTQ Caucus said it best in their response to Abbott’s tweet:

United against discrimination that hurts Texans and Texas. Our founding members remind @GregAbbott_TX that #WordsMatter and #lovewins . #txlege pic.twitter.com/XoIa0qhjo8

While Texas Republicans continue to encourage discrimination and harm queer Texans with their words and actions, progressive Texans are building power, and we’re on a path to equality in 2020.

We hope Abbott enjoys his Bill Millers. We’ll be picking up Popeye’s for lunch in celebration of Chick-fil-A’s “change of heart.”