Greg Abbott, Dan Patrick Double-Down on Their Support for Trump 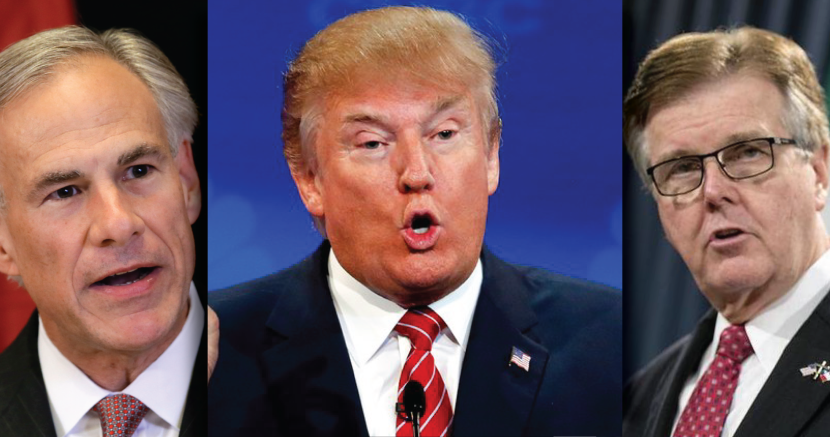 Donald Trump is the most offensive politician in history and is performing poorly in recent Texas polls. But that doesn't mean Texas Republicans are worried about him.

In fact, just the opposite. It seems they can't embrace him enough.

Check out our list of every Texas Republican publicly supporting Donald Trump.

From the Texas Tribune: "Abbott Says He's Fully Behind Trump, Hopes for Double-Digit Win in Texas"

"Trump is stepping up and doing what Texans are asking for, and that is securing the border," Abbott said, later adding, "I think Trump understands the necessity and the ways that we can reduce regulations."

"My primary goal is to unite our party in Texas," Patrick said in a statement Friday announcing the new role. "I want to ensure a solid Trump win and to remind Republican voters, and the new Trump voters who came out in the primary, to support the entire Republican ticket from the White House to the Court House."

In a separate statement, Trump praised Patrick as a "passionate conservative who has been a good friend to our campaign." Joshua Jones, Trump's Texas state director, said one of Patrick's responsibilities will be to recruit supporters from Texas to volunteer in battleground states.

Whether or not either politician will pay a price for so publicly endorsing Donald Trump remains to be seen.