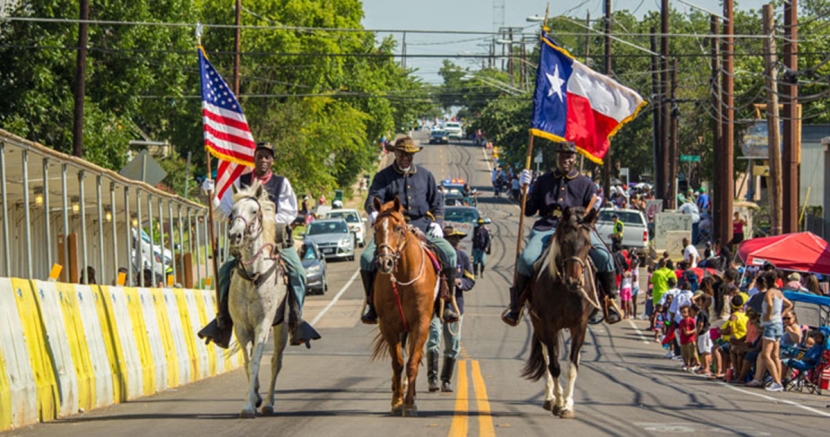 When I was growing up, Juneteenth marked the true beginning of summer. There were parades through the streets of Fort Worth’s Black neighborhoods. Family would gather at my grandparents’ house to eat barbecue and listen to music and fellowship and be Black together. We did those things for the Fourth of July, too, and for Labor Day, but I loved Juneteenth because it was ours. A celebration and release for Black Texans. A commemoration of the historic date when enslaved people in Texas received word of their freedom – two and a half years after the Emancipation Proclamation had freed them by law. My granddaddy, who would have turned one hundred this year, made sure we all knew the story of Juneteenth, his favorite holiday. He made sure we knew a lot of things.

My grandfather, Marion Jackson Brooks, was born and raised on Fort Worth’s Near South Side to parents just one generation removed from slavery. He was one of four brothers, each of whom served his country in WWII. Three made it back alive to an America that refused them the freedoms for which they had risked their lives.

Granddaddy felt called to serve his community in a fundamental way. A product of two HBCUs (historically Black colleges and universities), he attended Prairie View A&M University and, after his military service, Howard University College of Medicine. His medical education happened without the help of the GI Bill, which provided access to higher education for returning servicemen. The GI Bill, like so many progressive-era programs that built this country’s middle class, specifically excluded Black people.

During the early years of his medical practice, he treated his patients in the basement of Fort Worth’s St. Joseph’s Hospital, because Black people were barred from the main wards. Patients sometimes came to Granddaddy after having been attacked by local racists. I’ll never forget his story about treating a Black elevator operator whose skin was sliced and bruised by a prominent, white Fort Worth business leader who had beaten the young man with a cane for missing his floor. Years later, as a college freshman, I was assigned to live in a building named after that white man.

Granddaddy watched as Black Fort Worth spread and grew over the years, predictably angering some white residents. Black homeowners faced bombings. Granddaddy turned political, becoming deeply involved in the Civil Rights Movement. Among other actions, he founded a group called the Tarrant County Precinct Workers Council, dedicated to eliminating the poll tax in Texas. The poll tax, of course, was in effect in Texas until 1966, and Texans continue to face discriminatory, suppressive barriers to voting even today.

In fact, much of Granddaddy’s work is painfully relevant today. He wrote this in an op-ed in 1973:

Practice of government by division, suspicion, usurpation of power, oppression, and privilege automatically leaves [Black communities] out and damages the nation even for the majority.

Because Granddaddy made sure of it, here are some things I know:

Our current political moment is what happens when white America rejects coalition with Black communities. Progress has only ever happened in this country in broad coalition. And by “broad coalition,” I don’t mean Black people crossing over to hold hands with white people to create a brighter tomorrow. It’s white people lifting the voices and protecting the bodies of: Black people; Brown people; women, especially women of color; gay, trans, and nonbinary people; immigrants; and people with disabilities. Because a country where the most marginalized among us can thrive is a country where everyone thrives. And a country where only the most privileged can thrive will ultimately fall.

There is no “new” Texas.

Texas has always been a place of diverse communities and progressive values. This isn’t the new Texas; this is Texas, period. If you’ve joined the ongoing fight for a more progressive Texas in the last few years, or the last few weeks, welcome. If you eventually decide it’s fine to step away from that fight once your personal goal – be it flipping the Texas House, or dumping Trump, or something else – is met, we’ll miss you. But we’ll still be here fighting. We’ll still be here, doing the time-tested work that we know can move Texas, and our country, forward.

Because for our communities this fight isn’t about shock or sadness or a need to get back to normal. It’s about our physical safety and wellbeing. It’s a fight for our very lives. If the last couple of months, or years, has left you feeling suddenly marginalized or disenfranchised or unsafe: you now have some small sense of what Black and Brown people experience in this country every single day of our lives. You’re also beginning to understand what it really takes to achieve change.

You know those kitchen gadgets that perform some completely straightforward task in an unnecessarily complicated way, like “innovating” the peeling of vegetables when it’s quicker and more effective just to use a knife? Granddaddy had a habitual sardonic response whenever he encountered the newfangled: “What will the white folks think of next?” I hear his voice often these days, whenever some new, “fix democracy quick” scheme rears its head. The plain truth is that there is no quick fix for democracy.

Democrats haven’t been strangling under Republican leadership in Texas for years because the Black and Brown communities to whom so much of the fight for progress has been left don’t know what we’re doing. We’ve been strangling under Republican leadership because of long-term underinvestment in our progressive infrastructure, deliberate voter suppression and voting rights violations, and the fickleness of so many of the white Texans whose aforementioned coalition is necessary to achieving change.

The good news is, we know what we need to do, and the solutions are the same as they were in my Granddaddy’s day: take Black voters seriously, organize consistently, invest substantially, and elevate candidates who actually belong to the communities they seek to serve. Do that day-in and day-out, forever. You don’t need a newfangled theory of change, and the brave protesters taking to the streets across our state and country in the name of preserving Black lives are the best possible proof of the efficacy of traditional organizing. To effect real change, let’s all just agree to use a knife.

Despite having been born into a Texas and an America that systematically insisted that Black people were worth less than white ones, my Granddaddy was unshakably proud of his Black identity and permanently committed to fighting for the well-being of his community. He knew that the wellbeing of the Black community he loved depended on the strength, safety, and freedom of Black women. It’s why he was so committed to his time as an OB-GYN practitioner. He improved maternal outcomes for multiple generations of Fort Worth women and their children by providing one of the only medical options for Black childbirth in Fort Worth. Of course, Texas struggles even now with one of the highest overall maternal mortality rates in the country, with Black mothers in Texas twice as likely as white mothers to die a pregnancy-related death.

Granddaddy made sure we understood the breadth and beauty of Black life and culture. Crispus Attucks, Dr. Charles Drew, Marian Anderson, Gordon Parks, Angela Davis, Bobby Seale, Sarah Vaughan, Joe Williams, Joe Louis, the Tuskegee Airmen, the Tuskegee experiment, Alvin Ailey, the Nicholas Brothers – these and more exemplars whose Black lives have mattered so much not only to Black America, but to America and the world -- were required knowledge at Granddaddy’s house. Not to mention the entirety of James Weldon Johnson’s Negro National Anthem (and Granddaddy would absolutely clown anyone who needed to look at the words). That sense of Black pride – of Black joy – grounded his commitment to the fight for social and racial justice, and gave him the fuel to carry on in the face of the white supremacy embedded in America’s very foundation.

Those of us who have come after him have inherited that Black pride and Black joy, and this Juneteenth, it continues to fuel us now.