Gov. Abbott and conservative ideology left Texans in the dark 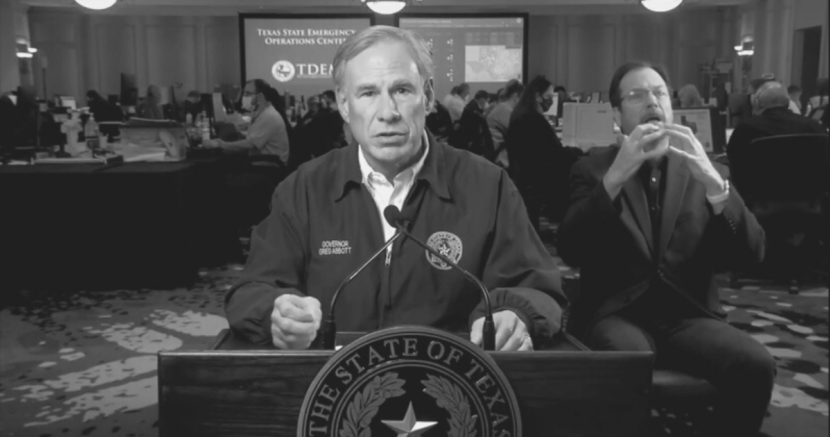 Abby Springs
Our governor is responsible for the biggest energy disaster our state has faced in decades.

The Texas winter storm of 2021 has been traumatic for our community. Texans were left without power for over four days, many still don’t have running water, and at least 80 people have died as a result of the disaster. It’s an act of nature compounded by the failures of man, the biggest natural disaster our state has faced in decades, and we were entirely unprepared.

In the aftermath of the crisis, Texans are looking for answers, and the blame for our state’s latest climate catastrophe lands at the feet of Gov. Greg Abbott.

Abbott and conservative ideology have failed Texans. Together, they’ve proven incapable of protecting Texans from disasters and helping us once we’re in one. To make change, we must hold our leaders accountable, and that means understanding how Abbott and the GOP left Texans in the dark.

Before the winter storm

In the aftermath of the winter storm, Gov. Abbott has placed blame on ERCOT, the agency responsible for operating Texas’ electric grid. Conveniently, he’s also minimized his own role in failing to prepare for this crisis.

While ERCOT handles the flow of electricity, the Public Utility Commission is the agency that regulates it. Each member of the PUC is nominated directly by the governor, and all three members were nominated by Gov. Abbott. For years, our state government has known that winter storms pose a threat to our power supply, thanks to a 2011 federal report that warned us to winterize our energy infrastructure. However, Abbott and his hand-picked Public Utility Commission have refused to act.

Texas’ history of deregulation also played a major role in the winter storm. In the 90s, Republicans gave control of our state’s energy to private companies. This meant that the rules governing our power grid were mostly set by the market, not the state. Combined with ERCOT and the PUC, which are “nearly unaccountable and toothless,” Republicans set our state up for a deregulated disaster.

If you follow the money, you’ll see that Abbott’s biggest donors come from the energy industry. He chose to put profits before people, and as a result, Texans died. Abbott supports the same “small government” ideas that landed us here in the first place. Republicans want a government that governs less, but that means no one is stepping up to protect us from catastrophe. With climate change impacting more Texans each year, we need government support, not abandonment.

But of course, Gov. Abbott has refused to protect us from climate disasters and hold corporations accountable. Just weeks before Texans faced record low temperatures, Abbott vowed to fight Biden’s crucial energy and climate agenda. He’s also refused to acknowledge the role of climate change in Texas hurricanes, sued the Obama administration over clean air and water issues, and taken over $26 million from the oil and gas industry. Not only is Abbott failing to act — he’s accelerating the destruction of our planet and our state.

While Gov. Abbott’s decisions meant a climate disaster was inevitable, he still had a chance to lead by helping Texans during the storm itself. But don’t count on Abbott to help out when you’re freezing in your home.

Instead of addressing Texans suffering in the cold, Gov. Abbott went on Fox News and lied about climate change. Abbott was widely criticized for his comments, where he falsely blamed the unfolding disaster on environmental policies and renewable energy. At a critical moment, he could have been on calls with energy officials, requesting aid for Texans, or talking with local leaders to coordinate relief efforts. Instead, he was spreading lies on national TV.

In fact, Abbott had little to offer Texas throughout the entire crisis. He’s continually shifted blame, avoided accountability, and refused to use his platform to direct Texans toward aid and support. While AOC, Beto O’Rourke, and Texas organizers were on the ground helping struggling families, where was Abbott? We’re still not sure.

Texans deserve a governor who will work to prevent crises, tackle climate change, and support Texans during disasters. Gov. Abbott is running for reelection in 2022 — we need to do everything we can to kick him out of office. The future of Texas and our planet depends on it.